Since we're descending into the "worst economic crisis since the great depression," I thought we should start dressing the part. I had this giant pile of pants that needed repairs (mostly holes in the knees) building up over the last year, and what better way to spend a grey weekend while sick than patching up jeans? 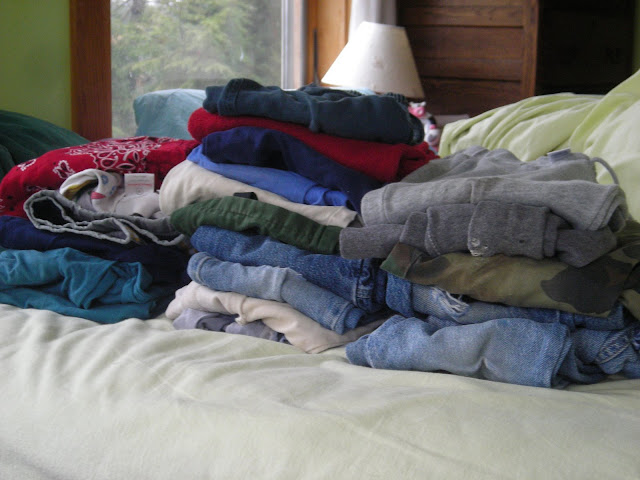 I found that patching was not at all difficult or unpleasant, and actually kind of relaxing. In the end I patched one or both knees in 14 pairs of pants, replaced the elastic in three (notably three of which I had made--oops), turned two into shorts and relegated one beyond-repair pair to the rag bag. I was hoping to hang them all on the line for a photo, or at least get a couple of knees in their patches, but since our camera spends most of its time at work with C, and I never really had the energy to hang out laundry that actually did not need to be hung out, you get this, the finished pile: 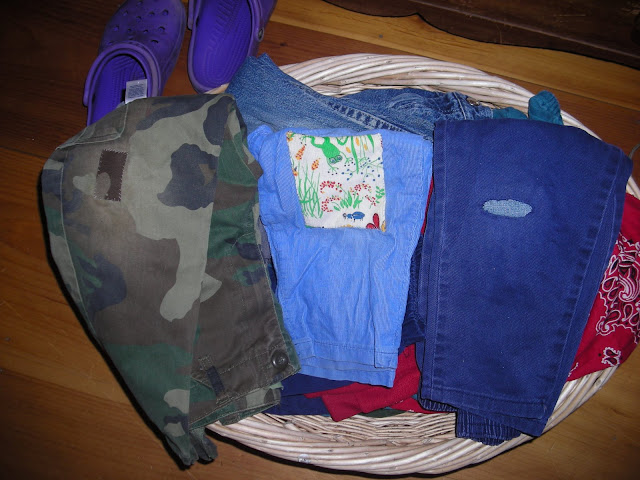 On most of the pants, I did invisible patches (tutorial here), like in the dark blue pair (they look a lot more invisible when you actually use the same color as the pants for the patch). I thought the frog corduroy would make a cute patch on the light blue pants, but Z, whose pants these were hates it (E loves it though, and calls it a "pouch"). M was most impressed with the camouflaged patch on his favorite camo pants (and I was impressed that I found a tiny piece of camouflage fabric in a box of swatches I got from an outdoor store many many years ago).

Now I just have to start darning those socks…


Speaking of Great Depressions, maybe it's just that it's November, or that it's been grey and drizzly for days (weeks?--although today is blue and sunny), or that I have had this cold/flu/conjunctivitis/sinus infection/cough/sore throat for two-and-a-half weeks (I swear to god I'll stop whining about being sick as soon as I'm not sick anymore), but I am feeling LOW. It may have started with reading The Crying Indian article in Orion, which you can't get online yet, but which is basically about the usual story of how the government and corporations conspired to destroy the environment and manipulate us people. Then today I read this letter from Michael Pollan to the president-elect about food policy, which I guess is intended to be hopeful--we can change this--but the unlikelihood (unless Obama appoints Pollan to Ag. Secretary--is that possible?) seems great and overwhelming. Once in a while I get this sense that we're part of a feudalistic system with corporations, governments and really rich guys at the top and the rest of us blissfully shopping away our ignorance at the bottom...and I know I should feel really hopeful after the election (along with the rest of the world) but I wonder if the only real difference between Republicans and Democrats is that Democrats just want to make life a little more comfortable for us serfs...with no real desire to change the system...


Have I depressed you yet? This is why my friend JM dropped off a copy of season one of Thirty Rock at my house a few weeks ago. "I think you need some laughs," she said. You are so right, sistah.

Maybe a joke (stolen from my friend Sara) will help:


Two butterflies and a millionaire walk into a chainsaw massacre... 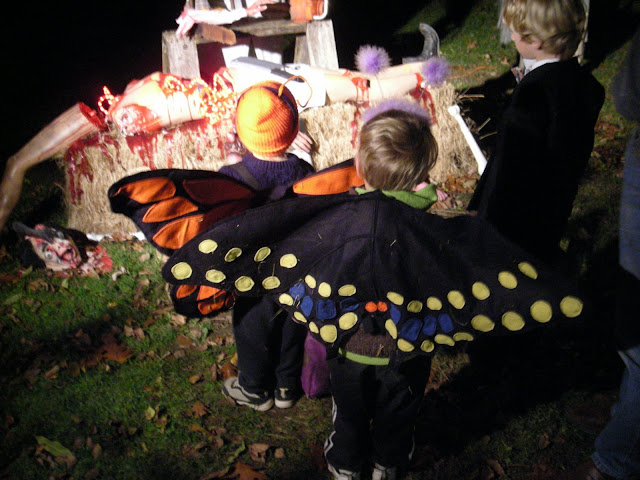 Email ThisBlogThis!Share to TwitterShare to FacebookShare to Pinterest
Labels: Buy Nothing Year