We went on a camping trip over the weekend, with four other families (there were seventeen of us altogether) and the beautiful and secluded group site, Mud Brook, in Lily Bay State Park on Moosehead Lake. 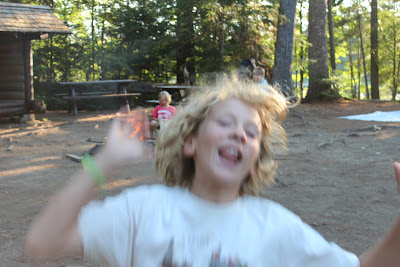 As we were packing to go Friday, in that kind of very hot and humid weather that makes you hate the world (and I had already been feeling, for the last week or so, that everyone, and I mean everyone, was on my nerves, although it is hard to stay grouchy when whenever I thought about how much everyone was on my nerves I could hear my children's voices in my head saying, "On your nerds?" which is what they say whenever I tell them that they are on my nerves) and I kept groaning, "Isn't anyone going to help my pack? Doesn't anyone else want to go camping? Why am I the only one getting ready here?" as I cooked up and prepared my usual pre-camping food (pizza dough, pizza toppings, two kinds of granola bars, cornbread mix, etc.). 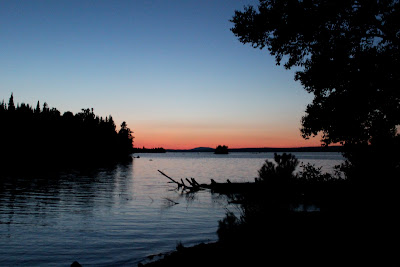 We finally got on the road only an hour later than planned, when we realized that the loud noise I had ignored the day before was the front muffler developing a very large and noisy leak (I had just had the rear muffler replaced two weeks earlier) and the burnt rubber smell I had also tried to ignore was the front right brake caliper sticking (I had just had the rear brakes done two weeks earlier). 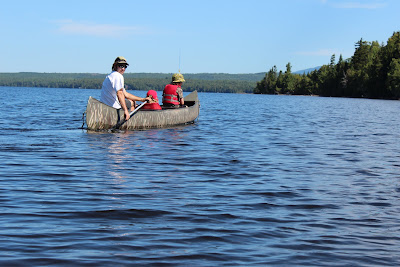 While I ran into the grocery store, C called our mechanic, who told him to bring the car right in and he put it up on the lift, canoe and all, and replaced the caliper (the muffler, though, has to wait until next Thursday; in the meantime I'm driving around sounding like an entire fleet of Harley Davidsons). This is why we have to keep driving crappy old Volvos--because we have a mechanic who will fix them when they break down on a Friday afternoon even though he is technically closed. It is a vicious cycle. 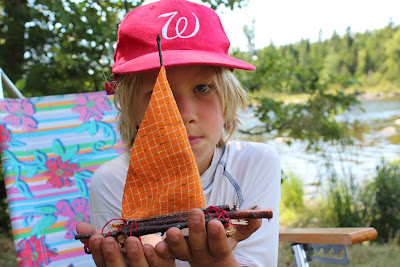 By the time we got to camp, though, just a few hours later than hoped, we forgot all our troubles (other than the really loud muffler, which was kind of hard to ignore). 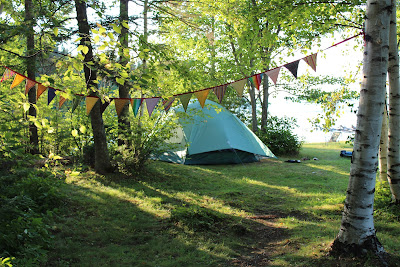 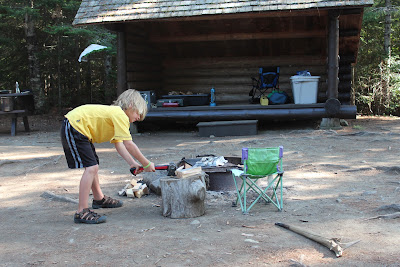 I made a couple of new recipes this time: these energy bars, which were so super good that I'm going to make them again this weekend for my niece who is going to visit and eats gluten-free, and this soup, which was such a great camp food (what with it using canned food that kept without worry of going bad, what with the cans and all). There was no way to puree it in camp (I meant to bring a potato masher, but I forgot), but it was delicious all the same. We served it with some veggie chorizo (I had intended to also get the real thing, but the farm store near us was having a freezer issue when I went there) and blue cornbread cooked over the fire, which actually worked amazingly well (it ended up being very dense and moist, cakey rather than bready, but very very good). 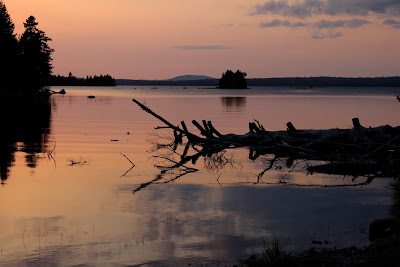 The wind came up Sunday, when we went around the lake to climb Mt. Kineo, stirring up ocean-sized waves that tossed the water taxi about like a little toy boat. 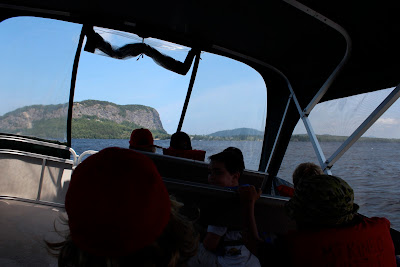 I had been thinking that we should take the boys up Mt. Katahdin next summer, but oh, my, that little hike kicked my butt. As C says, I have a whole year to get in shape (ugh). Here's M coming down the fire tower at the summit: 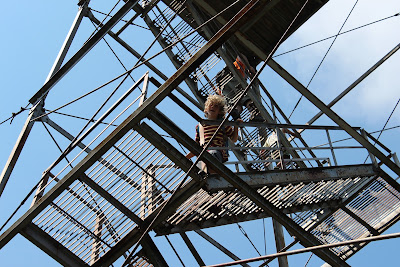 And here are all the little people, as seen from the top: 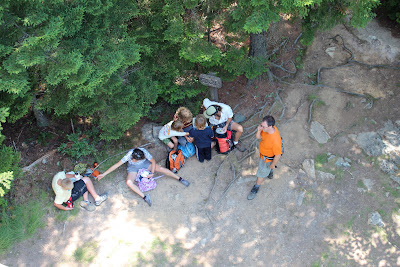 And the view looking out: 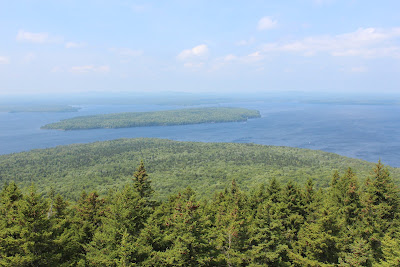 With six seven-year-olds and two eleven-year-olds in camp, there was a lot of refereeing of playground politics, which is not my favorite thing in the world to do 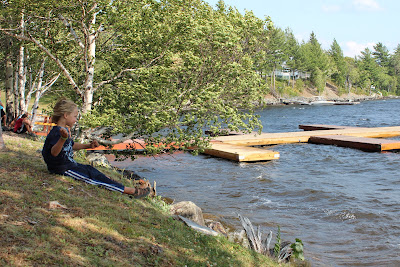 But also plenty of playing and having fun. 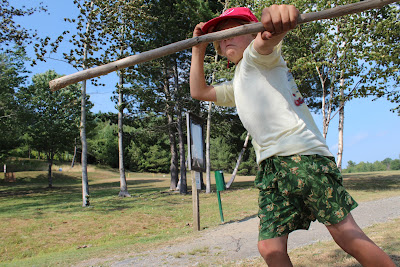 It's so hard to know when to intervene and when not to, don't you think? 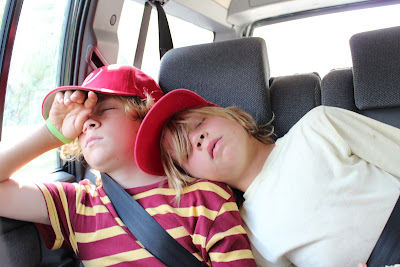 I would prefer just letting them all work it out on their own, but some kids need a little direction in that department...and of course I don't want my kids being mean to others. 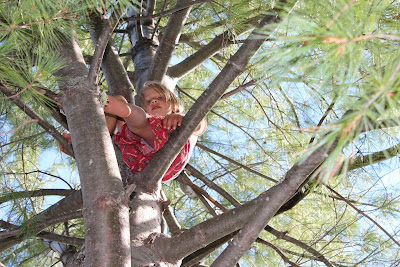 With all of the kids and all of the fun, there were no serious injuries (Z did manage to fall out of a tree about five minutes after we got there--he was winded and sustained a scrape, but otherwise fine; and he learned a good lesson about not using dead branches for support). 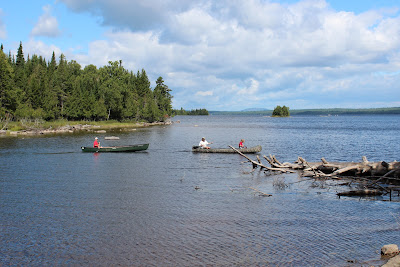 M stayed an extra day with his friend and his friend's mom, which left a lot of extra room in our car (that and having burned up the wood C insisted on bringing). We stopped in Newport for an ice cream dinner Monday evening, and before we left, I just had to take a picture of our funny car, loaded down with stuff and cammo canoe (borrowed from a friend). A scrawny old bearded man who looked sort of hobo-ish and appeared to be collecting cans in the street came over after I snapped this photo and said, "Were you taking my picture? Cause I'm camera shy." 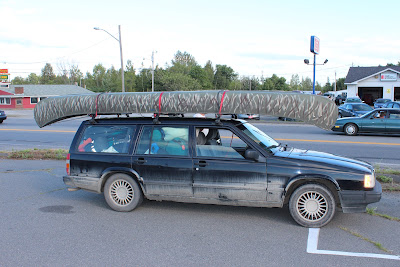 I didn't do any school-related work all weekend, not even reading either of the two books of short stories I brought along (instead reading most of Cheryl Strayed's Wild, which I bought to read for fun). I did a lot of nature journaling, but no short story writing. I did, however, manage to get my first packet in the mail today (only three days late--and yes in the actual mail; that's how my mentor wants it). At one point the thought crossed my mind (when I was mentally berating myself for doing no work over the weekend), "fiction has nothing to do with my real life." Hmm, not to over-analyse that comment, but what did I mean by that??
Posted by Andrea at 4:03 PM