A monthly recap of books I've read. For past months, see: 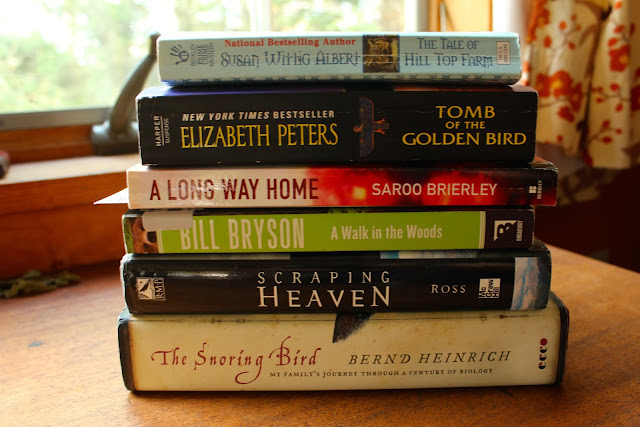 Fiction.
I wasn't going to take any fun reading with me for my week at the artist colony, but I gave in at the last moment and packed the last installment of the Amelia Peabody mystery series by Elizabeth Peters (about which I've been regaling you since May) and I'm so glad I did. Reading it was the perfect way to wind down in my cottage after a day of focusing on my own writing, and this book, a satisfying, happy ending to the 20-book series was the perfect choice. After returning home, I read The Tale of Hilltop, which is the first in a series of Beatrix Potter mysteries by Susan Witting Albert. You can see I'm in the mystery mood these days; they're such soothing escapism. And this one in particular is the coziest of cozies (barely even a dead body at all). It was a little slow to ramp up, with a lot of different characters to outline, but ended up being pretty entertaining. I have a fascination with Victorian and Edwardian era women naturalists, and the book brought in a lot of personal and historical detail about Potter's life.

Read-Aloud
One of the boys' grandmothers started reading A Long Way Home by Saroo Brierly to them while we were at camp over Labor Day weekend, and I brought it home and finished. The movie Lion is based on this story, about the little boy in India who accidentally ends up on a train to Calcutta, 1600 miles away from his home. Two, book and movie, complement complement each other wonderfully. The book gives a lot more details about what life was like for Saroo as a boy in India, how he adjusted to life in Australia, and how he managed to remember enough details to get him back home. And the move has such wonderful visuals, it really makes the book come alive. By the end, I was only reading to E (Z prefers to go and do his own thing) and then he and I watched Lion together. He was very concerned with the discrepancies between book and movie, and got a bit bored with grown-up Saroo (and fell asleep).

Nonfiction
While on my writing retreat, I read two books to help me get into the long-distance hiking chronicle mode: Bill Bryson's A Walk in the Woods and Scraping Heaven by Cindy Ross. I'd read both of these before, and in fact Ross's book, about hiking the Continental Divide Trail over five summers with two little kids, helped plant the seed of a big trip, way back when the twins were little. The only thing I remembered about Bryson's book was that it was funny, but I'd forgotten just how funny. Actual laugh-out-loud. But he also incorporates a lot of information while being funny. I had originally thought my book would be humorous, but the reality of the depressing environmental stuff I want to address in it didn't seem to lend to humor. Yet Bryson somehow manages to be funny even about the destruction of the world and he's inspired me to at least try to inject some humor, even though I know I could never be a tiny fraction as funny as he.

I picked up The Snoring Bird by Bernd Heinrich at a conference a few years ago, but hadn't read it yet because it seemed like such a tome that would involve a huge commitment of time. Then I was talking to a friend about it a while ago and she told me "It's a page-turner," so I gave it a go and she was right. I tore through it in a week! The book tells the story of Heinrich's father, a naturalist of the late 19th and early to mid-twentieth century, who had an obsession with ichneumon wasps. I know that doesn't sound like a page-turner, but after reading through several of the elder Heinrich's brushes with death, as a pilot in World War I and II, while collecting specimens in far-flung jungles, and escaping Poland ahead of the Red Army, you won't be able to put it down. The book then follows young Bernd through his childhood in Germany and Maine (where his parents placed him and his sister in a boarding school while they went to Africa on collecting trips). Though fewer brushes with death occur, it continues to hold interest. Bernd struggles to differentiate himself from his father (studying honeybees rather than wasps) and as biological sciences evolve from taxonomy to research, son further distances himself from father. Yet, even as Bernd analyzes his father's motives and behaviors, he fails to bring awareness to the way he recapitulates his father's utter selfishness, particularly with regard to wives (yes, plural) and children. It's a fascinating read from the standpoint of the evolution of the natural sciences, the history of Central Europe in the era leading up to the first world war through the immediate aftermath of the second, and family dynamics in a very unusual family. And it's a page-turner.
Posted by Andrea at 1:20 PM