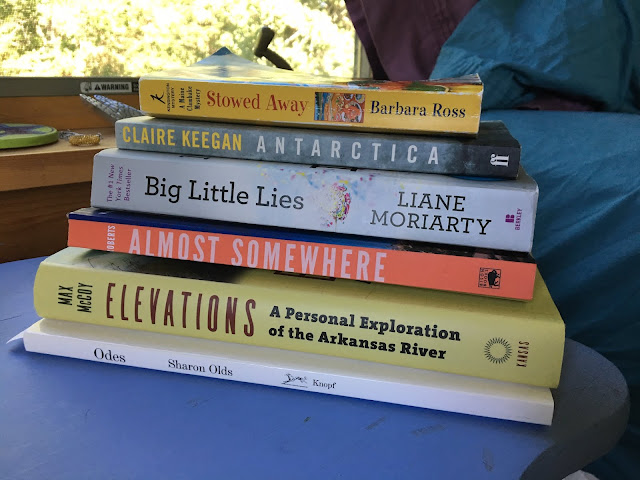 I initially thought my new monthly nightstand posts would be different from my old monthly reads posts—in that I'd envisioned them as a snapshot of what I happen to be reading at a point or two during the month, but as it turns out, I still just end up rounding up all the books I read over the month. But at least my nightstand gets dusted and tidied once a month.

Poetry
I haven't finished this one yet, but I know I'll love it to the end: Odes by Sharon Olds, which I picked up at a reading by the author a little over a year ago. In a refreshing departure from Grecian urns, the very first poem is "Ode to the Clitoris," so that tells you all you need to know—Olds doesn't hold anything back and dives right into writing tributes to all of the important but not-talked about aspects of our lives.

Nonfiction
Still hunting for comps—and inspiration as I revise—for my book, and in that vein read Almost Somewhere, an entertaining tale of a hike along the John Muir Trail in the early nineties, from the perspective of a young woman on the trail with two other women as they learn how to support each other rather than compete over the attention of males. At the other end of the spectrum is Elevations, which, though the subtitle is "A Personal Exploration of the Arkansas River," is much more about the history of the areas the Arkansas flows through (from its beginning in the mining district of Leadville, Colorado to the border between Kansas and Oklahoma) than about the author's personal journey, though that does come in some. I was amazed at how many significant events in history took place in my home state about which I was never taught in school (one of the largest Labor wars in history, Japanses internment camps—which the author rightly calls concentration camps—and the Sand Creek Massacre, which I did learn about eventually, long after completing Colorado history classes in school).

Fiction
I'm way behind the times here, but I picked up Liane Moriarty's Big Little Lies while we were in DC and read the whole thing the day after we returned (I was too tired to do anything else). It is so good, funny, and suspenseful, though I did feel like the ending was tied up in a little bit too neat a bow.

Over the month I also slowly delved into Claire Keegan's short story collection Antarctica. The stories are almost like poetry—gorgeously rich language, dense and full of meaning but also a little inscrutable, leaving me wondering a bit at the end of each one what exactly happened. Is it weird that I wish I could write exactly like both Liane Moriarty and Claire Keegan, even though they're both so incredibly different? It is perhaps why I have not successfully written beyond page 30 of any novel I've started—I want too much to write everything every way at once.

Finally, I read Stowed Away by Maine mystery writer Barbara Ross. I read most of it while on or near the water, which was fitting. It was a fairly entertaining mystery in the classic cozy style, a fun frolic.

What's on your nightstand?
Posted by Andrea at 11:41 AM