When my parents came to visit last month, my mom brought me a two-year-old issue of Knitting Traditions magazine, one with a scarab cowl on the cover, knowing I have a thing for Ancient Egypt and Victorian lady Egyptologists, including one who inspired this pattern. We also visited a lot of yarn stores while they were here, and in each of them I kept my eyes peeled for just the right yarn for this project. I found it in Camden, two skeins of luscious alpaca-wool-silk blend, one in midnight blue, the other chartreuse, one of my favorite color combinations. 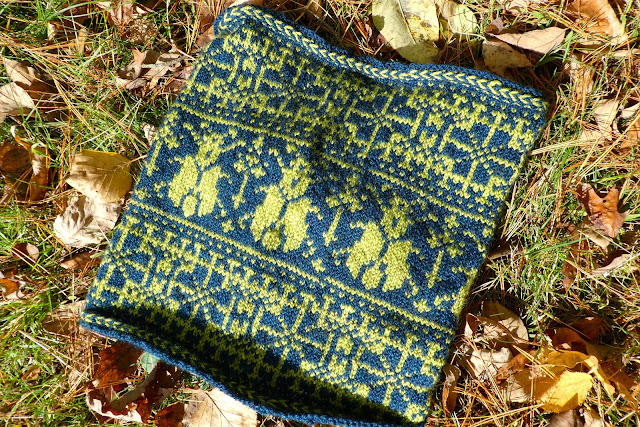 It's been a while since I knitted in two colors, and I was a little worried about the tension, but it came out beautifully. And I forgot how much I love this kind of knitting (is it Fair Isle? Or does that need to have those stripey patterns with the exes?). It came together super fast (and gave me an excuse for extra TV time), and I finished in just over two weeks, a record for me, I'm sure. 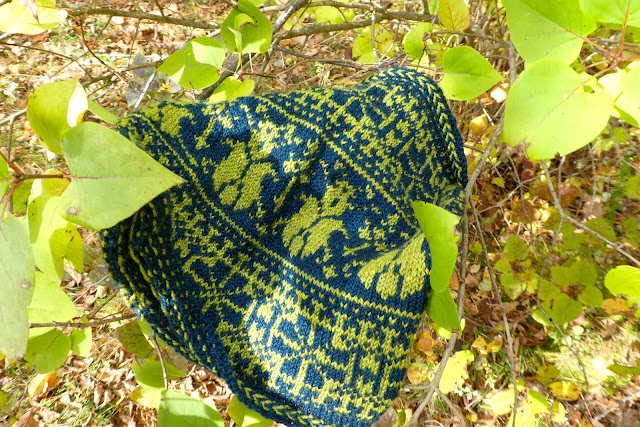 I knitted a little faster than normal toward the end because, as I neared the top of the cowl, my balls of yarn were shrinking at an alarming pace. I was afraid I might need to get more, and since E and Z had a cross-country meet in Camden that Friday, it would be very convenient (other than the fact of having to buy yarn for two inches of pattern) to get it at that time. So I was trying to either finish or run out before the time came. I didn't quite make it, but it was clear that there wouldn't be enough blue. The green was a little iffy, but to be safe I bought a skein of that, too. 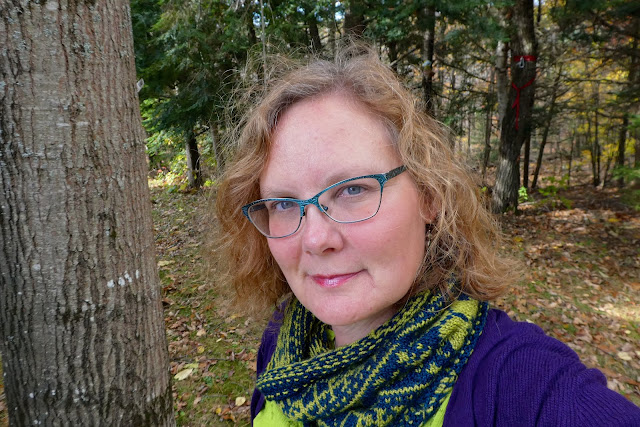 Turns out I didn't need the green after all (just barely making it to the end without running out), but since I have most of a skein of blue yarn anyway, I might as well keep the green and knit something else, since the color is go gorgeous and the yarn so very soft. A pair of fingerless gloves, perhaps?

Pattern notes, such as they are, on my Ravelry page.
Posted by Andrea at 9:05 AM