I try to present an image as a non-competitive mama who doesn't have grand plans or ambitions for her kids, who isn't plotting their entrance into Harvard Medical School, but I do have my dreams. For instance, I envision M as a camp counselor and lifeguard in high school.

My aspirations began when he was very little, only a year old, while trying to find the hiking trails at the Augusta Nature Education Center, before they were well-marked and mapped, and I came across the Augusta Nature Camp, housed in one of the auto shop bays of the vocational school. One of the counselors gave us a map and pointed out the best way to find the trail heads. I determined right then and there to send M to Nature Camp when he was old enough (my resolve was further strengthened upon finding out C was once a Nature Camper).

Likewise, when we visited Old Fort Western when M was three, and I found out they had a summer apprentice program for kids age eight and up, I knew I would send him there also. 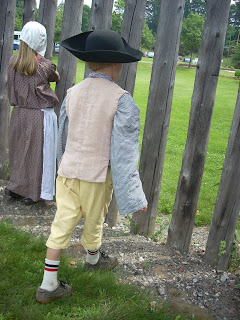 I didn't really ask M his opinion (I'm controlling like that) and I was a little nervous that he would balk at wearing a costume (he rarely plays dress-up and doesn't even like Halloween that much). But he went along quite readily and looked quite rakish in his three-cornered hat. 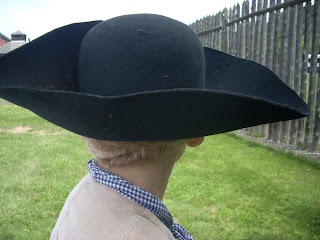 On Friday they held a lemonade party for the parents, and demonstrated a contra dance. 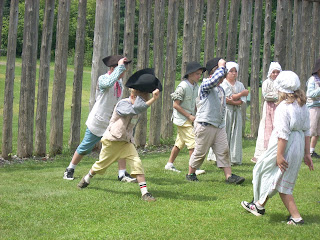 Check out that fancy footwork! 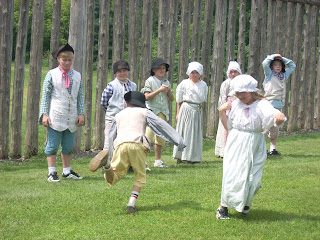 Then the kids gave the guests a tour of the Fort (which is the oldest wooden building in the US, I believe, and a residence that figures prominently in A Midwife's Tale, which I've been laboring through for about two years now).
Here M mans one of the cannons on the boat. 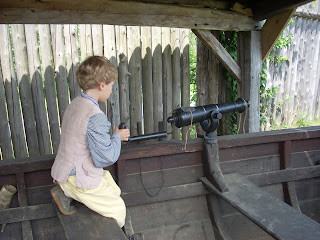 Aside from the pesticide incident, a success! He even wants to go back next year.
Posted by Andrea at 7:05 AM