We managed to (mostly) maintain our local-foods diet over our weekend camping trip. As it turned out, the food was practically the best part of the trip. 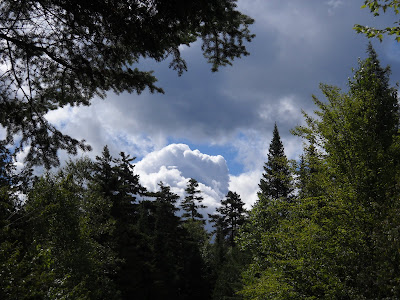 The campground we stayed in, though having been tauted as spectacular by many people, was just kind of meh. Granted, having grown up camping in Colorado, where you can't throw a rock without hitting spectacular, I'm kinda biased (in retrospect, maybe no one ever used the actual word "spectacular," but the way in which they described it I expected spectacular). 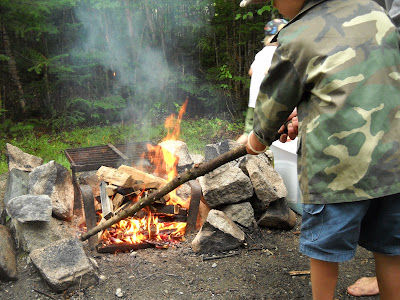 Our campsite was hemmed in on three sides by dense trees and brush (and on the fourth by the road), so there was nowhere for the kiddos to wander, resulting in a similar effect to them being trapped in our living room for too long--bickering and fighting over important things like lawn chairs, sticks of wood, etc. 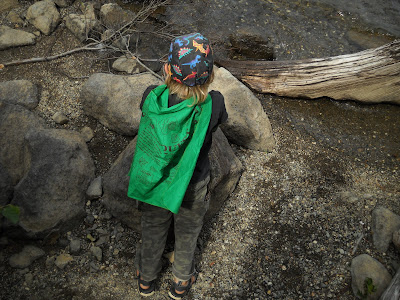 We got them out as much as possible--walking around the camp road, playing boccie ball in "mossland" and we went on one big hike to the other end of the state park--the end with the beach. The trail was lovely, along the lake shore, through tall trees. Along the way we played "Tree Quest" (E wore the Fundana as a cape). 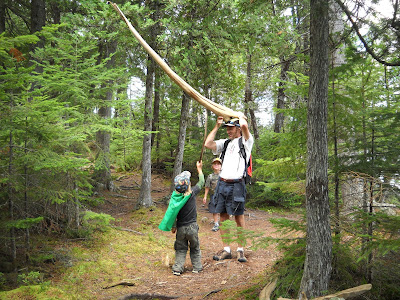 By the time we got to the beach, however, everyone was worn out and it was too cold and windy for the water to hold much appeal (we found lots of cool tree roots and big hunks of birch bark along the way, however). 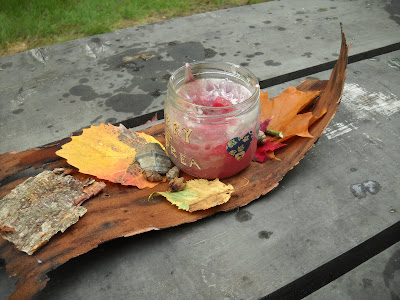 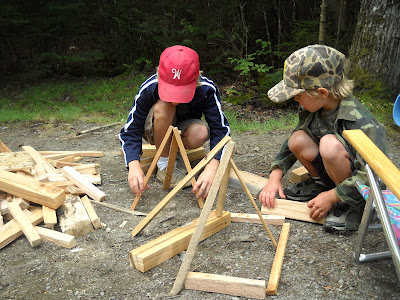 I intentionally did not bring any toys along--Z packed his own accoutrements--broken headphones, walkie-talkie with no batteries, a deck of cards describing the edible plants of South-East Asia, a heavy webbing and brass Army belt, and other essentials--in his raccoon bag, and C took along boccie ball and a Frisbee. Otherwise, they were left to their own devices (accounting, perhaps, for some of that bickering). They put our modest supply of firewood to good use--E and Z built cabins and M spent at least a good hour building Rube Goldberg devices with the wood, a lawn chair, pebbles and his shoe.
Now, onto the food! Our menu: 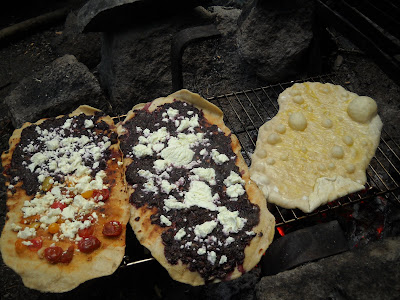 Friday night: Grilled Pizza (dough from an old Martha Stewart magazine--do not try this with no-knead refrigerator dough; it will ooze through the grates and into the fire--and flour, yeast and salt from our pantry) with: a) red sauce (tomatoes from a partially filled bottle of puree in the fridge) and chevre (from a local farm); b) cherry tomatoes (from the farmer's market), garlic and oregano (from our garden) with feta (local farm); and c) blueberry pesto (blueberries from local farm, basil and garlic from our garden, peccarino romano from the fridge and sunflower seeds from the pantry) with chevre. Yum. 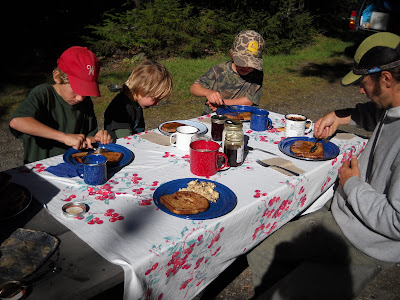 Saturday morning: French toast (bread from local bakery--bought already sliced, which is a rare treat! local farm eggs and milk), sausage from the farmer's market and our own syrup and blackberry jam.

Saturday night: Hot dogs for the boys (from the farmer's market, served with leftover from breakfast bread) and grilled eggplant and peppers with leftover feta cheese and flatbread for the Mama (farmer's market). Maine mustard.
Sunday breakfast: Pancakes (Maine-grown oats, flour, baking powder, cinnamon, from the pantry, local farm eggs and milk) with more syrup and jam. Oh, yes, butter is also Maine-made.
Lunches: Local bread, salami and hummus from the farmer's market, Maine-made cheeses from the regular grocery store.
Snacks: Granola bars from this recipe (using local cranberries instead of cherries and sunflower seeds instead of almonds--I bought a lot of sunflower seeds last winter--next time I would add some cinnamon or vanilla for flavor and maybe an egg to help hold it together better, and double the recipe); cucumbers and green beans from the garden, little purple carrots from the farmer's market, and lots of blueberries and blackberries. 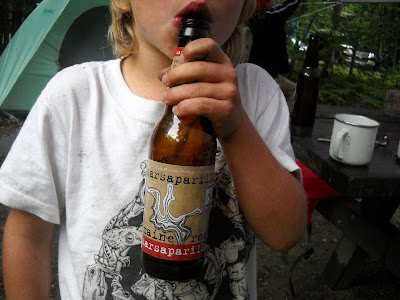 Special treats: Maine Root root beer and sarsaparilla, vegan marshmallows that a friend of mine gave us (and which made three small boys very, very happy--although I sometimes pretend I don't know there's gelatin in marshmallows and eat them when offered, I never, ever buy them). And one big cheat--when I stopped at the store to get ice and a pastry brush on the way (yes, we're most refined campers and require a pastry brush for our pizza), C said the other "c" word and I very generously bought two Green & Black chocolate bars (so very NOT local, but so very good...oh, yes, and I took a little vacation from the not eating sugar thing).
I would say that this was a very satisfying way to eat while camping--although it involved a lot of extra preparation (and a very late night Thursday), it somehow took up less space (no big bags of chips or boxes of crackers and cookies) and this little ice bag is all the trash we ended up with: 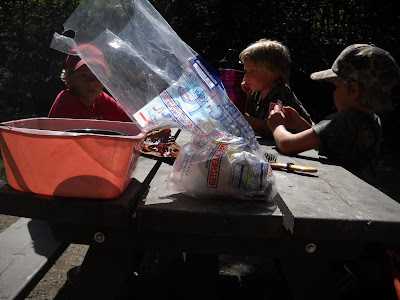 Admittedly, we did use paper napkins--a stash of them that I've saved from when you get too many in a restaurant--and burned them, along with the parchment paper from the pizzas. I'm going to be hunting the thrift/antique stores for cloth ones. We also had some returnable bottles, recyclable jars and lids, a bit of paper for recycling, and two yogurt tubs of compost. 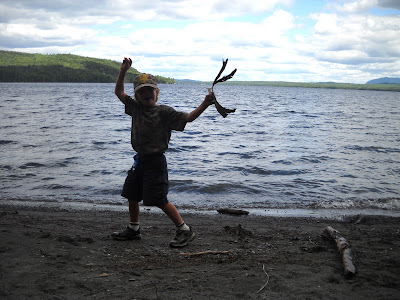 After checking of our campsite, we returned to the beach for lunch and saw this amazing teardrop trailer: 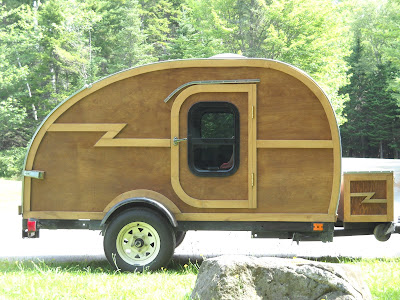 I've been encouraging C to build me one for years. Look how neat and tidy everything is inside, 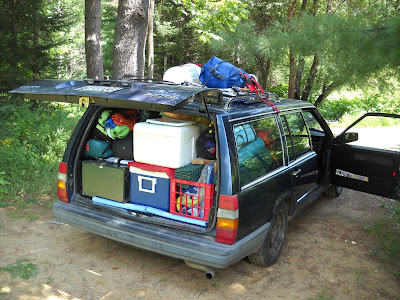