One part of the house that has been a constant locale of disarray is this kids' art corner: 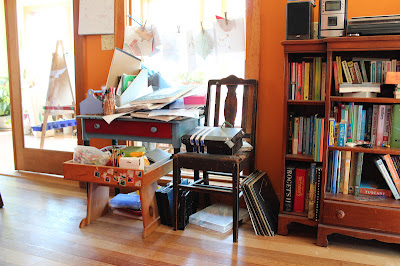 It's located right where the living room and dining area meet and it seems to have an extra dose of entropy. It's a spot I skipped over when I did my kitchen re-org last fall, but I have made at least two efforts in the past to reign in the terror here and here (the first post doesn't even include the before before picture, when this area was really, really bad).

I was looking on Craigslist last week for a hutch (similar to the big turquoise one I have in my kitchen) to put down in the basement to organize all of our arts and crafts supplies. I found one I liked in a nearby town, but I also found this one in Portland: 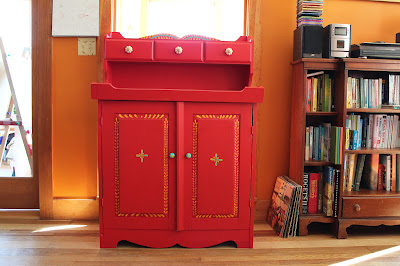 I happened to be going to Portland the next day, so I responded to the ad on a whim and went to pick it up with the help of a friend I'd met for lunch (the woman I bought it from helped me wrestle it down three flights of stairs from her walk-up apartment). 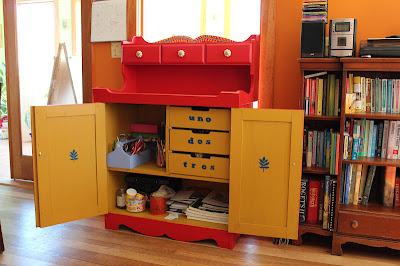 I was afraid it might be too bulky for this spot, but it isn't too bad. It doesn't alleviate our already-existing problem of having a piece of furniture in front of every square inch of wall space (at least it's not soup cans or stacks of newspapers--yet). 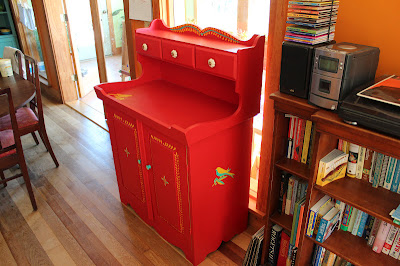 The Mexican flair that the previous owner gave it fits perfectly with our kitchen look (and I've lived with orange walls long enough that I've long since gotten over any aversion to the combination of orange and red). 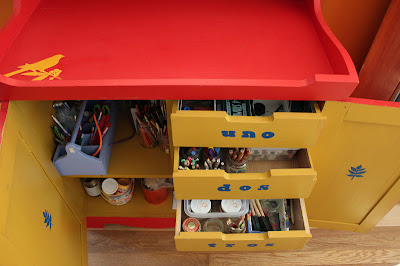 All the boys' art supplies are neatly stored away inside (stickers and stamps in uno, markers and crayons in dos, paints and paintbrushes in tres, pencils and colored pencils on the top shelf, sketch books and play dough on the bottom). C and M immediately began thinking of ways they could use the top surface, but I declared it a clutter-free zone. We'll see how long that lasts.

I even almost convinced C to take the boys to pick up the other hutch for the basement on Sunday, but it had already been sold by then.