What is this Colorado Trail Anyway?

The idea for the Colorado Trail and I were born in the same year--1973. It took until 1987 to complete the original 468 miles of trail. I first heard of the trail in 1995, after I graduated college and returned to Colorado to serve in the AmeriCorps for a year. I picked up a guidebook at the bookstore and sent a letter to my long-distance boyfriend: Want to hike this trail with me next summer? 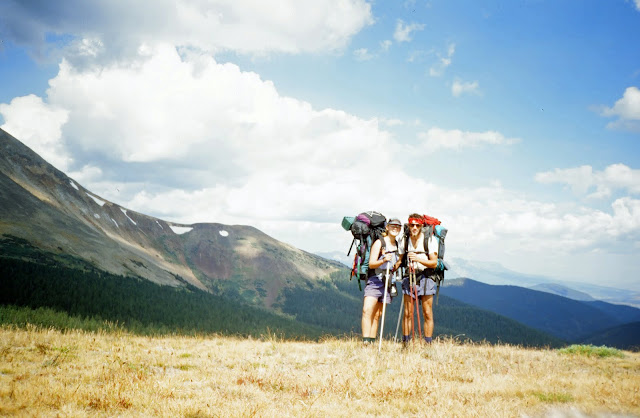 The Colorado Trail, or CT, travels in a sort of S-shape from Denver to Durango. Today it stretches 486 miles (hey, I've grown, too), with a bonus 80 mile along the Collegiate West Loop. You can see more about the trail at the Colorado Trail Foundation.

Here are some of the Frequently Asked Questions I've been getting:

Are you crazy?
Yes. Yes, I am. Just kidding. Unbelievably, no one has asked me this question yet. Almost everyone has been incredibly supportive and excited for us.

What's the elevation of the trail?
The starting elevation, at the Denver end, is 5,500 feet and the high point is 13,271 feet. The trail averages around 10,000 feet, with some time both above and below tree line.

Aren't Western trails a lot easier than Eastern trails?
I wish. I guess what people mean by this is that, unlike the AT and similar trails that like to go straight up and down mountains, many trails in the West are graded for both people and pack animals, so they have modern conveniences like switchbacks. And there are some of those on the CT--some that weave back and forth so slowly and maddeningly you wish you could just bound straight up (or down) the mountain. The trail also follows old mining roads built by folks who couldn't be bothered with switchbacks, scrambles over boulder fields, talus, and scree, saunters along paved or dirt roads.

What will you do about food?
I've been shopping and ordering and amassing all kinds of instant delights, which I'll be packing into boxes which my parents will either mail or deliver to us at intervals of approximately six days, give or take depending on where towns are in relation to the trail. When we get a box mailed, we'll either walk into town, take a shuttle (a luxury that didn't exist 20 years ago), or send someone to hitch-hike.

Are the kids excited?
Er...um. We're working on that. I'll say they're cautiously anxious. E's looking forward to the reduced hygiene situation. Z has asked for a trip to a breakfast buffet at the end. M asked me to never make him do anything again. They'll be fine once they get there. Really.
Posted by Andrea at 4:58 PM