This wasn't a very making-ey Christmas, compared with years' past, however I did send out a few handmade gifts into the world.

E and Z received their quilts, which weren't exactly a surprise, since they've seen me working on them for three years. I managed to sew the binding on Z's before Christmas (like on the 23rd), so it was bed-ready, but E's was still just a top (we dropped it off at the quilter the next week) and tossed aside in favor of more interesting, or at least finished, gifts. 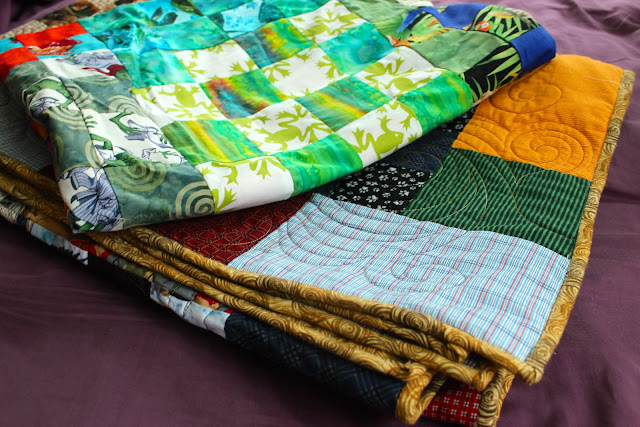 Everyone received hot pepper jelly—either jalapeño or habanero—from our garden's excess of peppers this past summer. I used recipes that don't call for extraneous ingredients like carrots or bell peppers, and I think that's the way to go, and I omitted the food coloring because ew. It's most delicious on crackers or bagels with cream cheese and I'm a devoted fan, especially of the habanero. 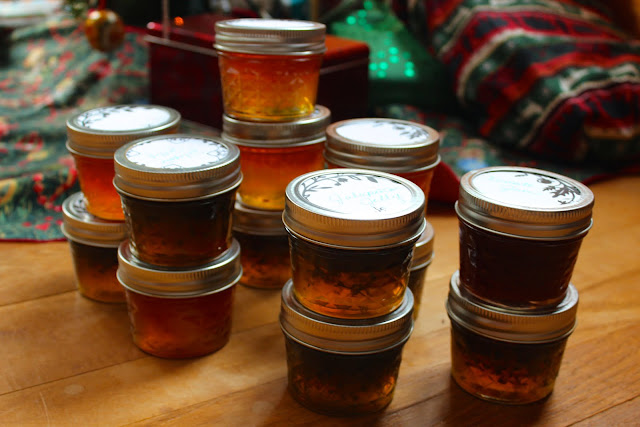 I also made ornaments for an assortment of relatives back home. 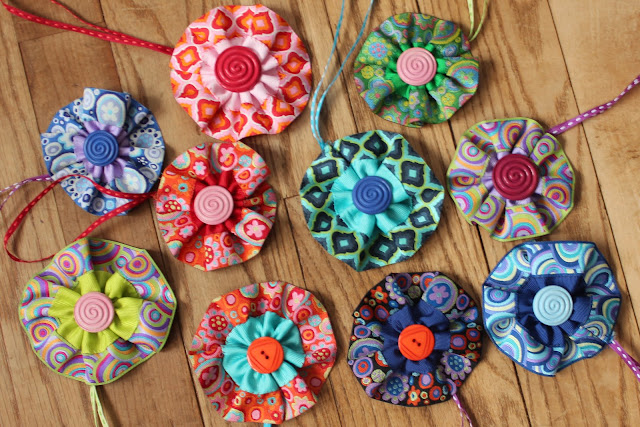 I used Kaffe Fasset jacquard ribbon from Renaissance Ribbons to create yo-yos from this book and sewed on a loop for hanging. 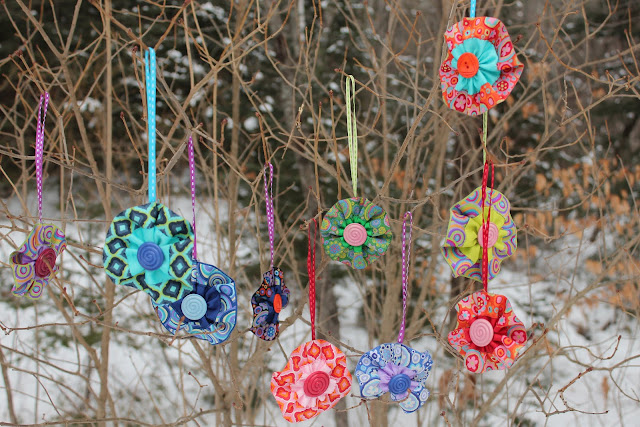 I think they're pretty cute, although they're a one-sided ornament with a scraggly-looking back. Sadly that half of them got lost in the mail on their way to Colorado. 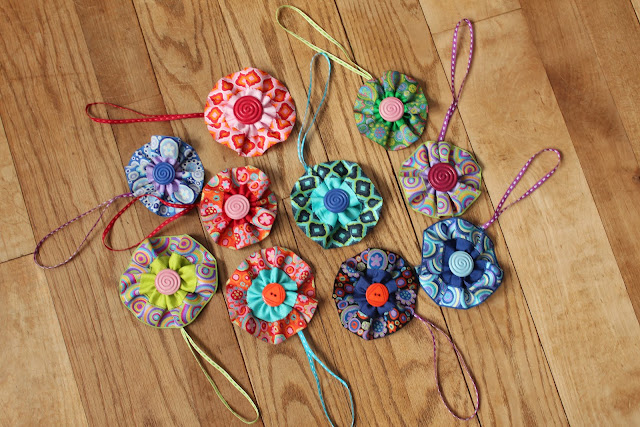 One of my kids asked for a fluffy mauve bathrobe, bath bombs, rose-flavored chocolate…and a Nerf gun. 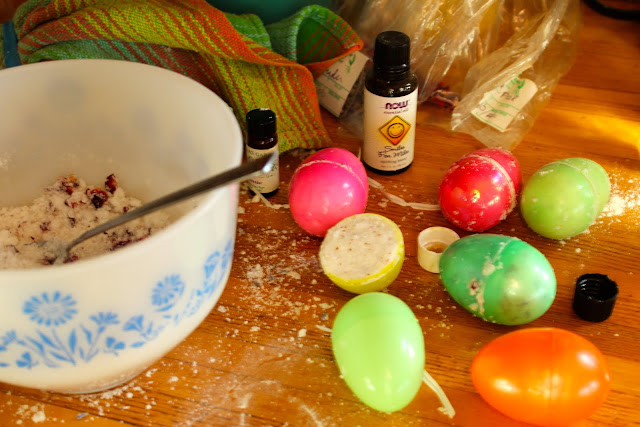 I found the bathrobe at our local department store, but I searched high and low for bath bombs that don't contain artificial fragrances to no avail, so I made my own, using this recipe, omitting the coloring and adding instead dried rose petals, lavender flowers, and lemon peel. For molds, I used Easter eggs, which I thought was pretty ingenious, although the bombs were not quite fool-proof after all. Several broke in half or crumbled on their way out of the mold and I had to remix them using more coconut oil. When I finished making them, I was tempted to test one of the broken ones, but I had to go out in search of rose-flavored chocolate instead (I did later try one and it was quite nice). 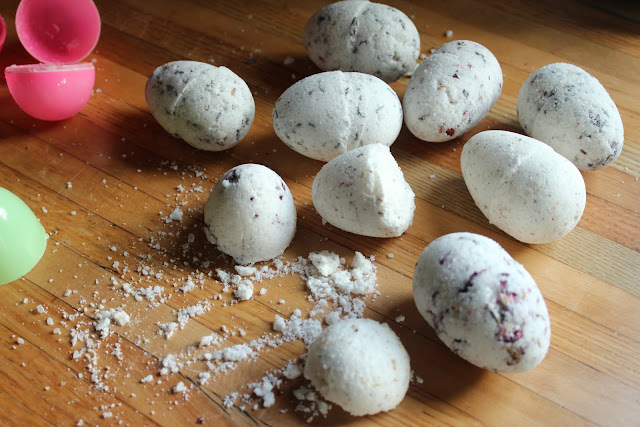 The next gift shouldn't even count, since I made it for last Christmas for family who we didn't get a chance to see before they headed south for the winter and somehow failed to catch up with all summer. Luckily it was a present that would keep. 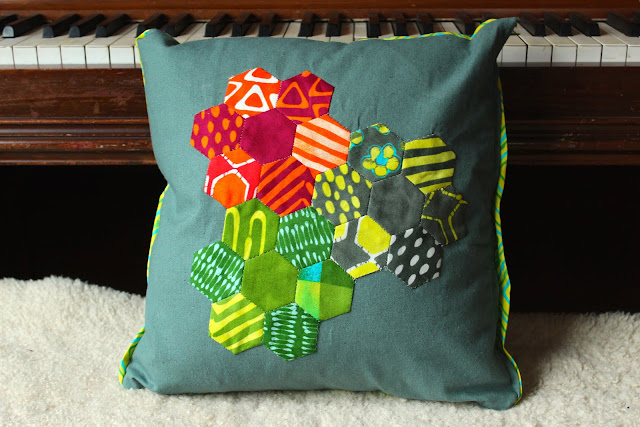 The little hexagons are formed and put together using the English paper piecing method, using a started kit I bought at my local fabric store and then appliquéd onto a gray-blue linen background and zipped up in a pillow. I had intentions of making more paper-pieced pillows for this Christmas, but that didn't happen. Maybe next year... 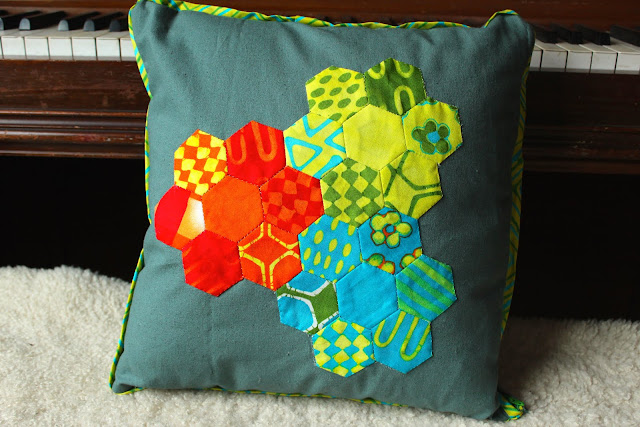 In the received department, the boys got their traditional Grammie Jammies, this year with robes included. 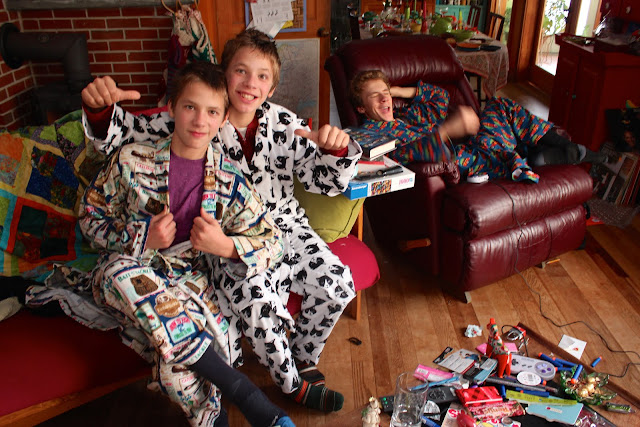