May's nearly over and here I am finally posting April's book list. My excuse? Nose to the grindstone, finishing The Book plus birdwatching. Lots of birdwatching. It's been incredible this month. But before that, in April, when it was still pretty much winter, I read plenty of books. 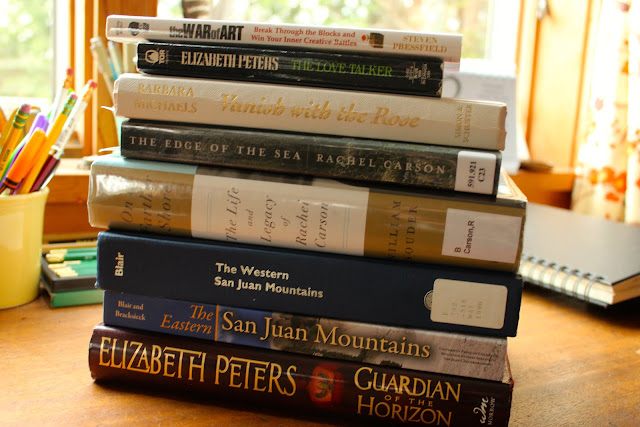 Craft/Inspiration
My inspiration book for the month was The War of Art by Steven Pressfield. This book came as a pair with The Obstacle is the Way from my bother-not-quite-in-law for Christmas the previous year and is another book I might not have come across on my own, but I'm so glad he gave it to me. It's all about how we create our own resistance that blocks our creative endeavors and how to overcome that resistance, told in pithy 1-2 page anecdotes/tips. It's SO TRUE and something I should probably read monthly as a reminder to stop creating my own damn obstacles.

Nonfiction
April was heavy on the nonfiction, and it was all read in support of work. The Western San Juan Mountains and The Eastern San Juan Mountains I read for research/background for my book. And if you knew that we traveled the trail from northeast to southwest and that the San Juans are in the southwest corner of the state, then you might conclude that I'm getting near the end of writing and you would be right! In fact, I wrapped up research and drafting and am now revising and cutting, because the manuscript is probably around 30,000 words longer than it ought to be. So that's exciting. But these books are exciting, too, especially if you live in the area or plan to travel to the area and have any interest in geology (they also cover ecology, anthropology, and history, but the geology I think is both the hardest to grasp and the most interesting, as well as essential to see on the ground). I wish I could go and see all of the landmarks identified in the book and connect them to their story.

I also had a really exciting freelance assignment, writing about places in Maine connected to, named in honor of, or inspired by Rachel Carson. In addition to traveling to several of the places, I read Carson's third book, The Edge of the Sea and the biography On a Farther Shore: The Live and Legacy of Rachel Carson by William Souder. The former is a kind of field guide to the Atlantic shore written in narrative format and I'm excited to go to the beach this summer and really see more than I've noticed before now that I have a more complex understanding of who makes their home in the intertidal zone (and how that zone is really three or more zones). The latter was a really interesting story of Carson within the context of what was going on in the world at the time—namely the cold war and nuclear testing and how the public's experience with the invisible hazards of nuclear fallout led to a receptiveness to Carson's arguments about the invisible hazards of pesticides in Silent Spring (and dear lord, how is anyone who was around for that era even still alive let alone free of cancer?).

It was such a fun article to write and I'm excited to share it with you when it comes out. Plus, I got paid to hike, read, and write. Which is pretty much my life's goal. Now if I can figure out how to get paid more and more regularly, then I'll be living the dream.

Fiction
I was determined not to read anything for fun last month, because I had so much I had to read on a short deadline, but to get to a couple of the hiking trails I had to go by a couple of used book stores and I just happened to come home with a couple more Barbara Michaels/Elizabeth Peters novels—Vanish with the Rose and The Love Talker—and I kinda accidentally read them. And I won't apologize, because, as always, they were such fun reads. Maybe after I finish all 70 or so MPM (that stands for Mertz—her real last name—Peters Michaels) I'll be tired of them, but not yet.

Read Aloud
Speaking of MPM, the boys and I are still tearing through Elizabeth Peters's Amelia Peabody Series, and still loving them. Most evenings I spend an hour reading to them and E is known to ask "can you read?" at regular intervals the rest of the day. In Guardian of the Horizon, the Emersons return to Sudan and the Lost Oasis in a Rider Haggard-style adventure. So fun.
Posted by Andrea at 12:35 PM