Once again another month has nearly gone by and I'm just now posting the previous month's reading list. At least this time I have the excuse of having had other things to blog about. 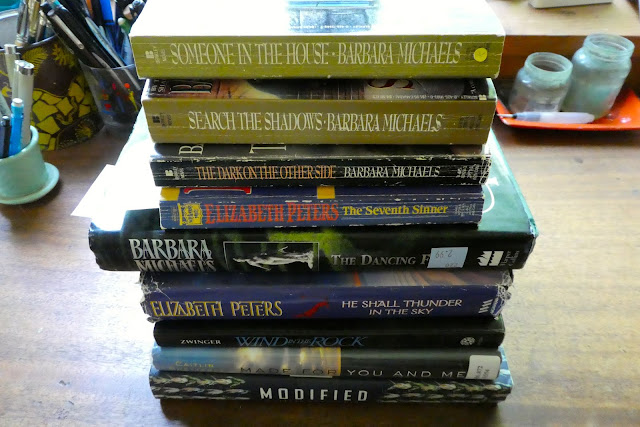 Nonfiction
Last month's nonfiction selections included two books by Caitlin Shetterly: Modified and Made for you and Me. I plan to write a profile of Shetterly for Literary Mama in the near future, so I won't write too much about them here. I went to a reading of Modified last spring and it took me more than a year to pick it up and read it, because I was scared of learning more about a dread subject (genetically modified food) than I already know. Shetterly handles this difficult subject with open-mindedness, grace, and humor. Of course that doesn't make  what we're doing to our food systems any less terrifying. The other book is a memoir about the year she and her husband moved from Maine to California to make a go as freelance writer and photographer and were hit by pregnancy (with violent symptoms) and the recession, along with a lot of other sometimes hilarious, sometimes sad, often scary and weird events. It's funny, while I was reading I was thinking, "Recession? When was that?" Not because we're so wealthy we don't notice the financial ups and downs that affect the little people, but because where we live is so perennially depressed that blips in the worldwide economy hardly make a difference.

My other nonfiction book for June was Wind in Rock by Ann Zwinger. I've had it on my shelf for a very, very long time, but finally got around to reading it because it's on the list for my Naturalists' Book Club for our next meeting. I really love Zwinger's writing and the more I read the more I love. It can be a little slow, and there's little drama, but her quiet observations of the natural world (and occasional dips into the author's personal world), with an artist's eye, are soothing and insightful and lovely. This one is about five canyons that feed into the San Juan River, on the Colorado Plateau, one of my favorite places. The book gave me a little imaginary vacation there (and inspiration to go and travel more).

Fiction
Okay, I admit it. I'm obsessed—with hunting down and reading Barbara Michaels/Elizabeth Peters books. I've been to something like seventeen used bookstores and library book sales in more than a dozen towns around Maine. It's kind of fun to keep an eye out for little hole-in-the-wall bookstores when I'm traveling around for other purposes, and it's nice to have a mission when in these places, because they can be kind of overwhelming (and it stops me buying large stacks of books I don't need). Last month I read numerous finds: The Seventh Sinner by Elizabeth Peters and Someone in the House, Search the Shadows, The Dark on the Other Side, and The Dancing Floor, all by Barbara Michaels. (Of course you know by now that Peters and Michaels are the same person. As Barbara Mertz wrote in her bio: "The ostensible reason for using pseudonyms is that readers need to distinguish the various types of books written by a single author; Mertz writes nonfiction on archaeology, Michaels writes thrillers, many with a supernatural element, and Peters focuses on mystery suspense. I find the various names a horrible nuisance, but apparently readers do see a difference between the productions of these personae.")

Search the Shadows was the first book by MPM (that's Mertz/Peters/Michaels) that I read back in high school. It inspired in me a short-lived aspiration to become an Egyptologist (if only I'd stuck to that plan! I could spend winters in the sunny--and salubrious, as Amelia Peabody would say--climes of Egypt rather than cold, dark Maine). I remember being even then somewhat disturbed by the father-figure romance (this is an element that appears in several MPM books: a surly, older man—in this case, a friend of her long-dead mother and candidate for possible father—turns out to be hero and romantic interest; weird but who knows what goes through the heads of writers).

Read-Aloud
And you'll be glad to know that my two younger children share my obsession and we're still plowing through the Amelia Peabody series, having read He Shall Thunder in the Sky (in which the Master Criminal's true identity is revealed at long last) last month. We're nearing the end of the series and the boys have already decided that I'll read the first book (which I skipped over when we started the series) when we've finished. I have a feeling they'll try to trick me into reading them *all* again after that.
Posted by Andrea at 7:33 AM