After M moved to his own bedroom last November, and after he finally finished clearing all of his junk out of it much, much later, we started prepping what was now E and Z's room for a slight remodel (this room has undergone a number reorganizations as the needs of three boys have evolved and changed: bunk beds, overhaul part I and part II, loft bed). But after 16 years and three boys, the room needed a lot more than reorganization this time around; it needed a total facelift.

The first order of business was to fill about 18 trillion pushpin holes on the walls and ceiling (yes, ceiling) with joint compound, and paint said ceiling with two coats of white to cover a film of dirty finger and footprints (the downside of bunk beds). Then we got started with the walls.

At first Z wanted purple and E wanted hot pink. Hot pink doesn't exactly work with my color scheme, and I figure at least one compensation for having all boy children is that I've never had to live with a pink room in my house. Then E switched to purple and Z decided he wanted red. Or black. So we went with purple. (When I told a friend whose kids were little in the 90s, she said, "You mean like Barney?"  Since he'd gone extinct by the time my kids were preschool age, hadn't even thought of Barney, but now I gotta admit, yeah, it's pretty close to the color of Barney.) 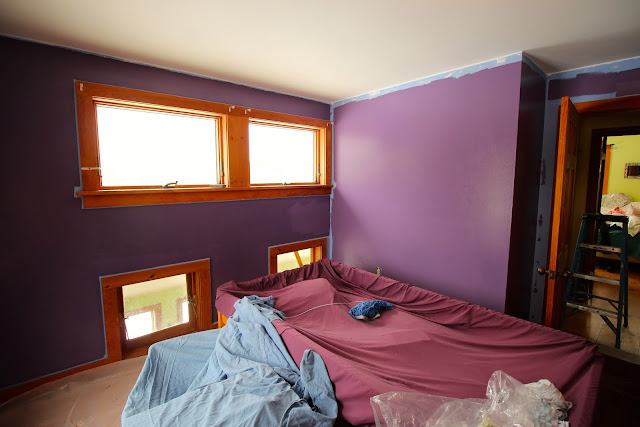 The whole process took several weeks, requiring, as it did, for C and I to both have the time and the enthusiasm at the same time on the weekends, so E and Z have been living with their room dismantled for a while. Sunday afternoon, after the paint dried, I washed the floors and all the woodwork, cleaned the construction (and preconstruction) dust off all the furniture, made up the beds with new sheets and clean bedding, and put the furniture into place. Then at midnight my internal Mom alarm went off—Z had come down with a sudden stomach virus and didn't have time to get down from his loft bed. He had the foresight to keep his bedding clean by leaning over the rail, sea-sick-syle, and I spent the middle of the night rewashing the floor and all of the furniture and the woodwork and the newly painted wall (fortunately, the room was not its usual state of chaos, and E's basket of clean laundry was just outside the splash radius, and all of the dresser drawers were closed). I've reconsidered my brief thought of getting a rug for between the beds. 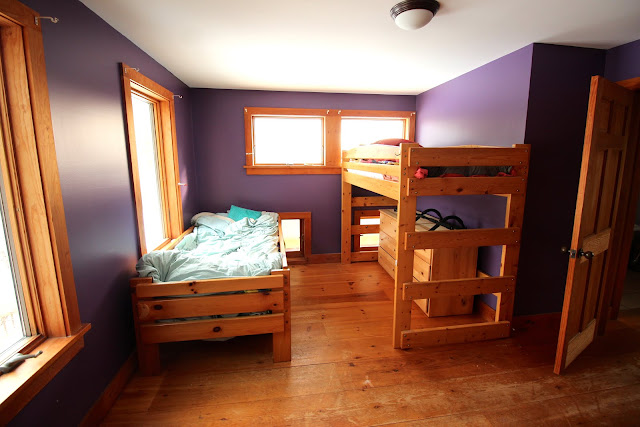 We still need to get desks and window treatments, clean out the closet, which is stuffed with outgrown toys and books and all of the things that had taken up space in the room before we started on the walls, and decorate (though I'm in no hurry to hang anything on the wall anytime soon).
Posted by Andrea at 4:04 PM