Knitting as Metaphor for Writing

A surprising number of writers are knitters (as attested by Ann Hood's two anthologies on the subject, Knitting Yarns and Knitting Pearls). Maybe it's because writing is so open-ended it's nice to have a pattern to follow. Or perhaps writers are "busy hands" types, who need to feel productive, even while watching TV. Or it could just be that knitting is a guilt-free form of procrastination because, hey, you're still being creative, right?

I think it's a little of all of these things, but also that knitting is a metaphor for writing. There's the burst of creativity in the planning (and the possibilities) at the beginning, the necessity of making choices that narrow those possibilities to one yarn, one pattern, one character, one plot. Then comes the long stretch of often-tedious stitch-by-stitch, word-by-word work before you come out with a hat or an essay or a story or a sweater or a novel. Then there's the weaving in of the ends, the blocking and shaping, the finishing. 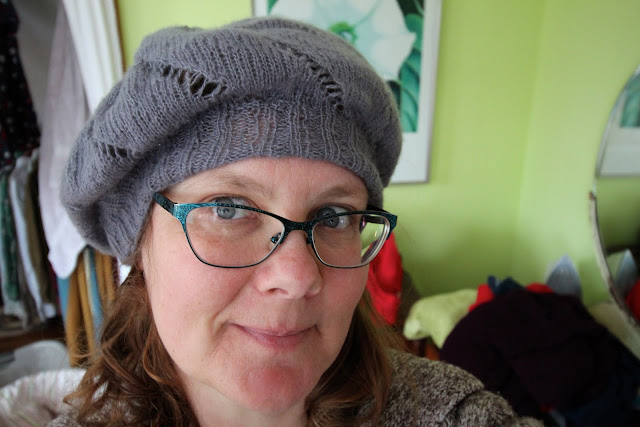 Last winter, I finished this cahsmere hat that had taken me a year to knit because it was lace-weight yarn on size 2 needles, with about a thousand stitches per round. The hat came out too big, even after I ripped out the brim and redid it four times, and it grew even bigger after I wore it around the house for a while. I tried threading a ribbon through the lacy bits, but it looked silly and I was unlikely to ever wear it. But I didn't want to waste that whole year of work and that skein of soft soft yarn. I knew I had to mathematically figure out how many stitches I should end up with and how many decrease rounds I needed to get there, and then rip it out and reknit the brim one last time.

That seemed like a real pain in the neck, so the hat sat in a bag for more than a year, and during that year I didn't knit anything else except for a handful of preemie hats to donate to the hospital. I bought some yummy yarn at the Fiber Frolic last June, and I had a couple of other big knitting projects in mind, but I couldn't get started on anything as long as that cashmere hat lingered in its bag and on my mind. Finally last month, after a trip to the yarn store from which I came home with a bagful of goodies and big plans, I pulled out the hat, did a little measuring and counting and dividing, and ripped out the brim and reknit it one last time. All told, it took only a few hours, and the hat, in the end, finally fits. Right away, I cast on a new project, as if a great blockage had been cleared from the knitting pipeline.

What does this have to do with writing? I've had a similar problem in that department—a lot of ideas and plans swimming around, but an inability to approach them with anything more than a sort of aimless groping. After I finished my hat, I realized I need to finish The Book, which has been hanging out in a kind of limbo, of being done and revised and out on submission to agents, but also needing (I knew deep inside) further revision and a perhaps a different approach to publication.

As soon as I had this realization, I got up early the next morning—and every morning since—and got to work on my revision plan. My goal is to finish by the end of March, at the rate of 10 pages per day, and, as with the hat, my process is to pull out unnecessary stitches and tighten the whole thing up. I hope that, by the end of spring, The Book will move on to a new stage in its life and a great blockage will have been cleared from the writng pipeline, leaving me free to get started on the next book.
Posted by Andrea at 5:30 AM

Email ThisBlogThis!Share to TwitterShare to FacebookShare to Pinterest
Labels: knitting, the book, writing