A Hat for E

I made this hat for E over the weekend: 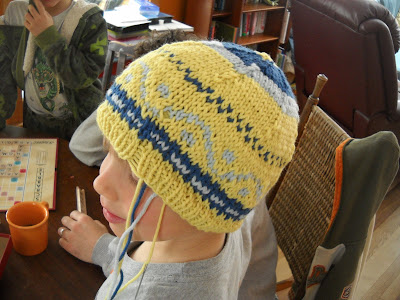 Now we'll get back to that oh-so-casual statement about how fast it went in a minute, but first I'll tell you why I made it.  E has been wearing this hat for the last two or three winters: 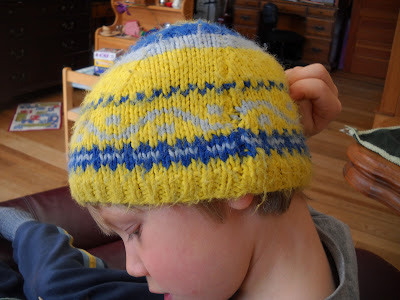 My mom made it for me (luckily I've never been a pinky-pink girl, so the boys have been able to wear several of my handknits, in shades of red, blue and yellow) when I was little.  E's head is starting to get a little big for it, so he wanted to make me a new one, the exact same as the old one.  I bought the yarn for it during my yarnathon last month.  The original is acrylic (which probably explains why it has lasted all these years without shrinking or felting or anything), but I wanted to use the same kind of wool I used for my sweater, in worsted weight (Quince & Co Lark) , because it was so soft and squishy and lovely to work with.
I spent some time laying the design out on graph paper and translating that to a pattern and it took some brain-bending to figure out the gauge I needed to make a slightly-larger hat.  I cast on and knitted several rounds and then ripped out no fewer than three times Thursday and Friday night (probably best to not start a complicated project after 8 pm after partaking of a glass or two of wine and while chatting at knitting group!), but by the time I went to bed Friday night, I had the right number of stitches cast on the right size needles and was ready to really go Saturday morning.
E worked on his knitting while I worked on mine, 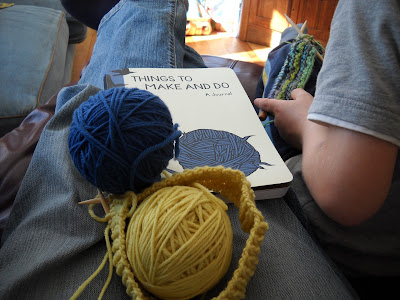 And helped me roll the yearn into balls: 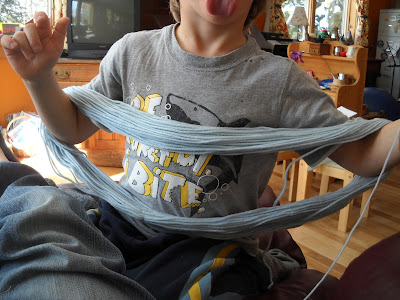 I often put off projects because I'm afraid they'll be hard, or take too long.  This one was no exception.  I have only attempted knitting in pattern once before (the very second thing I ever tried knitting--a hat for C), and I had pulled the yarn too tightly behind, so that the hat had no stretch and was too tight for him.  I was worried about the same thing happening again, and I was afraid it would take me all the way until next winter to finish E's hat.  But once I plunged in, I felt exhilarated, and picked up my knitting every spare moment. 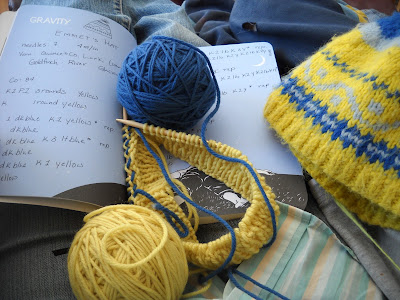 I've been reading some different books and articles about happiness, pleasure, enjoyment and "optimal experience."  I can't articulate much of what I've read, but one theme I've been able to pick up on that growth and continuous improvement are essential to true happiness and enjoyment of life.  While I've had the same boring scarf sitting in a bag for 10 years, awaiting my attention, this project, which challenged and scared me a little (but was not so difficult as to be frustrating), sent a little thrill through my chest whenever I worked on it.  I was using my brain and my hands (yea for learning Continental knitting--I held one strand of yarn in each hand!) in new ways that challenged and excited me...and seeing results as I went along!

I finished up Sunday morning, while drinking my after-breakfast pot of tea.  I was almost a little sad about being done--rather than my usual product-oriented way of being, I was enjoying the process so much, that I missed it when it was over. 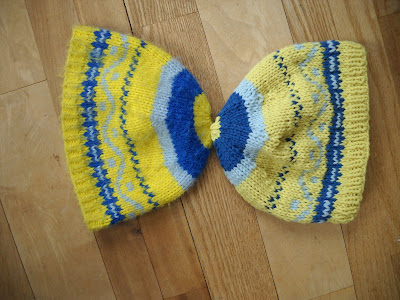 The final hat is narrower, but taller than the original, but with a lot of stretch, so that it fits E well, and should continue to fit through next winter.  There are some mistakes.  Some not-quite-right tension throughout.  But I feel good and E loves it.

(Ravelry notes here)
Posted by Andrea at 8:46 AM