When we first considered going to Colorado for Christmas, I called up my mom and asked if she'd be interested in knitting the boys stockings. They were beginning to outgrow (both in age and volume--I do like to stuff stockings) their old Sesame Street character stockings that my aunt had sent each for his first Christmas, and I'd been drooling over the three stockings in Jan Brett's version of The Night Before Christmas. She said "Sure," I sent the book for inspiration, and I think all three were done within the month. 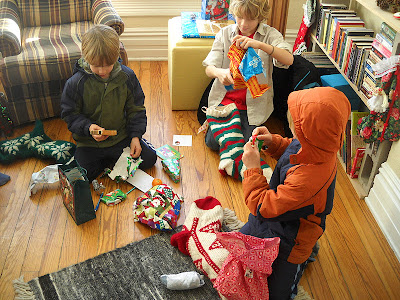 I had made it clear that Santa Claus would come to our house while we were gone, and the presents would be there when we got home. "Then we'll have two Christmases!" I exclaimed each time, emphasis on the "two" (in the end, we had something more like seven Christmases, but who's counting?)

But, on Christmas morning, I got a text from my Sister V saying Santa had stopped by her place and left stockings for the boys. We bustled over and tore into the loot.  We just reread the inspirational book and E and Z were very amazed that their stockings are almost just like those in the book (they did take their time to point out the minute differences. We decided that Mrs. Claus must have knitted them, and that maybe she'd knitted a similar set for Jan Brett, which the artist copied into her book). 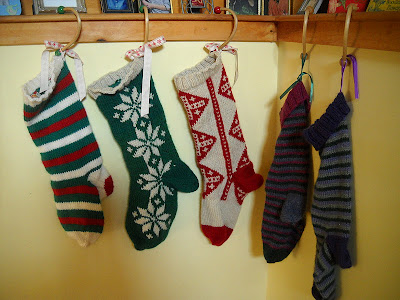 Hanging along side them are the stockings my mom knitted for C and me a few years ago (and they're all hanging from Sock Hooks, which are fantastic--no nails, no holes, no poke-your-eye out hooks--and made in Maine. And if you don't have a handy knitting granny at your disposal, you can get beautiful knit stockings from the same folks).

While Mrs. Claus was busy knitting, GrandSantaPoppy was busy making a fleet of vehicles 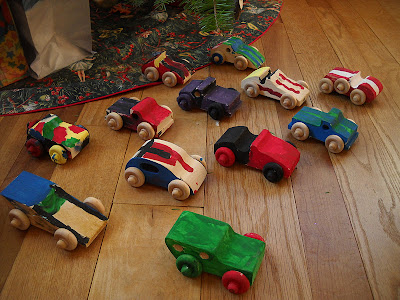 For the boys to paint while we were there. 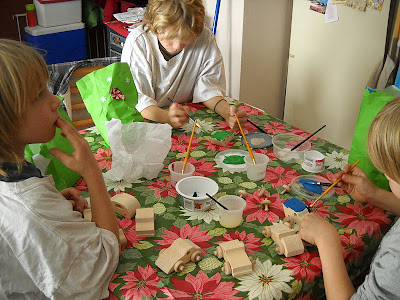 He also made this cool ornament, somehow with some kind of magic saw. 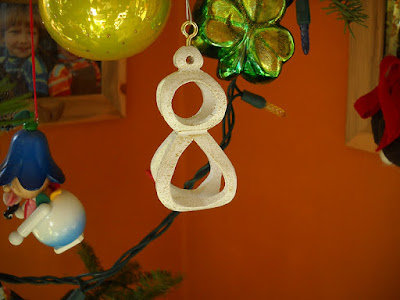 And my aunt made this little flower ornament from pinecone scales, beads, wire and glitter. 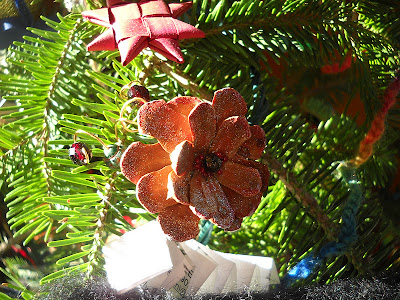