Exciting Things in Nature, Part I

One evening last week, after dropping E and Z off at baseball practice and having an hour or so to myself, I went down to our gravel pit pond--which will be my "delimited study site" for the naturalist class I'm taking--to try to get started mapping it.

As I approached the pond from the driveway that angles down into the gravel pit, I noticed large ripples on the surface of the water, far to big to be caused by frogs or turtles. I trained my binoculars on the pond and saw something brown and largish swimming around. Beaver? I wondered. Muskrat?

Then I saw another one way at the far end of the pond, turning somersaults like a kid in the pool. I could see that it clearly did not have a wide, flat tail, so it definitely wasn't a beaver. As I approached the pond to get a closer look, the two creatures caught sight of me, and instead of disappearing underwater, like a muskrat would, they swam toward me, snuffing their nostrils and making a high, whining sound. They had smooth, sleek heads, almost like a seal, and thick, brushy mustaches. Definitely not muskrats. Otters! 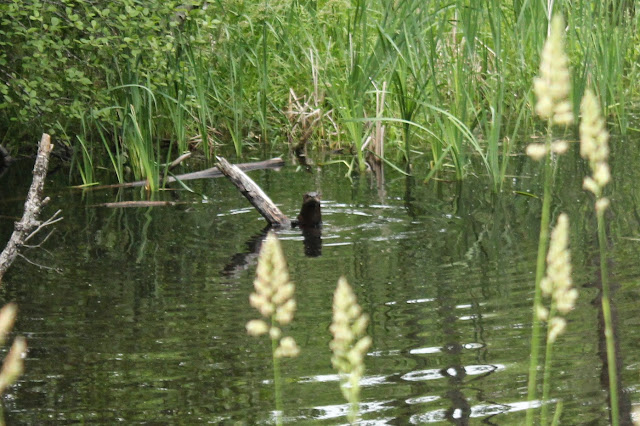 I stayed and watched them for a few minutes, all the while, they never took their eyes off me and continued to snuff. I wondered briefly if they would come out of the water and chase me away, but they didn't. I went back to the house and brought M and C (who of course didn't believe me) down to see them, and of course brought my camera, too. I don't have a telephoto, so I couldn't get that great of pictures, but you can kind of see one here. When E and Z got back from baseball, I brought Z down (E had wandered off on an adventure of his own), with strict instructions to not try and catch them (he's totally convinced that if he could just get his hands on a wild animal, it would curl up in his lap, instantly domesticated), and then we left them alone for the night.

I've been back to the pond several times in the last week, but there has been no further sign of the otters. Maybe we scared them away, or maybe they were just passing through on their way from one branch of our river to the other. I don't think our pond would have much to offer otters long-term, being small and shallow and vulnerable to the vagaries of precipitation. Also, I'm pretty sure there are no fish in it (although there are frogs aplenty...and we're still hearing gray tree frogs at night, so the otters didn't eat all of them up...as for other types of frogs, I'm not so sure).

I keep thinking how fortunate it was that I went down to the pond on that particular evening. Imagine how many wondrous things are going on around us all the time that we don't even notice because we're busy doing other things. I'm so glad I have the excuse of my class to force me out more so that I'll hopefully bear witness to many more exciting things in nature.

Edited: Thanks to Meryl for pointing out that not everyone may have heard of freshwater otters! These are North American River Otters, whose range appears to cover most of the east coast, Canada and the northwest US. I'm adding the link to the Wikipedia page here, and I hope to learn and write more about them in this space in the near future.
Posted by Andrea at 5:30 AM