Being a girl for the West, I love Mexican food. Which makes living in New England--the land of boiled dinner, ham suppah, chipped beef and American Chop Suey--supremely depressing. Did the Puritans think flavor was some kind of sin, or what? C and I have bravely tried out pretty much every Mexican restaurant we have seen, heard of or passed by in Maine. Most of the time we have been supremely disappointed.
There have been a few exceptions. Miguel's, in Bar Harbor, I have heard is good. I had a co-worker who would drive from Brunswick to eat dinner there. When I lived in Bar Harbor, however, I was too poor to eat out most of the time, so I have never tried it, even though I only lived a few houses down the street (why am including it on this list? I don't know.) But from the menu, it appears worth trying.
During our early courtship days, C and I went out to XYZ in Southwest Harbor and I had a really gorgeous chile relleno made with a big, fat purple chile and served with my first-ever taste of jicama (I didn't know what it was, but I knew I liked it). Reviews on Google maps say the service is poor, but I'm sure C and I were so enamored with gazing into each other's eyes, we wouldn't have noticed either poor service or a mariachi band serenade. I don't even know if it is still in business.
When we're in Brunswick, we try to eat at El Camino, run by a chef from San Francisco and decorated in amazing kitsch--with bright orange and red walls, chrome car parts and velvet bullfighter paintings. The menu is smallish, especially for a vegetarian diner, and changes regularly, but the food is always fresh and delicious, with local ingredients. Once during rhubarb season, my friend ordered a rhubarb martini. I usually get the limeade with coconut milk, because I'm wild and crazy like that.
Of course, if you want, as my friend Brett calls it, swamp cheese, there's always Margarita's, which, by the way, I am totally not above. However, for something a bit authentico, and when I'm not in the mood to drive to Mount Desert Island or Brunswick (that would be always), I have resigned myself to attempting to create my own Mexican food. Two summers ago, I made it my mission to perfect homemade corn tortillas, and nearly every Friday set myself to work on a batch, along with a sauce of simmered tomatillos and serranos or tomatoes and jalapenos. We had a bumper crop of tomatillos that year and I was able to freeze several pints of the sauce to help me get through the following winter's cold, dead misery. The crowning glory that summer was a batch of chile rellenos from poblanos coaxed from the New England Soil by my own hands. We joked that it was the meal that took seven months to grow, seven hours to cook, and seven minutes to eat. Mmmmm...
Anyhoo, back to the tortillas, I pretty much never buy them anymore, but make them myself. My recipes for the tortillas and the sauces and pretty much anything else Mexican I attempt to cook, come from Rick Bayless, both his Mexico One Plate at a Time and his Mexican Kitchen. E and Z like to join in the tortilla-making--why not? it's just like play dough--and I think we make an excellent team. 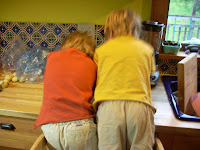 Corn Tortillas for a Gringa in New England Jonesing for Blue Sky, Sunshine and Spicy Food
Mix 1 3/4 cup masa harina* with 1 cup plus 2 tablespoons hot tap water.
Let stand, covered for 1/2 hour
Knead in cool water 1 T at a time until the dough has a putty-like consistency (or as Rick says, get it as wet as you can without it being sticky) and roll into 12-16 walnut-sized balls and cover.
Heat one cast-iron skillet to med-low and heat another to med-high.
Turn stove hood fan on full-blast and possibly open a window.
Get a tortilla press. This may require a trip to the Southwest. Bummer.
Put two squares of plastic to fit over the press's plates (Rick uses garbage bags, I use two halves of a quart-sized ziplock freezer bag--yes I know I recently preached about trying to become plastic-free, but I have several of these bags kicking around that I wash and use over, and over, and over again. I also wash my two squares for tortilla-making and use them again). 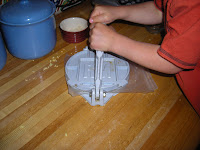 Place a square of plastic on the press, center a ball of dough, cover with the other sheet of plastic and press into a flat circle. 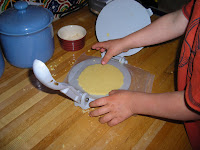 Peel of the top sheet of plastic, lay tortilla-side down on your palm, and peel of the other side. Lower your hand into the med-low skillet and deftly roll your hand out from under your tortilla, leaving the tortilla in the pan and avoiding singeing the hairs on the backs of your knuckles. 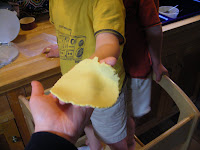 Cook for about 15 seconds, until the tortilla has released itself from the pan.
Flip into the hotter pan and cook about 30-45 seconds, until brown spots appear on the underside. Flip and cook another 30-45 seconds while you prep the next tortilla. Place finished tortillas inside a cozy cloth napkin.
Rick says the perfect tortilla puffs up like a pita bread. Mine do this sometimes (usually toward the end of the cooking session when I get the heat right), but not always. They may not be perfect. They may not be the absolutely best tortillas I've ever had, but they're pretty dang good for a gringa and two little gringitos in New England.

Here they are turning into quesadillas...mmmm... 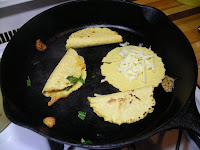 * Masa harina, also called taco flour, is ground corn cooked with lime and dried into a fine yellow flour. If you are lucky enough to have access to fresh masa where you live, skip the first couple of steps. Do not mistake masa harina for cornmeal, which is just ground corn.
*************************
P.S. New post up at Capital Walks.
Posted by Andrea at 8:10 AM