The amazing Kate Hopper, about whom I've written here many times before, tagged me on this writer blog meme. I took two of Kate's "Motherhood and Words" online classes (she helped midwife my first published essay) and met her all-too-briefly in real life at AWP last spring. I've had the pleasure of reading both of her books, including Ready for Air, which I wrote about (accidentally writing about myself a bit too much) here. Kate has been a great mentor and, I hope I can say, friend. Thank you, Kate, for picking me to play along! 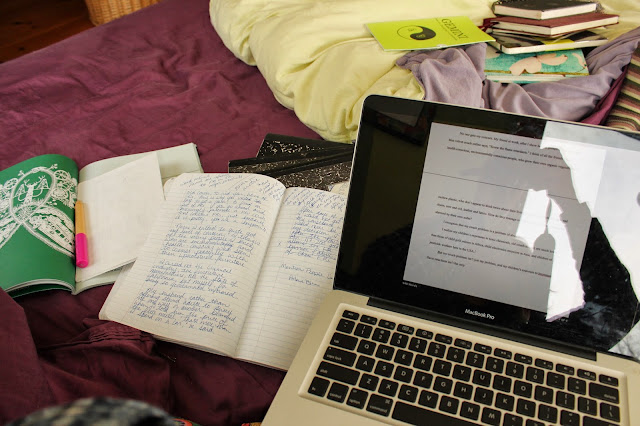 After a two-month funk senescence, I finally got back into a writing groove in the last couple of weeks. I've been going through each of the short stories from my thesis, revising, tightening up, rewriting endings, and getting them ready to send out for publication. I'm also at work on a long essay about a fairly complicated environmental health issue. I'm trying to find a way to write it that is neither journalistic nor regulatory jargon. In addition, I have a bunch of short essay and story ideas rattling around in the back of my head. I'm so happy I've got my writing mojo back so that I can put all those ideas to work.

My writing is different in that I generally incorporate themes of motherhood and nature or the environment into both my fiction and nonfiction. While I know I'm not exclusive in this area, I've found it's not a common approach (though getting more so, which is wonderful). I've also found that the mother-protagonist is a fairly recent development in literature (though also getting more common), and I love being a part of this great new wave of literature. I enjoy experimenting with point-of-view, playing with humor, especially juxtaposed with dark subject matter, and finding the significant in the ordinary.

About the time the twins were born, I got a subscription to Brain, Child Magazine and a friend of mine handed me a few issues of a mama-zine. I had always written and wanted to be a writer, but I had sort of lost track of my passion until then, when, in the intensity of life with two newborns and a really disenchanted four-year-old, the awareness for the first time that there was a literary outlet for what I was going through really lit the spark for me. As I like to say, "I gave birth to my subject." While I started out writing nonfiction, motherhood followed me into the realm of the short story, which I started writing not long after the twins were born, when I took a writing class in which the instructor encouraged us to try our hands at fiction, which was always my first love and secret desire. A year or two later, I had published my first short story, and I focused on short fiction in the MFA program I just completed. I write short stories because I think I lack the attention span to write a whole novel.

I wish I knew! Every time I sit down to write, I feel like I've never done it before. I think it's a bit like putting together a 100- or 1000-piece jigsaw puzzle. I start with an idea, an image, a line, a theme, or a scenario (choosing a puzzle off the shelf). Then I scribble all kinds of notes into my journal, dig through old journals, blog posts, and zines for little snippets and memories to incorporate, or earlier essays that can be made more robust now that time has gone by, and I pay attention to things like weather, conversations, scenery, landscape, to build into the piece (dumping out the puzzle pieces on the table). Then I begin to organize my ideas, often clustering in the manner of Gabrielle Lusser Rico's Writing the Natural Way, typing up bits and pieces, arranging and rearranging them in a pleasing order (putting together the border). I free write, research, turn over and over the plot, the characters, the language when I lie in bed awake at four a.m. or while I swim laps in the early morning or drive to work, set it aside and focus on something totally non-writing-related, come back to it, write, and rewrite and rewrite (fill in the middle). It's a big hot mess, really (as you can see from my "office" in the picture above). I wish I had a more orderly method (or that the muse would just dictate to me a whole, completed piece). I can't stress enough the importance of both letting the work (and the brain) sit and marinate and rewriting. And by rewriting, I literally mean, setting the piece aside and typing it all into the computer again (see why I don't want to write a novel?).

Next up on the My Writing Process blog tour:

Kristen Levithan writes about motherhood, women’s history, and books for print and online publications. Currently at work on a non-fiction book about writers who were also mothers, Kristen lives in New England with her husband and three children. She offers cultural commentary and musings on modern motherhood at her blog, Motherese.


Rachael Levy lives in Seattle with her husband and four children who serve as both inspiration and impediment to her writing. She is a former newspaper reporter who writes regularly at The Slow-Cooked Sentence. Her articles, essays and fiction have appeared in The Christian Science Monitor, Story Bleed, the anthology "Twice the Love: Stories of Inspiration for Parents of Twins and Multiples," and elsewhere.

Karla Fossett is a Maine-based writer, inspired by the beauty and coziness of New England. After earning a film degree from Boston University and spending the first five years out of college pursuing film work, Karla now lives in Portland and is pursuing her love of fiction. She graduated in July 2013 from the Stonecoast MFA in Creative Writing program and currently works as a technical writer and editor for  a national CPA and consulting firm. She is at work on her first novel, a young adult work inspired in part by her time spent as a high school social studies teacher. Her blog can be read at http://willfulmonologue.blogspot.com
Please visit these amazing women's blogs on April 7 to hear about their writing processes.


Emily Swartz is a freelance writer who recently graduated from USM’s Stonecoast MFA program in Creative Writing. Her current project, The Midnight Thief, centers on the real and fictional lives of Appalachian children growing up in Kentucky during the 1940s. Emily lives in Maine but travels down South whenever possible. Emily blogs at www.emilyswartz12.wordpress.com.

Email ThisBlogThis!Share to TwitterShare to FacebookShare to Pinterest
Labels: writing