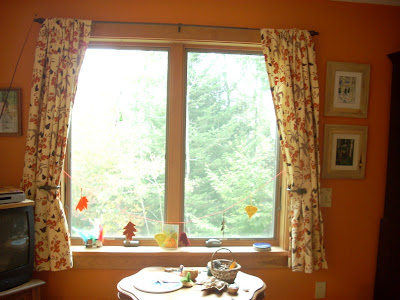 I've been wanting to make new living room curtains for a while, but hadn't quite gotten motivated to carry it off, until I set myself the deadline of the Solar Home Tour this Saturday. Our old curtains were floor-length gauze in a buttery yellow color from Pier 1. I liked them a lot when I bought them (seven years ago), but they are not very effective at either blocking light or keeping in heat, and they had become rather limp with age. Also, the floor length was not very practical--with furniture in front of every one of them, we rarely closed them because it was a hassle. 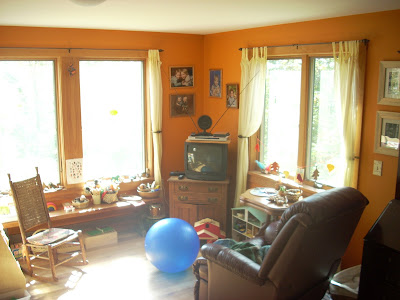 My vision was to use this lovely yellow sparrow fabric from Joel Dewberry, but by the time I got around to ordering it, it had been discontinued and there wasn't a scrap to be found anywhere (I have hopes of finding a full bolt of it at Marden's, but that is unlikely since I never go to Marden's). Instead, I found this fabric, on sale at Sew Mama Sew, also by Joel Dewberry, and much more practical, because it is drapery fabric (while the other was quilting cotton), so it is wider and heavier. The more I sewed it, the more I loved it (though it kept making me think of French vanilla ice cream with swirls of chocolate, chunks of dark chocolate and bits of candied citrus...wouldn't that be a good flavor?) 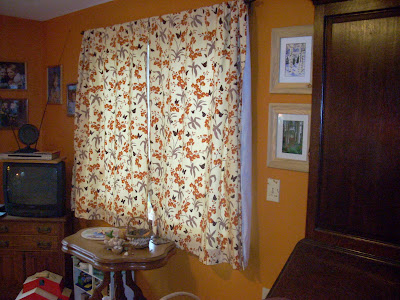 I followed the instructions in this tutorial, which while excellent, has the unfortunate tendency of making it look a lot easier than it is. I neglected to take into account the fact that I don't have enough space to work with this much fabric (I stretched twelve yards of drapery lining from one end of my room, across the hall and through the kids' room--and have a set of grubby four-year-old sized footprints on one panel to prove it--and it still didn't fit); that I am totally incapable of cutting a straight line (while the curtains themselves came out relatively even on the bottom, don't lift their skirts, or you'll find the linings all katywompus); and I apparently cannot measure properly either (I had barely enough fabric, even though I'd ordered 1/2 yard extra). Despite all of these inadequacies, along with poor thread tension I didn't notice until I was nearly done and not making the overlap on the sides big enough, I think they came out perfectly fine. I love the brightness (though it may appear a tad busy to some?). I hope that window-length curtains don't look weird in a living room--I guess floor length is more standard, but like I said, it wasn't working for us. 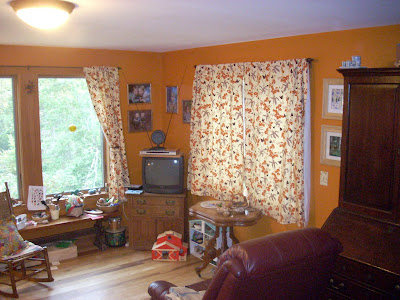 Now I just need a chocolate-brown velvet camel-back sofa to go with it, doncha think (and send that awful red barkalounger to the dump)?
Posted by Andrea at 6:56 AM