Earlier this fall I collected a bunch of autumn leaves and pressed them between the pages of a newspaper, for later use, but hadn't gotten around to doing anything with them yet. And then there we were on Thanksgiving day with nothing to do (I was not required to cook anything--yay--and C. was off plugging one of his tires that had been punctured by a nail, so he could repair his exhaust, so he could go to my office parking lot and attempt to resuscitate my car, which had died on Wednesday, and which I needed to drive to Northampton for the weekend), so I got out the leaves for Thanksgiving crafts, and pretended (to myself) that I had planned it all along.

This craft fest actually involved three smashed gluesticks (f.y.i. gluestick does not wash out), some crayon on the floor and a fair amoung of bickering, not-sharing, yelling and throwing things. Not exactly the dream family creative experience conjured by some crafty bloggers. The twins did enjoy having their hands traced into turkey shapes, and M. put together a lovely book of leaves, followed by another book more aligned with his interests. It's actually fitting, in a way, since the genocide of Native Americans started, what, five minutes after the pumpkin pie was served that first Thanksgiving. 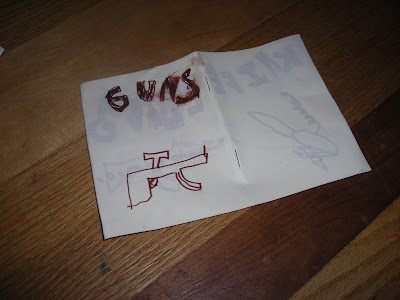 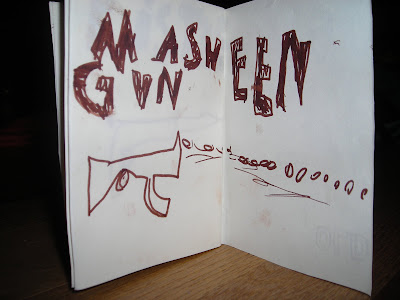 Posted by Andrea at 1:10 PM No comments:

I consider myself to have a fairly broad vocabulary, yet I often find myself grasping for the right word--it often takes between 24 hours and never before I think of the word I'm looking for. Yesterday in an email to a friend I actually said I was "dissed." I don't think I've actaully ever used the word "dis" before in my life. It wasn't until I was driving home later that evening that I realized "slighted" was the word I was looking for.

I also sometimes consider myself sort-of a writer, but I usually can summon words no more descriptive than "wonderful" or "great" or "amazing" when describing something (see, I just used "descriptive" and "describe" in the same sentence because I couldn't think of the right word!!) And all-too-often "cool" and "awesome" rear their ugly high-school heads and leap from my tongue unbidden.

On Monday we had a staff day-style feel-good fest for all of the employees of my government agency. Our guest speaker was a woman from the Governor's office whose second-most used word, right after "um," was "incredible." She is supposed to be (incredibly) smart, but between the poor speaking skills and limited vocabulary, she sounded incredibly not-smart.

I am concerned that I too sound incredibly not-smart because the words...all those lovely words...that I want lie unused at the bottom of the motherhood-addled pit that used to be my brain. Which would just be incredibly, incredibly sad.
Posted by Andrea at 8:42 AM 6 comments:


J's birthday
Originally uploaded by geminimama
It's reassuring (or frightening?) to know that I get a lot from my mom--from taste in paint colors to clutter on the kitchen table.

Just to join in with all the domestic goddesses of the blogosphere, I thought I’d share with you the remains of this morning’s breakfast (it is now 2:21 p.m.):

I have been working on this blog for a few months now (inside my own head), so it may appear that the weather is a lot nicer than it should be at this time of year. Don't be fooled; I'm just posting moments I photographed since July. I realize this is contrary to the concept of blog as a daily journal posting. So be it.
Posted by Andrea at 9:11 AM 1 comment: