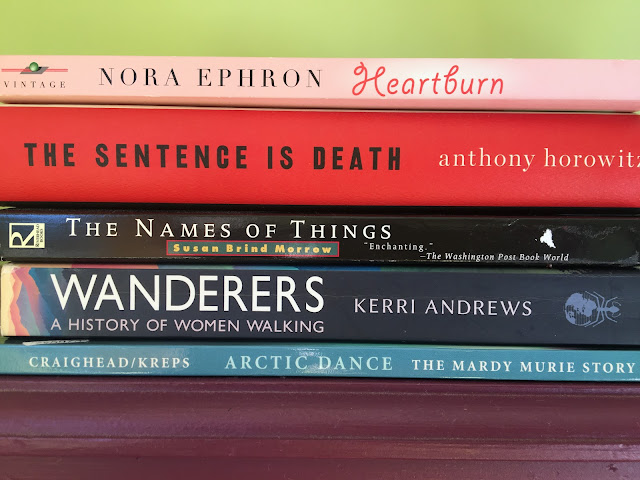 My last post was about how fast October went by, and now here we are, already halfway through November. What? I've been spending this week deep-cleaning my kitchen in preparation for Thanksgiving. On one hand, it's deeply satisfying--getting rid of stuff I don't need, finding things I've been missing or forgot I had (Although I did not find my garlic press. How does one lose something like that??), seeing my Fiesta ware all clean and shiny and lined up on the shelves. On the other hand, I'd rather be curled up with a book, like one of these I read last month.
Audiobooks (not pictured above):

I had some credits left in the audiobook account I got last year for my long cross-country journey. The first two volumes in Richard Osman's Thursday Murder Club series got me through a good deal of the long drive home, and I really loved the narrator so when the third installment, The Bullet that Missed, came out in late September, I knew I had to listen to it. But when? I didn't have any long car rides planned, so I wasn't sure when I'd fit in listening to an audiobook. I downloaded it anyway and listened as I was going to sleep at night, and again when I got up in the morning, to catch up on the bits I'd dozed through, and while I ate breakfast and lunch, and when I went on my afternoon walk, and while I cooked dinner, in short, at every chance I got. After I listened to Bullet, I went back and re-listened to both of the first two in the series and then I listened to Bullet again. I love the characters, the plot twists, the humor, the light-handed social commentary. I'm back to reading on paper again, but now that I think of it, I should have listened to this series again while I cleaned the kitchen!
Fiction
Now when I walk, I listen to podcasts, often Selected Shorts, and that's where I heard an excerpt of Nora Ephron's Heartburn. I enjoyed it so much, I picked up the book, which is entertaining and funny and a little maddening (the husband is a rat).
And back to murder, we visited M during homecoming weekend at his college in October, and as always when we're there, we popped into the book store, which always has good deals on the clearance shelf, which is where I picked up Anthony Horowitz's The Sentence is Death. Now I recall there being something about the first book in this series (The Word is Murder) that frustrated me--a flaw in the timeline, I believe (strangely I can't find it in my past blog posts!). But I've enjoyed Horowitz's other mysteries, so I gave it a chance and enjoyed it thoroughly (in part because the mild October weather allowed me to read it in my hammock!).
Nonfiction
After my Amelia Peabody jag of August and September, I wanted to keep it going with the Egypt theme, so I found a copy of a book I've been meaning to read for a long while, The Names of Things, by Susan Brindles Morrow, about the author's time spent in Egypt and Sudan as a young woman, traveling to remote regions of both countries. It's written in very much the lyric vein, as in much more impressionistic and poetic than factual and detailed. It's a beautiful book, and it made me wish I'd been that brave when I was young.
Wanderers: A History of Women Walking by Kerri Andrews is a book I picked up in Colorado when I was there last November, and somehow it took me a whole year to read it, dipping in and out. It tells the story of women writers for whom walking was an important aspect of their lives, such as Dorothy Wordsworth, Virginia Woolf, Anais Nin, Cheryl Strayed.
In other book news, when I cleaned out my closet, switching summer clothes over to winter, I went through the box of books that I'd stashed in there as well as a couple of other teetering piles of books in other corners of my room, and decided that I'm not ever going to get around to reading most of them, and ended up taking a large box and a bag of books to the used bookstore! My original goal was to read all the books I have and then get rid of them, but if they've been sitting around for years getting pushed aside in favor of new books, I think it's a good sign that it's never going to happen. Now someone else can enjoy them.
Finally, Arctic Dance is a biography of Margaret Murie, author of Two in the Far North and Wapiti Wilderness the "mother" of the modern American conservation movement. This book is a companion to the documentary of the same name (narrated by Harrison Ford!), and is filled with photos and stories that fill in the gaps about Murie's life that don't make it into her books. She was a courageous, self-effacing, gifted woman who made the world we live in a better place.
Posted by Andrea at 12:19 PM 1 comment: 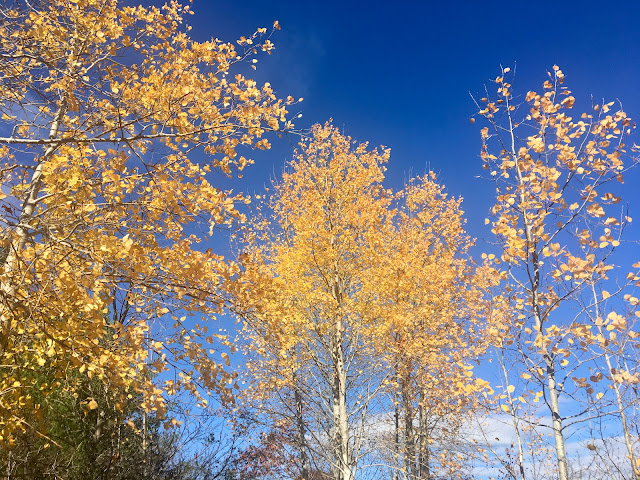 I'm trying very hard not to start this email with a banal statement like, "Can you believe it's already the end of October?" Because I can't believe it. Where did the month go?

I've been trying to buckle down and focus on my new book project this month, but it's at that big, unwieldy stage where it's hard to see where I'm going or how I'll get there. So instead I seek distractions. One of those distractions is going on mini adventures--a trip to the beach with friends, a hike on a nearby trail. I read in Laura Vandercam's newsletter the recommendation to have one big and one small adventure each week. I can't remember why she recommends this, but for me adventures serve several purposes: getting me out of the house and out of my head, exercise, time with other people, and a teeny bit of excitement. C and I have been watching the TV show M*A*S*H lately, and during the opening credits, I feel this little thrill in my chest when the helicopters come in and the medics run up the hill. I want that, I think, although I definitely do not want to either be in the army or work in the medical field, but I want that surge of excitement, that urgency, that sense that there's something so important that I need to run to get to it (is that why people take up jogging?). While there's not, and not likely to be, anything of such urgency in my life, I can at least create a little excitement by getting out on mini adventures.Today my method of distracting myself was less exciting even than a hike--I spent the morning reading my old zines. Back before I wrote e-newsletters and blogs and books, I created a print zine--producing 13 issues over seven years. In the back of every issue I included a roundup of amusing things my kids said (which were no doubt more amusing to me than they were to my subscribers). I pulled the zines out because I remembered that one of the boys had invented a new word for one type of rain. (I swear this was related to an essay I was toying around with.) I found the quote, which had come from from E: "It was not dribbling, pouring regular rain, or sprinkling. Might have been twizzling." But I couldn't stop there and started reading all their adorable quotes and then looking at my hilarious cartoons, and then reading bits and pieces and whole essays, and pretty soon, an hour and a half had evaporated.The funny thing is, I don't feel like the same person who wrote about trying to get three little kids to bed or deciphering toddler twin talk. Did any of that actually happen? To me? If I didn't have a written record, I wouldn't believe it. And if I didn't have a photographic record, I'd hardly believe the boys were ever so small. Last week I got the prints of E and Z's senior photos and, for the last time, did the annual tradition of taking apart the picture frames and going through all of the photos stacked behind the current one, from preschool to now, laughing at the various stages (Jack-o-lantern teeth, tough-guy third grader, suit-n-tie sixth grader, crossed eyes, crazy hair, the year I forgot about picture day and they were dressed in rags with bird-nest hair). Although there's a glimmer of familiarity between those earlier photos and now, it's hard to believe they're the same people as these big, tall men I now live with.I've heard that all the cells in a person's body are regenerated every seven years, so in a way they really aren't the same people, and neither am I. But if that's so where have those other people, the ones we were then, gone?
A version of this post went out recently to subscribers of my newsletter, along with some bonus material. Subscribe here and receive a free PDF of my illustrated short essay "Eleven Ways to Raise a Wild Child."
Posted by Andrea at 7:03 AM 1 comment: