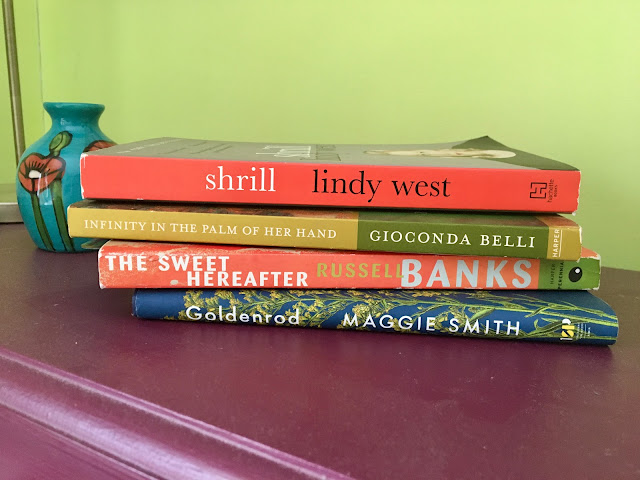 As 2021 drew to a close and I realized I was never, ever going to finish reading all of the books in my stack if I just read books based on what I was in the mood for, I decided to take a different approach, and prioritize reading books that were given or loaned to me. My reasoning was that even if they weren't books I might have chosen for myself, they came from people who care about me and who had good reasons for thinking I might like the same books they like. So I resorted my stack into two piles: "purchased" and "given/loaned to me." (If you see a book come up in a post that you loaned me and that you want back, let me know! I might've forgotten.) From here I'm going to plow forward and read those books in the second pile, with occasional forays into the other pile (and a really strong effort to not buy any new books until both piles are depleted). So without further ado, here's what I read in December:
Nonfiction
Shrill by Lindy West. This one my brother and sister-in-law gave me for my birthday. I wasn't familiar with West before reading this--she's a humor writer who takes on internet trolls (specifically misogynistic and fat-phobic trolls) in her work. She managed to take on a lot of difficult subjects in this volume--fat shaming, abortion, rape "jokes" in the comedy world--and make an entertaining read at the same time. I'm now watching the series by the same name. I see West also has a new book out, which I'm not allowed to buy (see above) until I've made a reasonable dent in the stack.
Fiction These books were both given (loaned?) to me be the same friend. Which is interesting because they're extremely different.
The Sweet Hereafter by Russell Banks. After a school bus accident, a town splits in half over who to blame and how to extract payment. It's written from many different viewpoints (I think around five or six) with one really long chapter per POV character. It's an interesting look into human psychology and kind of a relevant take on today's divided world, only from a nonpolitical standpoint. I can't say I enjoyed it, because it's about dead children, but I was carried along by the story and definitely moved by the characters.
Infinity in the Palm of Her Hand by Gioconda Belli. This is a reimagining of the Adam and Eve story, which is definitely not something I'd normally pick up. I found it a little silly, especially the way Adam and Eve discovered/invented about 10,000 years' worth of human developments in their first year out of Eden (sort of like the way Ayla makes all of the human discoveries/inventions in Clan of the Cave Bear, only Eve's not as charming as Ayla and Adam's not as smoking is Jondalar). But, if you like fantasy and reimagined mythology, this might be right up your alley.
Poetry
Goldenrod by Maggie Smith. I did buy this book, before I (re)committed to not buying new books. I admit to being sold by the cover (goldenrod flowers on a blue background). But the poems inside are lovely and moving. I read a little of this each morning in November during my trip to Colorado and finished it up in December after I got home. The poems were a grounding and meditative way to start each day, and each one gave me pause for thought. I'd like to read it again to really drink it all in.
I read a total of 59 books in 2021 (including 4 audiobooks), which should have been enough to make a serious dent in the book stack, but only about 20 came from the stack. Still, that was more of a dent than I thought I'd made. Now if I can double that number, I might be able to see my floor beneath all those books!
Posted by Andrea at 7:46 AM 1 comment: 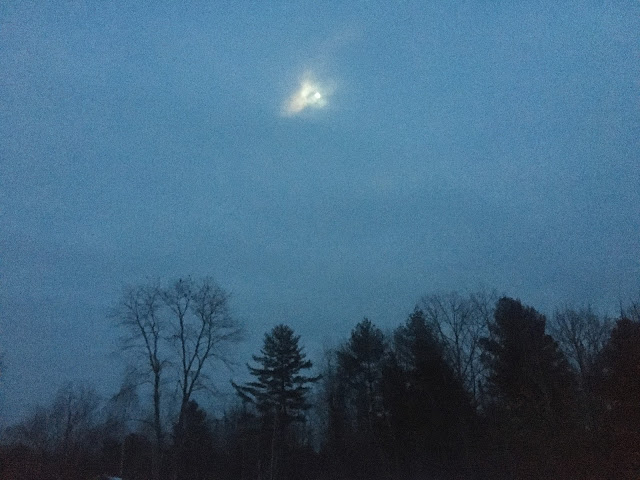 It is what I call the blue time of year--even on a gray day the clouds are tinged with blue, as are the snow and the trees. Yesterday the wind blew so hard the tree trunks made animal sounds where they rubbed together. Today is so calm I can hear the traffic on the next road over, a dog barking across the river, the shifting of a board back by the garage. My ice spikes crack and crunch on the glazed driveway, each step a pistol shot. A faint breeze sends the leaves of a young beech shivering, a dry, papery, gothic sound. Otherwise the world is still. The birds and squirrels away to their roosts and nests, the predators awaiting dusk.

The air is cold. Not the bitter, biting cold of earlier in the week, but a damp insipid cold that makes inroads at cuffs and seams, anywhere layers of fabric overlap. Even on a short walk my mind flickers to other places--conversations from earlier in the day, vegetables that need chopping, the evening's plans. I try to yank it back to the blue world. The here and now.

Back at the house, I see the Christmas tree propped against the doorframe and remember that today is January 13, St. Knut's Day, the day Scandinavians take down their trees. I believe they burn theirs in Sweden, but I can't stand the thought and instead we return ours to the woods it came from, where it can be a refuge to small birds and animals.

I lift the tree by its slender trunk and set off through the woods, off piste. In the chiaroscuro of a winter's evening--white snow, black twigs and branches--it's easy to find a pathway among the trees to the field below, where the dried stems of tall white aster stand chest high. I find a trail across the field, the one the boys use to get to their skating rink on the river, the snow trampled and refrozen in icy footprints, and I follow its winding route through the trees. I feel rushed by the lateness of the hour. It will be dark soon, I have places I need to go this evening, things I need to get ready. So I don't take the tree all the way to the river bank, but set it in the snow beside the trail, thank it again for bringing warmth and light and green into our house in the darkest part of the winter, and turn toward home.

My hands are sticky with balsam sap, and I bring them to my face, breathe deeply the scent of solstice and Christmas, family and winter, life and light.

This is a new series, where I plan to write a flash piece (nonfiction for now, but maybe fiction later) every Friday of 2022.

Posted by Andrea at 9:06 AM No comments: 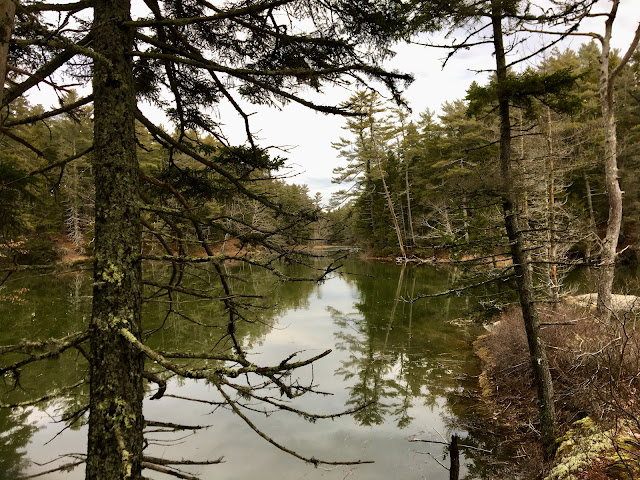 Turn Toward the Light 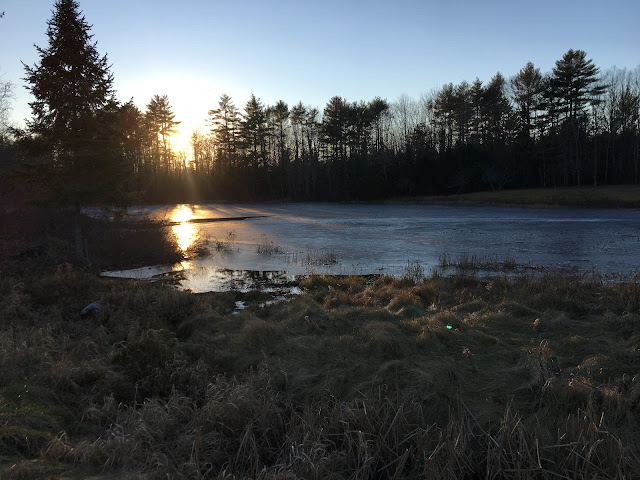 We usually celebrate the Winter Solstice with stringing popcorn and cranberry garlands and birdseed ornaments on the spruce tree out front followed a walk into the woods and a small fire on the bank of the Eastern River. Sometimes we take Christmas cookies and a thermos of hot chocolate to enjoy by the fire, and once we had a picnic of cheese pasties. This year, though, the turn from darkening days back toward the light passed with barely a notice in our house. The boys were off on a last-minute shopping adventure and I was on a conference call. Such is the pull of capitalism and obligation that the rhythms of the earth get shunted aside. This is nothing new--back in those hot cocoa and cheese pasty days, we often practiced "Solstice, Observed," as if it were a federal holiday landing inconveniently on the calendar whenever work or a school concert or an ice storm interfered with the actual moment the earth turned back toward the sun.

The arrival of the shortest day of the year, however slight was my notice of it, did clarify for me why I've been so tired lately (other than, you know, the apocalypse); it's the time of year for burrowing, for hibernating, for settling into the subnivian zone with a cache of seeds and avoiding owls. It's not the time to scramble to finish my "21 in '21" list or to endlessly shop to fulfill an open-ended Christmas list. A cashier asked me yesterday if I was "almost done" and I answered truthfully, "I'm never done, I just keep shopping until Christmas." Much of that comes from having teenagers who can't think of a thing they want until a week before Christmas, but the rest I can attribute to an anxiety around not being enough, not "doing it right." Oh, yes, and a slight problem I have with buying myself a present for every two I buy for other people.

When I'm not out single-handedly propping up the economy, I try to get into the holiday spirit by watching cheesy Christmas movies on Netflix. I don't know who got the idea that Christmas was somehow an ideal setting for romance (I suppose Bing Crosby in White Christmas was the first culprit), but it is a thing, and most of the movies in this genre are painfully awful. I did, however, enjoy Holiday in the Wild, in which the protagonist (actress I didn't recognize) goes to Zambia on her second honeymoon--alone, because her husband leaves her the minute their kid heads off to college. (There's a recurring theme in these movies of characters planning elaborate, expensive trips without the buy-in or knowledge of the other person involved; see A Very Brady Christmas.) Once in Africa, she develops an attraction/antagonism for a bush pilot played by Rob Lowe. She ends up working on an elephant preserve and staying through Christmas. As far as the storyline goes, it was almost as cheesy as other holiday romance movies. But there were elephants. And Rob Lowe. And it wasn't the romance that fixed her life, it was the meaning brought to it by doing important and valuable work. It makes me think there's another, better way to do the holidays. Like rescuing orphaned elephants.

But unless tickets for an elaborate and expensive trip to Africa that's been planned without my knowledge appear in my stocking Christmas morning, I don't think baby elephants are in my future. I probably wouldn't be all that good at taking care of them anyway (I have issues with poop). But perhaps there's some other way of turning off the money spigot and finding meaning not only in this season, but in life in general. Maybe I'll start with a "Solstice, Observed" hike into the woods with my family, after the ice storm, were we can sit in the dark and listen to what each other has to say and what the trees have to tell us.

This post went out recently to subscribers of my newsletter, along with some bonus material. Subscribe here and receive a free PDF of my illustrated short essay "Eleven Ways to Raise a Wild Child" and also be entered in a monthly drawing to win a print of one of the illustrations from Uphill Both Ways.