So the bad news is I didn't finish writing my book before April 1, but the good news is I read lots of other people's books. I mean lots of them. Holy cow, it was a read-ey month. Look at that stack. Think I was trying to avoid something else I should have been doing (like writing my book)? Well, maybe, though some of the books were read in service of my book, and really, you can't lie in bed writing a book at ten o'clock at night, but you can lie in bed reading a book, especially a rollicking good fun one. So let's get started. 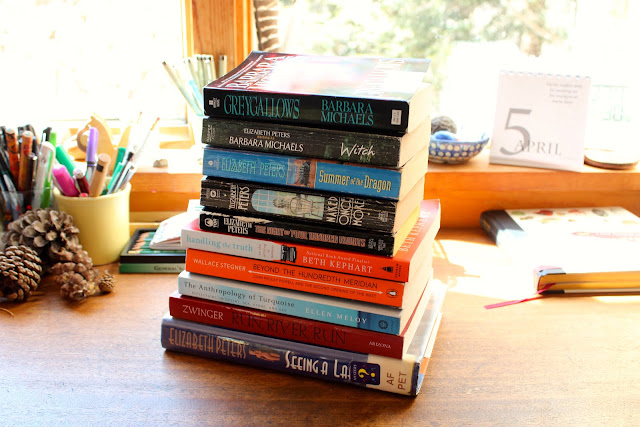 Craft/Inspiration
I was able to maintain my habit of reading a craft or inspirational book (it's what I read during breakfast) last month, with Beth Kephart's Handling the Truth: On the Writing of Memoir. And it was so good. Kephart is such a kindred soul. I love every word I've read of hers. On many mornings, I had to jump up from my reading and go work on my book—add in details or weather or landscape or dialogue or something Beth (can I call her Beth?) reminded me my writing needs.

Nonfiction
My nonfiction reading took me a little bit west of my writing topic to the Colorado Plateau. I started with Run, River, Run by Ann Zwinger, which I bought last summer at Dinosaur National Monument, on the Green River. Zwinger's books have everything I want mine to have—beautiful detail, scientific and historic information, humor, gorgeous drawings. She was an artist and art historian by training and this comes through in the way she sees and describes the landscape. By the way, if you love National Park book shops and National Park passport stamps as much as I do, you can marry the two by stamping inside the front cover of books you buy, to commemorate the date and place of purchase. Book shopping really doesn't get much more awesome than that. 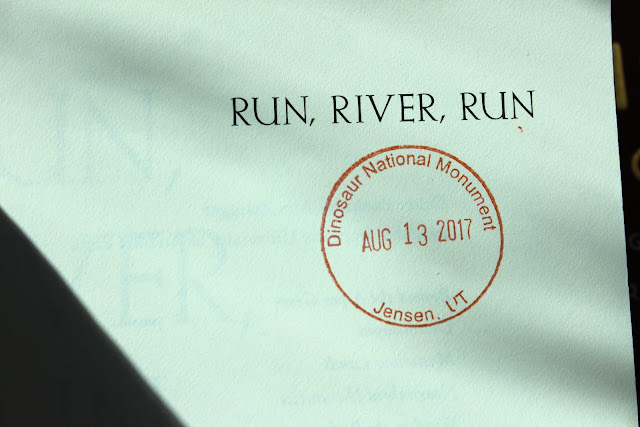 I then read another National Park purchase (Black Canyon of the Gunnison, July 12, 2015), Beyond the Hundredth Meridian, by Wallace Stegner. While the story of John Wesley Powell does not pertain in any specific way to what I'm writing about in Colorado, this is one of those seminal books about the West, which I should have read by now anyway and figured it would in a general way shed light on Westward Expansion, which very much pertains to my book. It's really a good book—Powell was a fascinating figure, and Stegner is so insightful and his writing so vivid that I was gripped. But, I don't know if everyone would agree. I was reading it in the hot tub at the spa one day and a woman asked if the book was anything like A Walk in the Woods. "Not exactly," I said. "It's more like a history and a biography." She shuddered and made a face like I suggested she take a big gulp of hot tup water. Chacun à son goût. But it's important to read history, don't you think, for what it can tell you about your own time. Stegner, writing at the approach to the pinnacle of scientific advancement in this country, looks back with quaint puzzlement at the anti-scientific forces Powell had to contend against as chief of the Geologic Survey. He had no idea that fifty years later the anti-science forces would rise again.

Since I was already in canyon country (and because a friend recommended one of the essays and I already had the book on my to-read shelf), I read The Anthropology of Turquoise, by Ellen Melloy, a collection of essays meditating on, among other things, deserts, oceans, and, of course, turquoise. Melee's writing is both lovely and humorous and reading it made me really, really want to hop in my car and drive southwest, away from winter with all due speed.

Fiction
My mom has been sending me Barbara Michaels/Elizabeth Peters books as she runs into them in used book stores and I added to the collection when I found myself in a couple of used bookstores over the last weeks. This month's volumes: Greygallows (Michaels), a gothic novel with Brontean overtones (the brooding husband, the big gloomy castle, the housekeeper with divided loyalties). Witch (Michaels) a modern gothic tale set in an old cottage in the woods, with a handsome neighbor, god-fearing townspeople, and a ghost. This is one of the few Peters/Michaels books in which the protagonist is a mom (Amelia Peabody and Jacqueline Kirby are the only other two I'm aware of), so that was fun and I liked the idea of running away to a cozy cottage when my kids get old enough to take care of themselves. Night of Four Hundred Rabbits (Peters), a suspense novel set in Mexico City, with all kinds of corny '70s lingo and a classic Peters-esque take on current social issues (in this case drugs). Summer of the Dragon (Peters), another suspense novel, this one takes place in Arizona.  I've read all these books before and even if I don't remember the plot exactly, I know that the character you least suspect will turn out to be the bad guy (he's usually stunningly handsome, too) and the fusty older dude who acts a little weird ends up being the hero (although in the case of Dragon, he's hot, too). But they're still suspenseful and fun to read. Finally, Naked Once More (Peters), one of a short series starring librarian-turned-romance-novelist/detective Jacqueline Kirby. Jacqueline is middle aged, a mom (maybe even a grandma), but still smart and sexy and up to the task of finding whoever it is who wants to murder her. Barbara Mertz (who is behind the noms de plume of Michaels and Peters) never wrote a writing memoir (that I know of), but I think Naked comes close. For instance:

"There is no sensible answer to that question," Jacqueline said irritably. "Nor to 'how far along are you?'"

I wish I'd highlighted all the good quips about writing as I read. Just have to read it again, I guess.

Read-Aloud
Finally, and since this is a ridiculously long post already, I'll just mention that E and Z are still loving the Amelia Peabody books, even though Ramses is grown up and not nearly so precociously loquacious. Their favorite characters, in addition to Ramses, are Abdullah, Daoud, Cyrus Vandergelt, Kevin O'Connell, and, of course, the Master Criminal, even though we haven't seen much of him in the last few volumes (E thinks he's disguised as Nefret). Last month we read Seeing a Large Cat.

Well, that's about it. Enough, anyway. Happy reading this month!
Posted by Andrea at 12:37 PM No comments: