The calendar says spring, but outside my window now, snowflakes are sifting gently but steadily down from the sky. 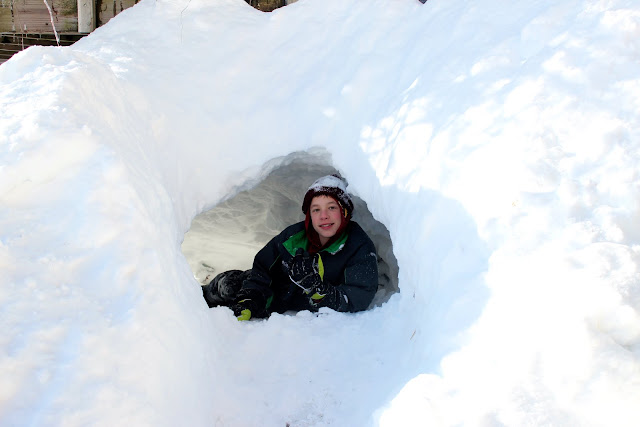 It's been a strange winter, with March making up for the almost snow-free February with interest. 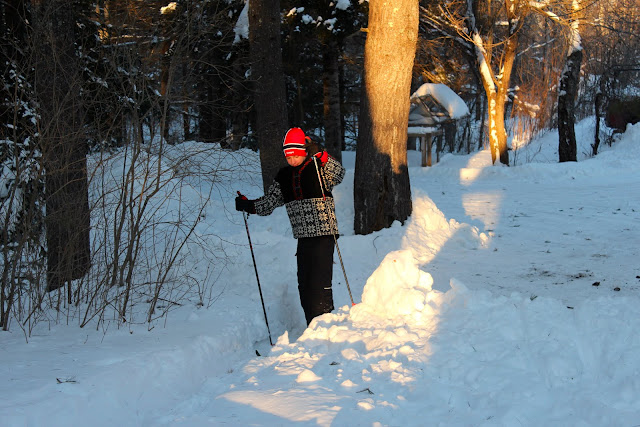 C put the skis and snowshoes away in the barn loft a month ago, and at least two feet of the white stuff has fallen since then. 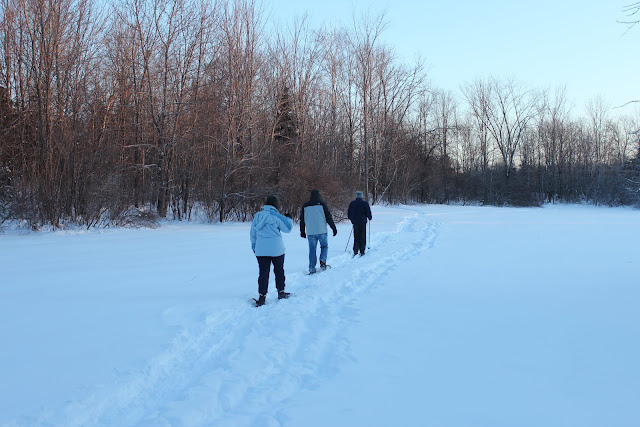 Spring in Maine may be a state of mind and not an actual season, but the birds have gotten into the spirit—woodpeckers drumming, chickadees whistling "hey sweetie," and the little tufted titmouse tweeting "chiva-chiva." 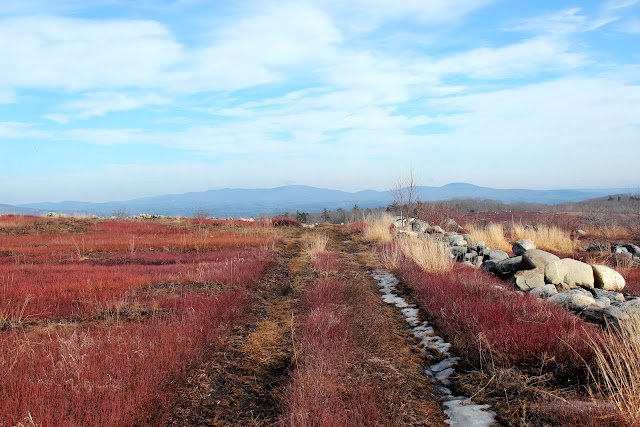 Meanwhile, I've been sequestered indoors, doggedly working toward my self-imposed deadline of completing my book by April 1. 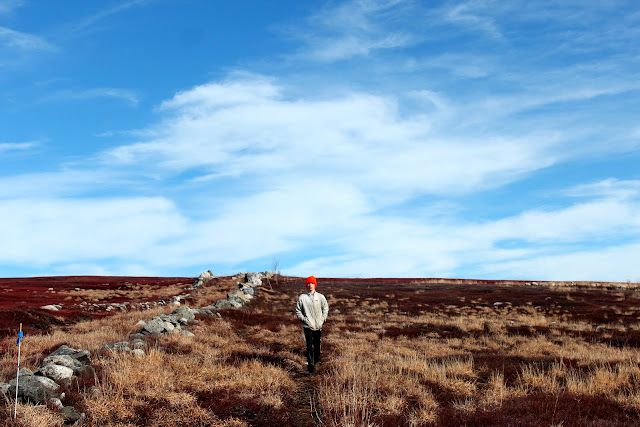 I don't think I'll make it, but I'll be close. Closer if I could just learn to say "no" to all kinds of things that sound a lot more fun than reading tomes on environmental law and geology. 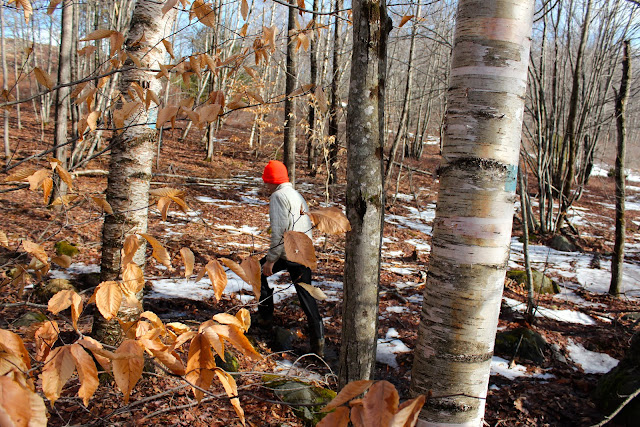 While I have avoided most other writing projects—including this blog—I haven't only been writing the book. 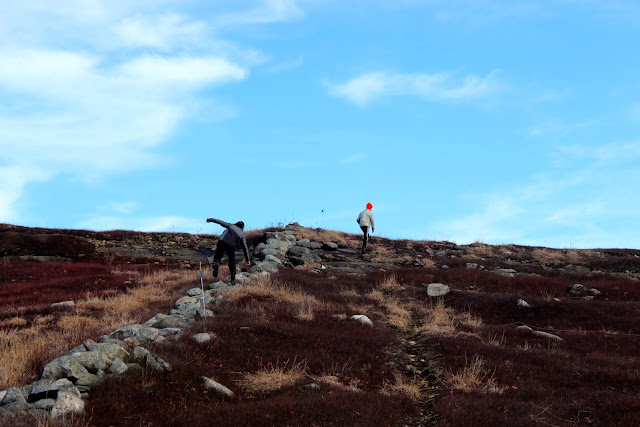 There's been skiing and snowshoeing and hiking and walking up and down the muddy driveway, depending on the weather. 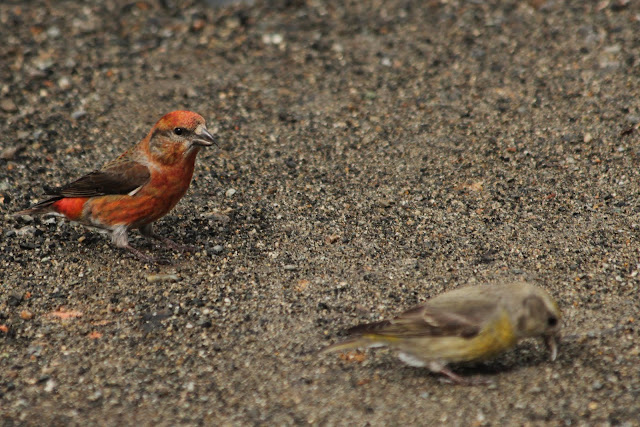 And twice I've gone "up north" on birding expeditions to see crossbills, which are pretty much like coming across parrots in the wilds of Maine. So beautiful (and they like to hang out on the road shoulders, nibbling gravel). 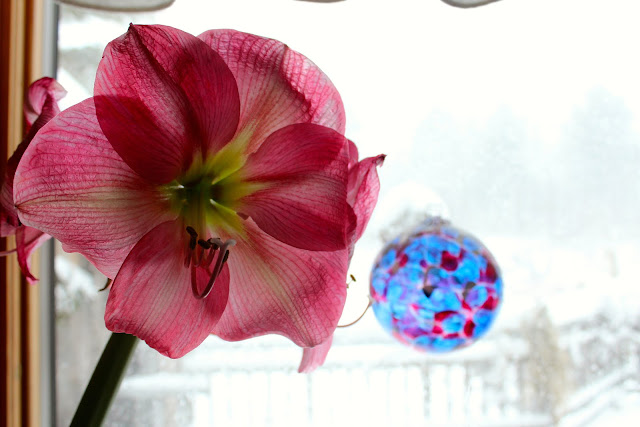 The boys have had A LOT of snow days, like double-digits snow days. 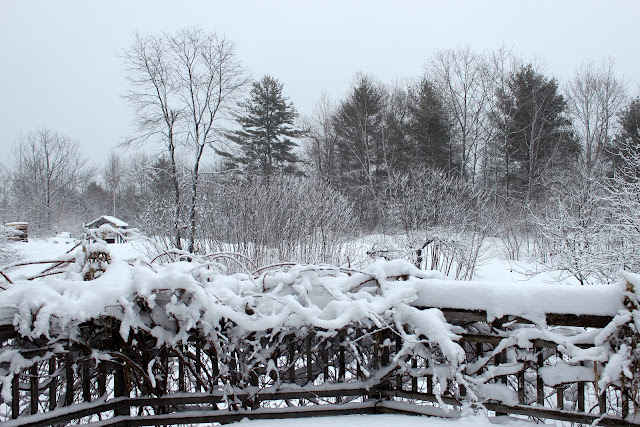 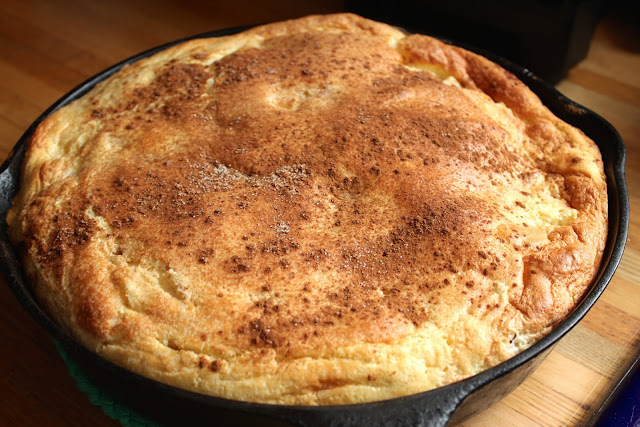 Sometimes I'm "go outside and then read quietly in your room while I get some work done. No Minecraft" mom. 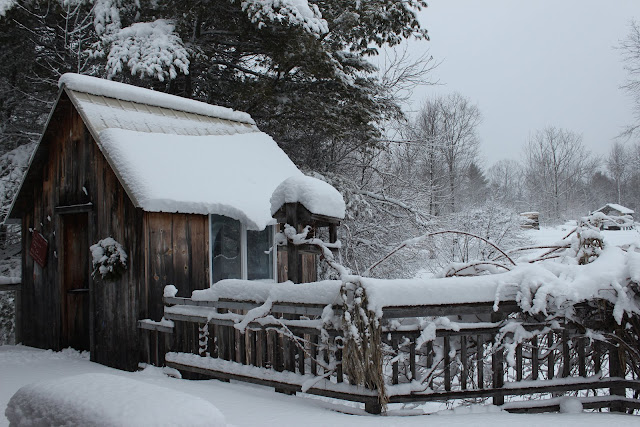 It is, no doubt, premature to call this a winter "roundup" while snow drifts around outside my window—kind of like C putting away the winter gear in mid-February. Stay tuned for "winter addendum."
Posted by Andrea at 11:03 AM No comments:

I was nose-to-the-grindstone all February—no blog posts, no newsletter, no nothin' but writing a book. Okay, maybe that's not entirely true. I have actually been knitting and quilting quite a bit, which I'll share about here soon, and getting outside, whatever the weather (and the weather was mostly icy), but all my writing energy is directed to one goal—and it's paying off. I don't know if I'll meet my goal of finishing by the end of this month, but I'll be close. In the reading department, I had so much reading to do for research, I tried to forbid myself from reading anything for fun, but that didn't work out so well, as you'll see below. 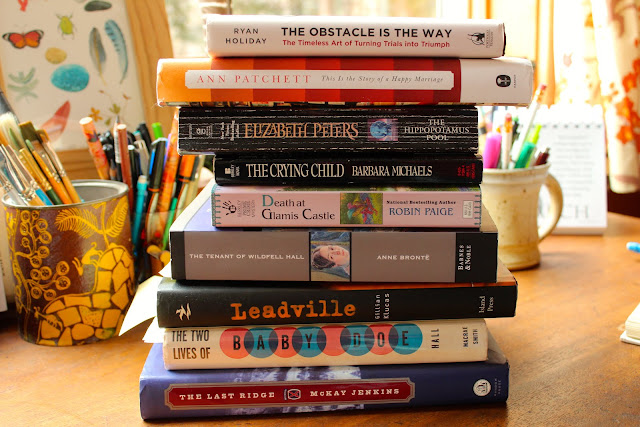 Craft/Inspiration
I try to keep one book on the craft of writing or some otherwise motivational topic, although I had fallen out of that habit over the prior few months. I got back on track in January and February (sometimes it takes me more than one month to finish a book) with The Obstacle is the Way by Ryan Holiday. This is not the kind of book I would be likely to pick up on my own—it's very guy, if you know what I mean, with lots of references to athletes and army generals. But my brother-out-law gave it to me for Christmas the year before, so I figured I'd try it. His recommendation had been to dip into it when I was feeling stuck, and while I'd done that over the last year, I wasn't getting very far and decided to dive in and read it straight through. I found a lot of helpful advice in it, like don't waste energy on things outside of your control (geez, someone could have told me that about ten years ago), instead put that energy into reaching your goal. Okay, yes I can do that. And much more, too, of course, it just so happened that those two bits of advice were very timely and useful when I red them.

The other book in this category, which perhaps does not belong here, or in this post at all, since I didn't actually finish reading it, is This is the Story of a Happy Marriage by Ann Patchett. Have you ever noticed that the titles of essay collections and short story collections rarely fit the whole book, because they often come from the title of one piece? This is one such collection, and I would never have thought to pick it up (who wants to read about a happy marriage, anyway?) if someone hadn't suggested it to me and if I hadn't happened to have found it at a used book store. The intro and one of the first essays are about writing and the writing life, and really, what writer wouldn't prefer to read about writing than actually write? Am I right? The one about how Patchett subsidized her novel-writing by freelancing was especially interesting to me, since I've just started freelancing myself. Not that I have any illusions about it paying the bills (or of ever working for Gourmet or GQ), but I liked how she described the way skills developed in freelancing translated to novel writing. The rest of the book, I just gold-mined, reading what sounded interesting (an appearance at a college in the south where a few parents were up in arms about the book Patchett wrote, the opening of her bookstore), skipping what didn't (anything about dogs or marriage).

Nonfiction
February's nonfiction reading was all in service to The Book. I was working on a chapter (for most of the month, believe it or not) about an area of our hike heavy in history (including my family's history) and I finally got around to reading three books that have been on my shelves for years: The Last Ridge by McKay Jenkins, about the 10th Mountain Division (WWII soldiers training in skiing and mountaineering, who fought on the Italian peninsula), Leadville, by Gillian Klucas, about the absolutely maddening effort to clean up mining waste in the eponymous town (any of my friends who work in Superfund and find their projects frustrating, read this book and you will think you're on a cake walk by comparison), and The Two Lives of Baby Doe, by Gordon Langley Hall, about one of Colorado's most famous/notorious historical figures and her rags-to-riches-to-rags story.

Fiction
Like I said, I wasn't going to read anything for fun in February, but then I thought, just one book read only at bedtime wouldn't hurt, so I picked up Death at Glamis Castle, by Robin Page, a very mildly gothic murder mystery set around the turn of the century (I've read two others in this series, all wildly out of order, but still entertaining). And then I pulled The Crying Child by Barbara Michaels off the shelf. I though I'd finished all my Mertz/Michaels/Peters books, but this one appeared out of nowhere. Also a gothic tale, this one with actual ghosts, set on a Maine island of all places (it is funny to see how Mainers are portrayed by people "from away"). And then I figured I might as well labor on with The Tenant of Wildfell Hall by Anne Bronte. I bought it last winter after PBS had a show about the Bronte sisters and I became interested in the lesser known two. I started a few months ago, but it was slow going at first, as most Victorian novels are. Once it got going, though, it was a real page-turner. As in I barely put it down over one whole day (luckily I was wearing these socks).

Read-Aloud
Finally, E and Z continued our Amelia Peabody adventures with The Hippopotamus Pool (by Elizabeth Peters, of course). I was retelling the story I wrote about last month, and E corrected me, saying it was actually Z who didn't get that they were mysteries, and that it's Z who doesn't know what's going on half the time, but that E follows along just fine. So I stand corrected. Hippopotamus is the last book in which Ramses appears as a child (if you count 16 as no longer a child; I know my 16-year-old does) and I thought they wouldn't want to stick with it, but we've carried on. Besides Ramses, they like Kevin O'Connell and Cyrus Vandergeld, and they are waiting with baited breath to see if the Mater Criminal is alive or dead. Z is either very confused (or just pretending to be very confused) that some characters are real people (Wallace Budge, Howard Carter, Lord Cromer) while others are not (O'Connell, the Emerson-Peabodys, Cyrus). Anyway, I'm enjoying reading the series all over again as much as they're enjoying listening to them, so expect many more installments!
Posted by Andrea at 2:10 PM No comments: