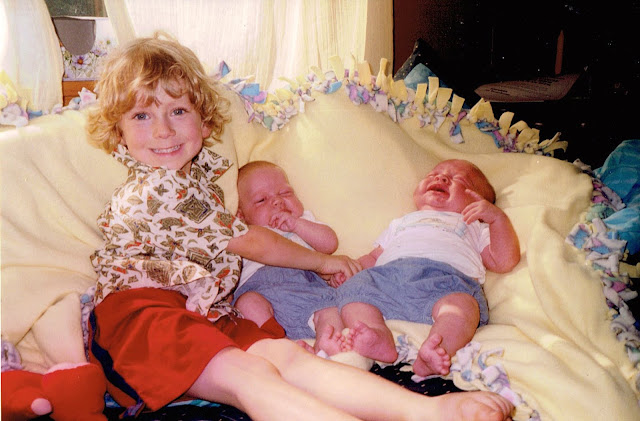 Ever since I heard the poet Naomi Shihab Nye say a few years ago that she had excised the word "busy" from her vocabulary, I've tried to do the same. Now, whenever the B word hovers on my lips, I try to instead think of life as "full" or "abundant." Whenever things start to get a little too full, I know it's time to cut back.But I have a hard time cutting back in May, the most abundant month of all, with three kids' birthdays, spring sports, our annual camping trip, and the hurtle toward the end of the school year. It's the time of year I most want to slow down and reflect on my children's growth and changes (and my own) and watch the unfolding of spring outside my window, yet it's the time of year when slowing down is most difficultThis week brought the most significant birthday of my mothering career so far (not counting the actual birth days of my children): M turned 18 on Monday. At the time of his first birthday, my go-to line (only semi-joking) was I don't know how he can be one, because I'm not a year olderThe same holds true today: I don't know how he can be 18, because I'm most certainly not 18 years older. And also, I don't know how he can be 18. I've been making lots of jokes about how my work is finished (or "done 'n dusted," as I like to say), but I'm also barely holding down a large burst of freaking out.Which is where a month of great abundance comes in handy. We threw a party for M with 50 or so of his nearest and dearest (what can I say, the kid is loved), and, in the spirit of not completely giving his younger brothers the shaft, we had a much, much smaller party and sleepover for E and Z the previous night. We still have various playoffs to attend and a camping trip to pack for and unpack from, I'm attending a writing conference at the end of the month, and I try to squeeze in a bird walk here and there. At some point, however, the abundance will abate, and I won't have any choice but to will slow down and reflect on the fact that my first baby is 18 years old.
This post went out last week to subscribers of my newsletter, along with some bonus material. You can subscribe here.

Posted by Andrea at 5:28 PM No comments:

I'm acutely aware these days—with my oldest son's 18th birthday and high school graduation approaching and the twins turning 14 and finishing up eighth grade—of the approaching finish line. I know, I know, once a mother, always a mother. But it feels like much (I was going to say "most," but I didn't want to jinx the next four years) of the heavy lifting is behind me, the caretaking, cake-baking years (though no doubt there will be plenty of heart-breaking years ahead). I approach this transition with a mixture of teary-eyed nostalgia and giddy anticipation—for all the adventures that lie ahead for my kids and for those that I hope lie ahead for me. 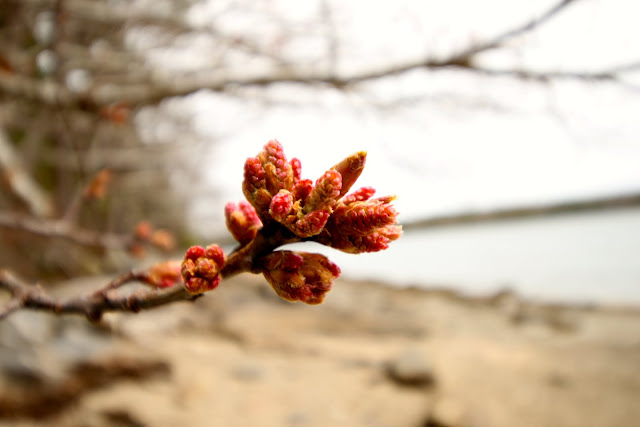 In the meantime, we celebrated Mother's Day by going on a hike at one of our favorite natural areas, after picking up pastries at one of my favorie bakeries. It's a place we've gone hiking at again and again over the years, usually around Easter or Mother's Day. We can measure the passage of time by how much the kids have grown in comparison to how much the fallen spruce tree's root mass has shrunk. 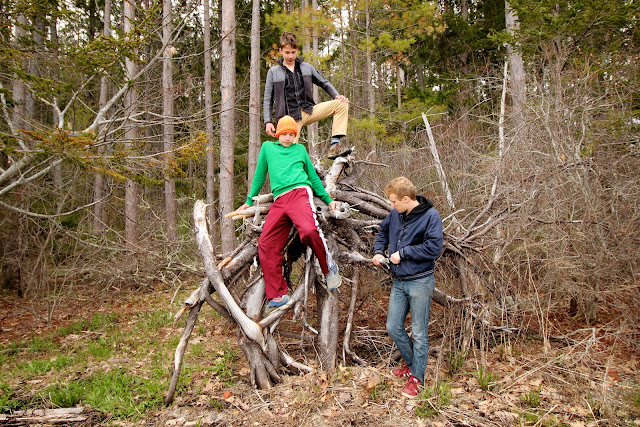 The place, as such places are, is infused with memories: Finding hermit crab shells and deer antlers. The time five-year-old M picked up a giant piece of birch bark as he was walking, not realizing it had been placed to cover a giant dog turd, which he proceeded to step in in his brand-new shoes. The enormous rock shaped like an Easter egg that three-year-old E found and then carried a couple of miles back to the car, staggering all the way  (and, of course, how a few months later Z threw said rock and hit E in the head, defending himself thus: "I said, 'Watch out!'"). 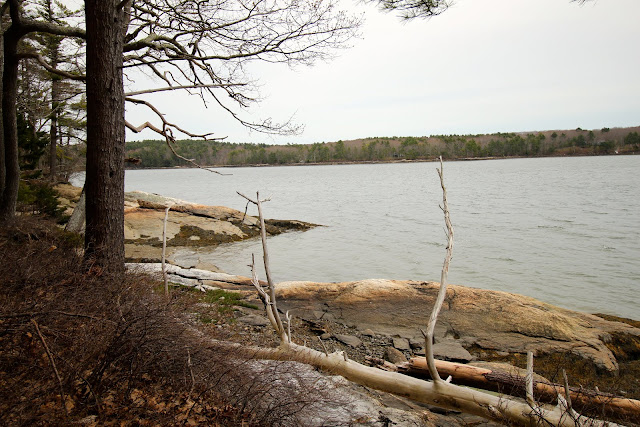 In a sign of imminent independence, M met us partway around the hiking loop after he got off of work (a busy Mother's Day morning shift, which a secret informant told me M handled with aplomb), bearing a gift he went out of his way to get and a card he made with a message written in his uniquely funny and heartfelt voice. 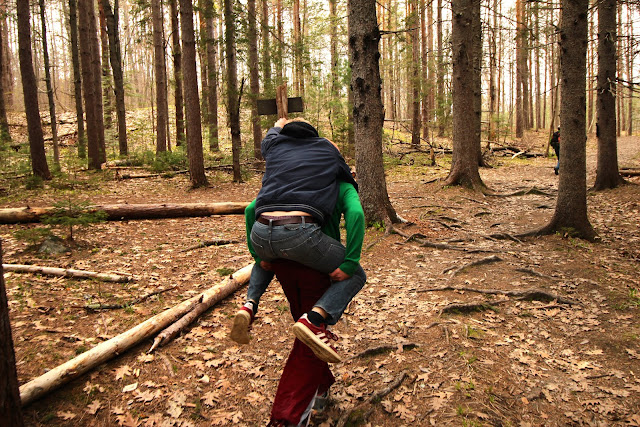 There are so many times over the course of raising these three kids when I've felt out of my depth, certain I'm doing it all wrong. But for Mother's Day, at least, out in nature with my kids, with so many memories behind us and so much possibility ahead, I felt as if I haven't done all that bad.

This post went out last week to subscribers of my newsletter, along with some bonus material. You can subscribe here.

Posted by Andrea at 6:41 PM No comments:

A post about the books I read in the last month (or two or three).
January 2019 Reads

This will be my last post of the "what I read last month" type. I will continue posting on what I'm reading, but I'm going to freshen things up with a new format starting next week, so stay tuned! In the meantime, here's two-and-a-half months' worth of reads for your armchair-reading pleasure. 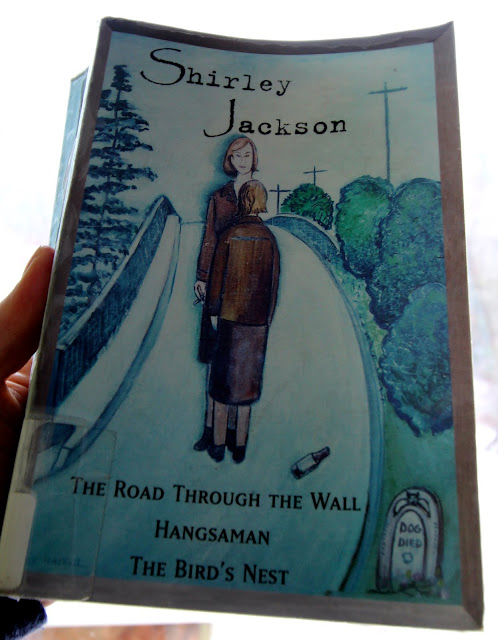 I continued my deep dive into the Shirley Jackson ouevre (which began in February with Ruth Franklin's biography of the author) by reading Jackson's first two novels, The Road Through the Wall and Hangasman (collected along with the third, The Bird's Nest, which I ran out of time to read before the book was due back at the library). These were both slightly odd books (as might be expected from Shirley Jackson).

The Road concerns a small, insular, and prejudicial community, and the third-person narration migrates from the points of view of several of the characters (each of whom is introduced, along with their other family members, in the first chapter in order of their house's appearance in the neighborhood. Of course the houses are also introduced in all of their quirky style details). The characters of the story are all generally terrible people (or at least unappealing, though not as terribly unappealing as, say, Flannery O'Connor's characters), and there's a vague, forboding sense that something awful is going to happen at the end of the book (something awful does happen, and the townspeople's resolution is even more awful).

Hangasman is about a young woman away at her first year of college, during which her isolation leads her to conjure up a friend who—it's unclear from the book—may be a piece of herself, an imaginary friend, or a supernatural being. The book casts a jaundiced eye on the small, private liberal arts college (which isn't something I wanted to read with my firstborn about to go off to a small, private liberal arts college), but the character finds redemption in the end.

Then I had to extract myself from my Shirley Jackson deep dive in order to read for book clubs (and because of the aforementioned library-imposed time limit). 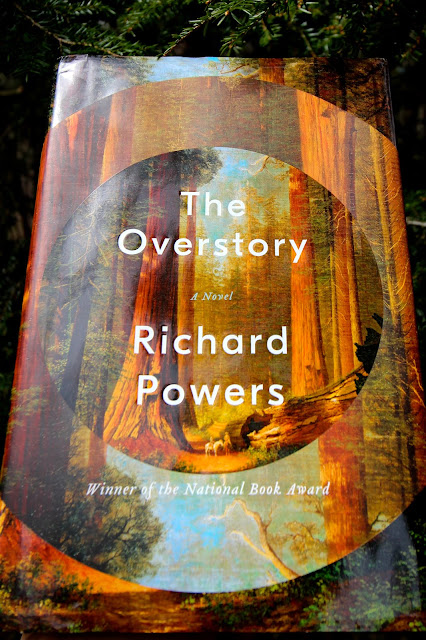 The Overstory by Richard Powers is a book I received from my mother-in-law for Christmas and only somewhat coincidentally the book  was chosen by my naturalists' book club for this quarter.

It's a very long book, a tome you might say, and it's hard to read, not in the Shakespeare way, but because it's so heart-wrenching.

It begins with a long (long, long) introduction to the multitudes of primary characters. Each of these was an interesting self-contained story, but 200 pages or so is a long time to hold on waiting to find out where all this is going (it reminded me of Victorian novels in that respect). And then it started to get going, and the characters' lives began to intertwine, and then things got very intense in the middle, and I had to put it down every few pages because I knew what was coming and I didn't want it to happen. My anxiety related not so much to the fate of the human characters, but to the trees, which play a central role in the book as living, breathing, fascinating characters in their own right.

Half my book club gave up on the book partway through because it struck them as too odd, and I agree that it is odd. The characters are all over the place, in terms of their traits, their histories, their behaviors, and the structure takes a lot of stick-to-it-iveness to get to the end, but it is a gorgeously written book, with fascinating insight and knowledge into trees, and it will wake you up if you've been feeling a little passive, a little resigned about the state and the future of our world.

May, the first half
I never even got a chance to take a picture of May's book because I had to return it to the library right away after I finished it (photographing books requires planning ahead in order to take the picture when I'm home during daylight hours), which is too bad, because it has a lovely cover (that doesn't have much to do with what goes on in the story). The book was the novel Gingerbread by Helen Oyeyemi, and I read it as part of an impromptu book club with two of my friends. I'm always a million years behind the rest of the world's reading habits, but I feel quite au courant having read this new release while it's still being reviewed (and not that favorably). It is a decidedly strange book. More so than all three of the pervious volumes put together. It's part fairytale, part fever dream. Most of the time I was thinking, "What is this book even about?" But I liked the characters (the ones I could keep track of, anyway). I wanted to know where they had come from and where they were going (though I don't think I ever figured either out). And I luxuriated in Oyeyemi's gorgeous sentences and descriptions. And I loved that it made me reset my default image of characters, and just plain think and wonder (even if I was wondering what is this book even about?).

P.S. I'm planning to breathe new life into both my blog and newsletter, aiming for one of each per week. Later this week I'll send out a new, somewhat slimmed down newsletter. If you're not already on the receiving end, you can sign up here.
Posted by Andrea at 4:53 PM 1 comment: