C and I started our house when I was pregnant with M, and at the time we didn't expect to stay here more than five years, let alone have twins four years later. So we only planned one bedroom. This worked fine for several years, since all the kids preferred sleeping in our bed anyway. But eventually things got tight. Over the years, we've adjusted the furniture to make use of the space, starting with bunk beds with a double on bottom, that the twins shared, later adding a loft bed for Z when he and E were ready for their own space. But as the boys continued to grow, the room has shrank, and M has been agitating for his own space, so for the last several months, C has been working to transform a corner of our basement into a bedroom.

When last we saw the chosen space, I'd transformed it into the Lego corner, but over time it became the dumping ground for whatever toys and junk no one wanted to deal with otherwise. It took a lot of transporting of stuff to the barn (yes, I know, not an ideal decluttering method, but this was C and M's project and I didn't have the time or inclinaiton to sort and find new homes for the stuff). A lot of weekends later, the corner was transformed into this: 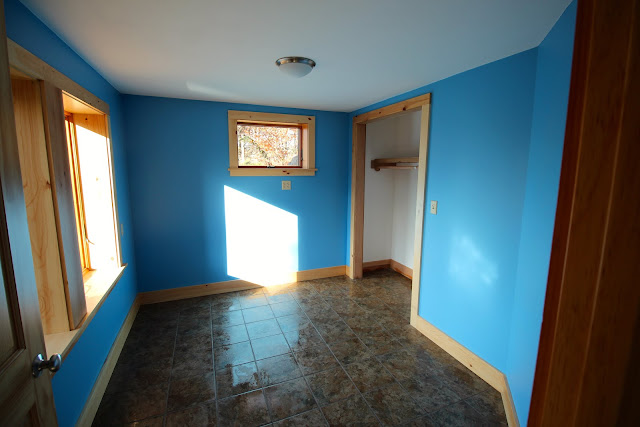 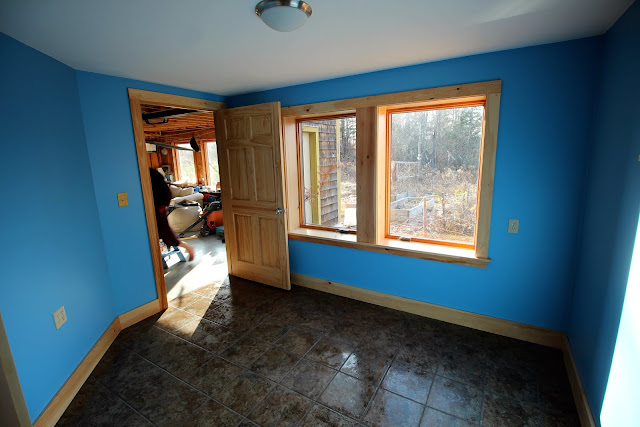 It's so bright and sunny, not to mention fresh and clean, that I wondered why we didn't make a room here a lot sooner—for me. Wouldn't it make a nice writing studio?

But I'm a nice mom and didn't steal the room for M, but rather moved his furniture for him while he was at work. The room's cozy, just enough room for bed, dresser, desk, but it's a room of his own, and it's good preparation for dorm life. 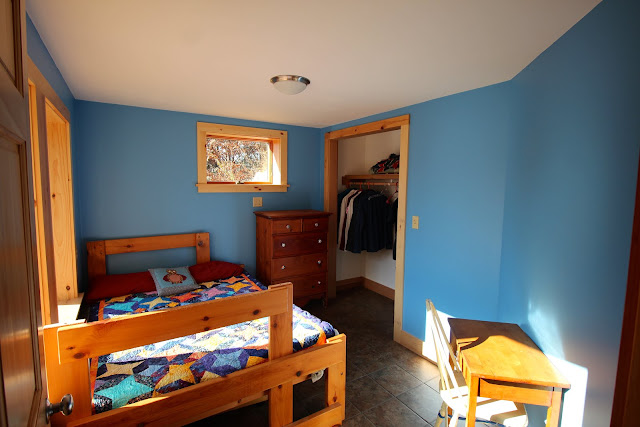 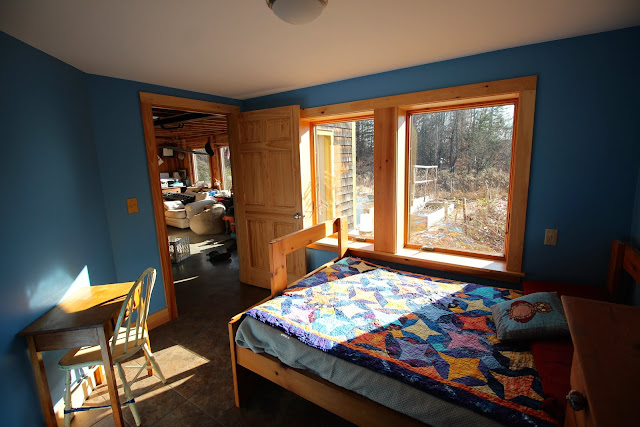 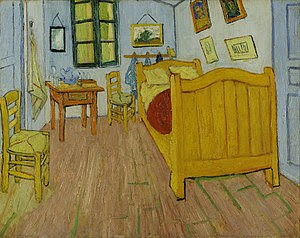 I guess there are worse places to sleep than Van Gogh's bedroom. The rest of the basement still looks a lot like the first photo in this post (inexplicably, cleaning and organizing a space does not make it permanently clean and organzied).

And here's the lad himself, in one of our many attempts at a senior photo. 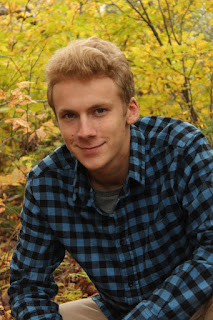 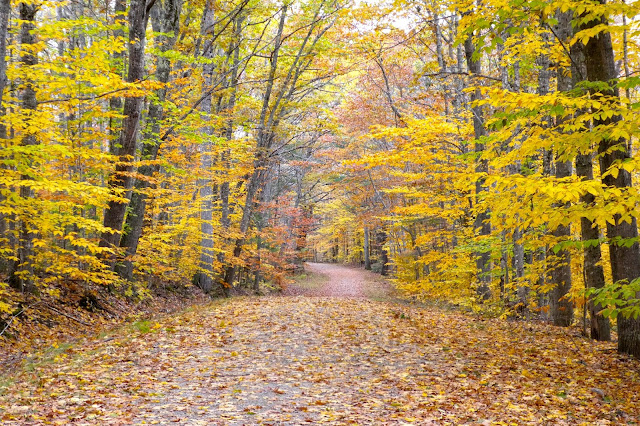 I was astonished when, scanning through my email this afternoon, I opened a message from the Sunlight Press, announcing they had nominated my essay, "The Sparrow's Song," for a Pushcart Prize. This would be thrilling news to receive at any time, but at this moment, when I'm reconciling my identity as a writer with this new reality as a 9-5 worker bee, it's an especially welcome surprise.
Posted by Andrea at 11:02 AM 1 comment:

A roundup of books I read over the last month. You can see past lists here: 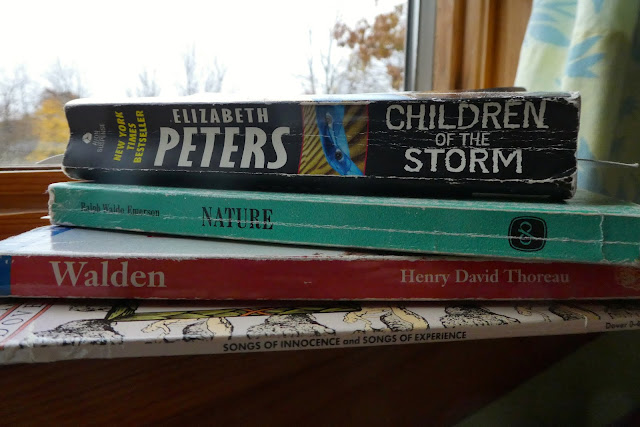 Well, I'm making up for my very frivilous book reading all summer with some serious reads this fall. (And much shorter lists, you'll note.)

Poetry. I won't say I resumed my poetry in the morning routine, since it didn't last longer than a week or two—as much time as it took to read William Blake's Songs of Innocence and Songs of Experience. A few Romantic poets were cited in the series of environmental literature lectures I've been so very slowly watching, and this was the only one I happened to have on my shelf. (Wordsworth and Shelley, I'll be looking for you at used bookstores.) What do I have to say about it? Lots of sort of lion-and-lamb religious sentimentality, especially in Innocence. A little more clear-eyed view of the inequalities of the Victorian world in Experience (little chimney sweeps feature regularly). As I've said before, I don't know enough about poetry to give a good critique, and while I didn't hate it, I can't say I feel compelled to pick it up and read it again anytime soon, though I would love to see some of Blake's original illustrated versions of the poems.

Nonfiction. Many years (we won't say how many) after first learning about Transcendentalism in high school, I finally read Nature by Ralph Waldo Emerson. I now understand why everyone talks about Emerson but no one ever actually suggests you read him. Because all through this book? He didn't really say much of anything. Lots of vague generalizations. There are some nice aphorisms, like "But if a man were to be alone, let him look at the stars." I have no idea what that means, but it sounds nice and would look good on one of those Craftsman style fireplace tiles. Maybe part of my problem with the book is that whoever owned my copy before me underlined and annotated the text, by turns rapturously agreeing and vehemently arguing with Emerson. She (I say "she" because of the handwriting) obviously came at the text from conservative Christian point of view and got very bent out of shape when Emerson personified Nature, as a sentient entity ("humanism!!!" she shouted in the margins). Maybe if I hadn't been so distracted and entertained by her comments, I'd have paid more attention to what Emerson had to say. Then again, maybe I wouldn't.

I read Nature as a prelude to that most famous book by Emerson's friend, disciple, and squatter. I will confess here to having never read Walden before. I've started it many times, but never gotten much beyond the initial chapters of nickel-and-diming the building of the cabin and the cost of buying beans. I just never felt it was relevant to my life, and it seemed like a lot of senseless rambling. This time, however, the book struck a chord with me. Maybe because I was coming to the end of my own personal Walden, two years plus a bit (Thoreau spent two years at the pond, while writing the book to follow the seasons of a single year) at home, spending time reading, writing, and appreciating nature. I wasn't—and never will be—as free of responsibility as old Hank, but it was perhaps as close as I'll get to the simple life. It was very interesting to read Thoreau's musings on work—that the more you work the more stuff (and food) you need, or think you need, so then you have to work more to maintain those things and get more things—as I prepared to return to the working life.

"I say, beware of all enterprises that require new clothes, and rather not a new wearer of clothes," he writes. Oh, dear, becasue my year of now shopping, which had not been going all that well anyway, went all to hell with the prospect of a new job and nothing to wear to it.

I also thought his musings on the content of newspapers as really just gossip very relevant to social media. And I was amused by his taking of "homeopathic doses" of gossip by walking into town each afternoon. (The occasional dip into Facebook can serve the same purpose, no?)

And, of course his descriptions of the natural world are just outstanding. There's a passage on owls that particularly stood out for me. It's too long to quote here, but I loved the line: "I rejoice that there are owls. Let them do the idiotic and maniacal hooting for men." I wonder what my anonymous annotator of Emerson would have to say about Thoreau? (Humanist!!! Pagan!!!).

Edited: A comment I got on FB informed me that I wasn't clear in this description about whether I'd enjoyed reading Walden. Here's how I responded:


"I did find it enjoyable. This time. A dozen other times I wanted to throw it across the room. HDT struck me as boring, rambling, pompous, and entitled. But this time he was funny, self-deprecating, and self-contradictory (an unreliable narrator in the most endearing way) and honestly rapturous about the natural world. I don’t know what changed, but I think it was me not him."

Read-Aloud. Finally, the boys and I are nearing the end of our Amelia Peabody series, finishing up Children of the Storm in October. This one took us longer than usual—I think the start of the school year knocked us off our game—and it had a kind of complex plot, but it's a good one with lots of thrilling moments and twists. Having reread all these books at least twice over the past five years and reading them again now, I can see clues are planted along the way, all of which I of course missed the first time (or two or three) that I read the books.
Posted by Andrea at 3:20 AM No comments:

It's been a fairly dry year with regard to publication around here, but two pieces that have been long in coming are set to be published over the coming months. 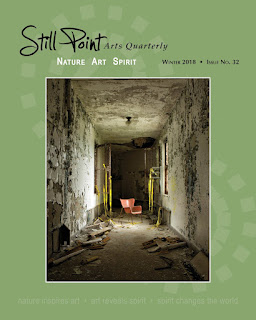 First, an essay about life, death, autumn leaves, and Andy Golsworthy will come out in the Winter edition of Still Point Arts Quarterly on December 1. You can go here for a free digital subscription or to order a print copy.

Second, I have a short story, which I wrote way back in MFA days, and which has gone through many, many iterations and revisions, about love and life and fear and hiking in the desert, will come out as part of the collection This Side of the Divide: Stories of the American West on February 12. 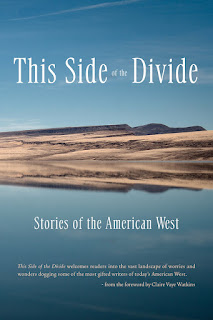 You can go here to read more about the collection, and here to pre-order a copy.

I'm thrilled to see both of these pieces in print, and their imminent publication has reinvigorated efforts to get my last few orphan short stories and essays (those which haven't been back-burnered indefinitely, that is), out into the world.
Posted by Andrea at 2:44 AM 3 comments:

When you have kids, you pay a lot of attention to firsts—the first tooth, the first word, the first step, all breathlessly anticipated, documented, and recorded. But lasts, those we often don't notice till long after the fact. When was the last time he fell asleep on my lap, or said "skabetti," or was small enough I could carry him? All lost to the mists of time. 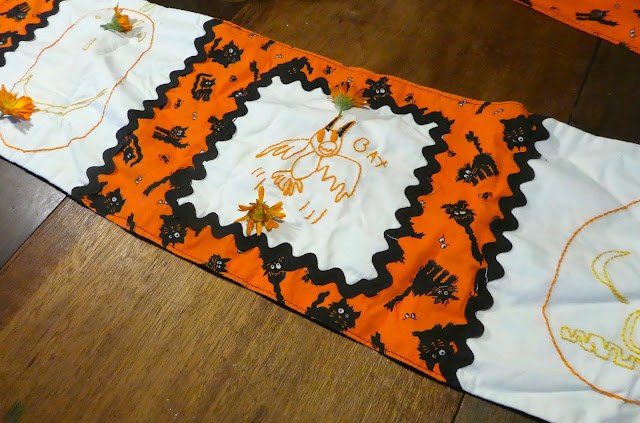 Last year, as we were making our annual Halloween rounds of the neighborhood, I admit to thinking, "Thank goodness we're almost done!" Because kids can't go on trick-or-treating forever. Eventually they go away to college, right? (I remember thinking the same thing about breastfeeding and the family bed.)

So I surprised myself this year, when E and Z expressed ambivalence about the old trick-or-treat routine. Wait, I didn't know last year was going to be our last Halloween. And so, despite my own ambivalence, I coaxed them into Halloweening one last time.

E and I went out Tuesday afternoon and bought one of the last pumpkins at the apple orchard, which C helpt them carve into a great big eye (making use of a natural orifice in the pumpkin itself). 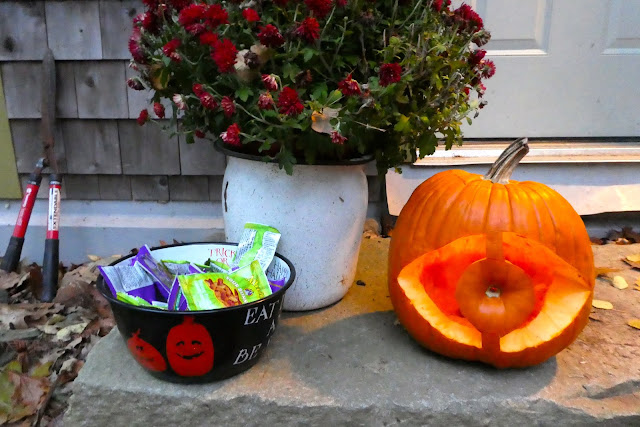 We had our usual jack-o-lantern bagel melts for dinner, which is as fancy as I get for Halloween vittles. 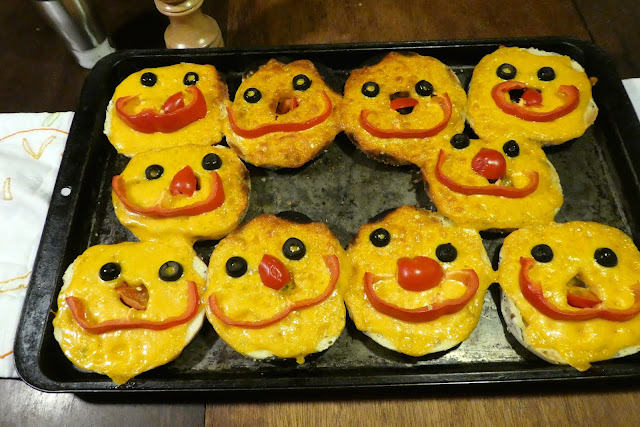 E and Z dug some old costume parts out of the dress-up bin. 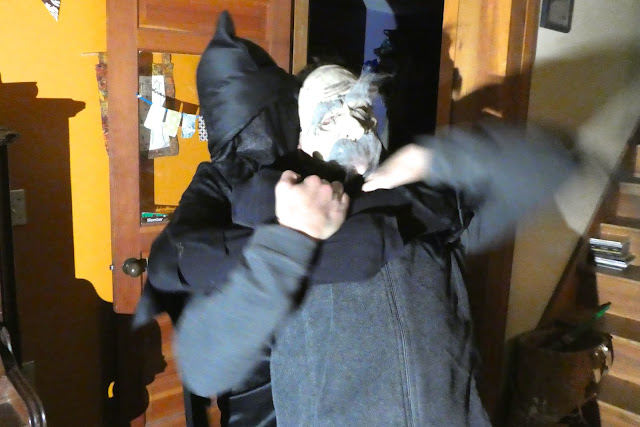 And even I dressed up for the occasion. 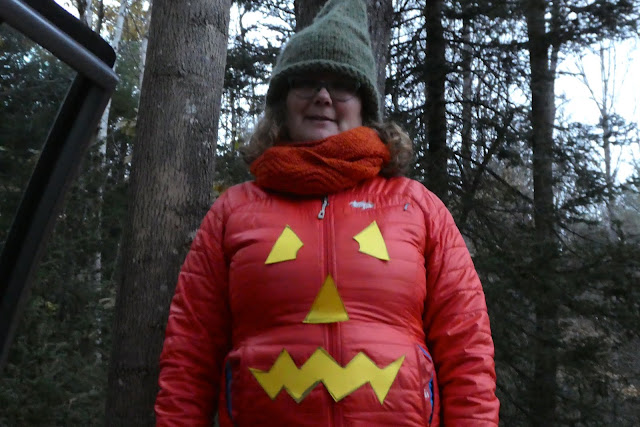 We skipped the hay wagon, since it looked like rain, and our usual driver seemed less than enthusiastic, but we hit all the usual haunts, and spent the usual 10-20 minutes at each one, catching up with the whole neighborhood where C grew up. 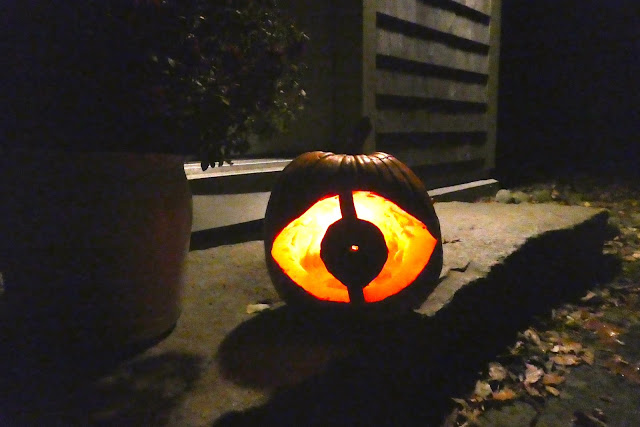 It may not have been our last Halloween—who knows what the kids will want to do next year—but if it was, at least it was documented and recorded.