This is my seventh--and last--season with a kit on the high school cross-country running team, so in classic last-minute-Andrea fashion, I decided to take this opportunity to knit a running hat for Z. 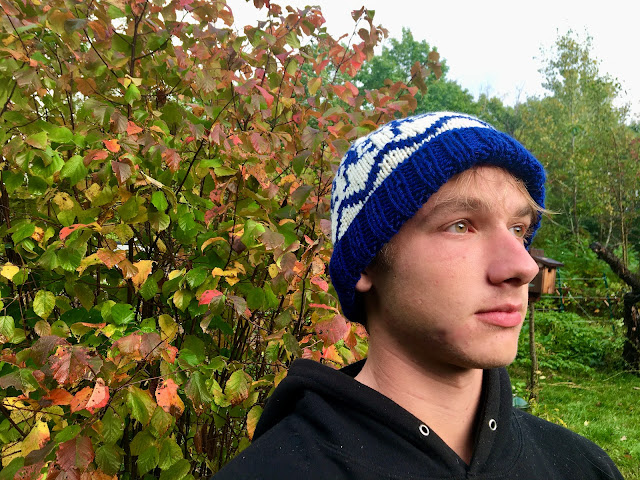 I actually got the idea at the last meet of last year's season, when I noticed the kids from the more well-resourced/well-organized schools wore mass-produced acrylic beanies with little runners sprinting around their crowns. I'll take any excuse to do a little two-color knitting, and there happened to be a fabulous yarn store in the very town where the meet was held. I just didn't get around to starting on it until after this year's season got started. This wasn't a huge problem, since the first meets of the year are usually swelteringly hot, and it's not till the last few that the cold breath or winter breathes down the runners' backs. 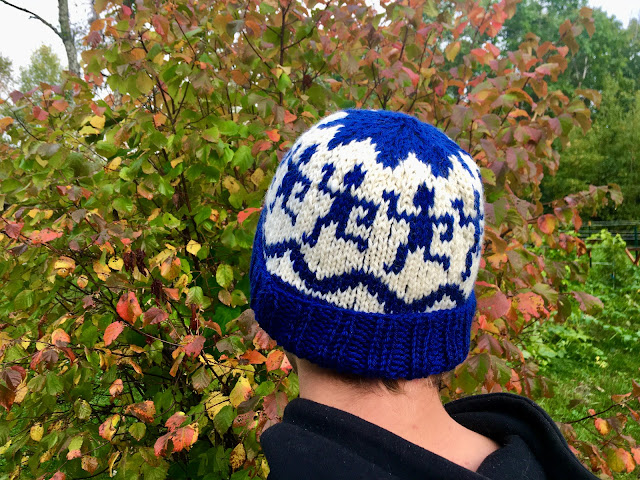 I couldn't find the exact pattern I wanted, so I made this one up, using a couple of other patterns as the basis and a sheet of graph paper and markers to work out the little running guys. You can see my pattern on Ravelry. They ended up with Ancient Egyptian-style hands, which is a detail I might leave out if I were to do it again. You can also see that every once in a while, where I carried my blue thread, it shows through the white. I'm sure there's a technique for avoiding that, and I'm sure I'll figure that out before I do more color work.
Now the only question: Will Z actually wear the hat? There are only two or three meets left. But there's plenty of cold winter weather ahead, so the hat might get some use even if it never puts in an appearance at a meet.
Posted by Andrea at 11:32 AM No comments: 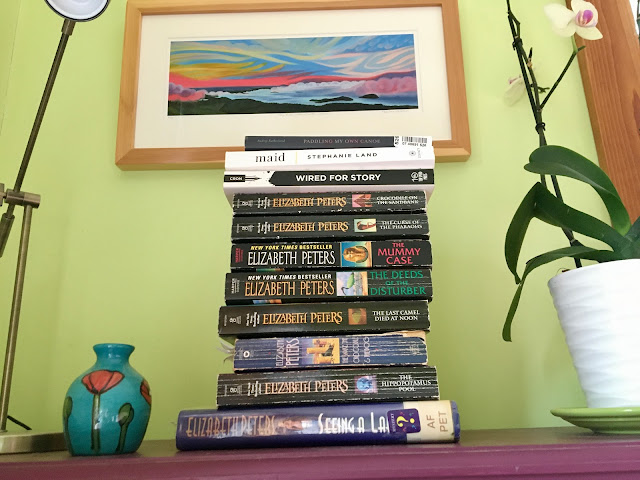 We've got a tall stack for August. I've always considered summer prime reading season, going all the way back to my bookmobile days and continuing now in my hammock days.

I started the month reading Paddling My Own Canoe by Audrey Sutherland (which you can barely see way up there at the top of the pile) while C and I were camping on the coast. In it, Sutherland relates several trips by water to a remote part of a Hawaiian Island, the first of which she made by swimming  around the island and towing her gear in a weather balloon wrapped in a shower curtain. Over subsequent trips she improved on her gear--replacing the bundle with a styrofoam box and eventually using an inflatable canoe. On these trips, she gets dashed against rocks, has run-ins with wild boars (though not sharks), and other near-death experiences. I mean, the crazy adventures are enough to make this book enjoyable, but her narration style is so utterly guileless and charming, I was with her all the way on these madcap adventures.

The boys all went away for a weekend early in the month and I binge-watched Maid while they were gone, then had to go out and pick up the book by Stephanie Land on which it was based. (I have no problem watching move before reading book.) I think both the show and the book show really well what an impossible position we place poor people in this country, with no way to climb out.

For my book coach training, I read Wired for Story by Lisa Cron, and it SO good. I really wish I'd read it early in my writing journey, when I was actively trying to figure out (and write) fiction. Sadly, I've put writing fiction on pause (for now), but this book makes so clear so many aspects of what a story requires, and why. I underlined a LOT, and I rarely deface books.

After finishing Wired for Story, I decided to read a book I'm very familiar with, so I could sit back as a detached observer and take note of the various story elements and see them in action, so I picked up the first of the Amelia Peabody series, Crocodile on the Sandbank, by Elizabeth Peters. This is a series I read all the way through in 2017, and again over the course of 2017-2018, aloud to my kids, on top of having read most of the books (that had been published at that time) once or twice in my 20s and again when M was a baby and as they came out over the years and probably another time or two in between. Meaning, I've read this book at minimum five or six times--probably more than that. I knew exactly what would happen, who the bad guy(s) would be, what they would try to do and why, and who would end up betrothed to whom at the end. It should have been easy to take a clinical approach to dissecting how it was put together. But of course I got sucked into the story, and, like a chain smoker, as soon as I turned the last page, I picked up the next in the series and the next. In total, I read the first nine in the series (not pictured: The Lion in the Valley, because E is reading it, having also read the first three. I'm trying to not get too excited, but that kid hasn't voluntarily picked up a book since he was about 12, so I kind of want to jump up and down squealing). And of course the binge has continued into this month (despite my determination to focus on my writing projects and eschew distraction). At least all this reading has cut down on my TV watching time.

My brother and his wife expecting a baby girl gave me an opportunity to try my hand at making tiny embroidered booties of the type I've always admired made by Melissa Wastney at Tiny Happy. (I have made these and these little baby shoes out of other fabric , but something about that vintage embroidery that makes me squeal.)

I started with this shirt, which, despite my not being a fan of pink, was my favorite summer top for several years, until I wore holes in the arm seams. I hung onto it, though, thinking I could repurpose the soft linen in some way. It's not exactly vintage but it is embroidered. 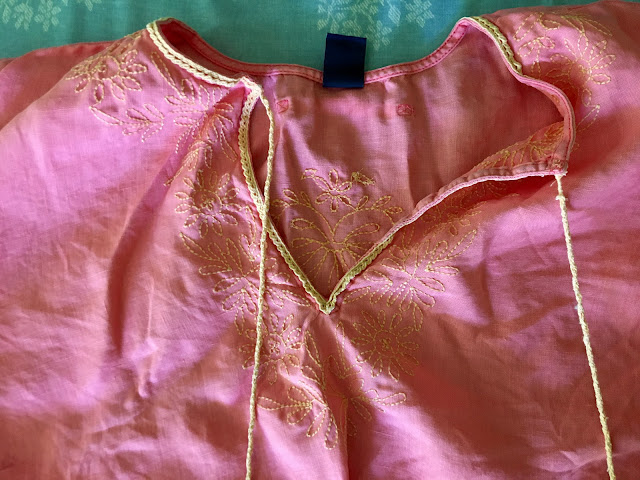 I cut strategically around the embroidery, found a fabric that complemented both the pink and the peachy stitching in my stash, and put a pair of reversible baby shoes together (using a tutorial that I had printed out many years ago but which, alas, is no longer online). 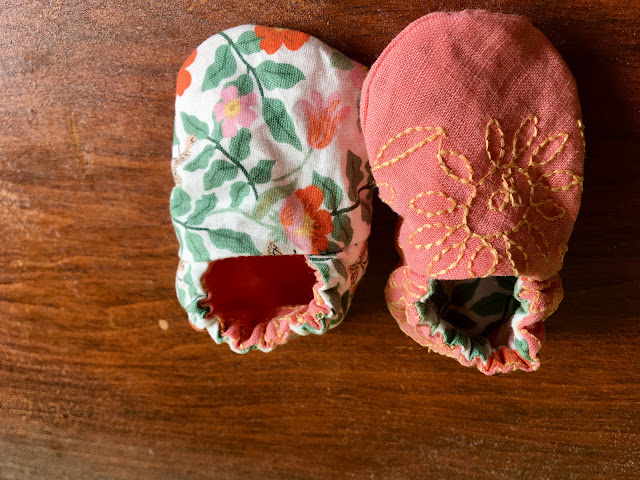 They came out so freaking cute, I must say (I don't have anything to show scale in the photo, but let me tell you they're tiny!) 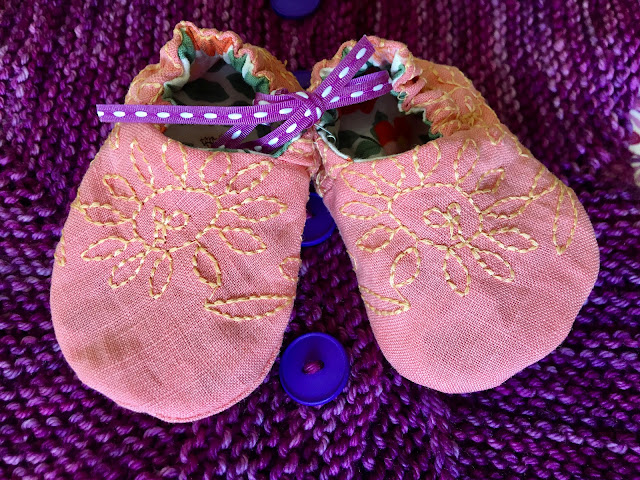 They don't exactly match the sweater I made for the same baby, but I think that's okay, because the shoes will fit a newborn and the sweater looks like it's more for a 3-month-old or bigger baby. 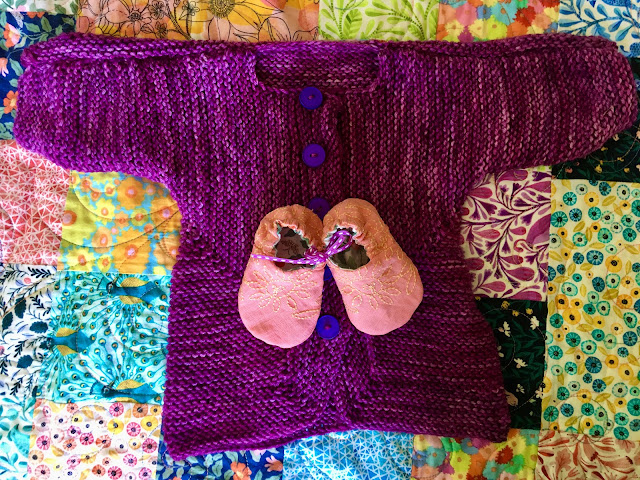 Posted by Andrea at 7:59 AM No comments:

Uphill Both Ways has been out in the world six months as of today! Join me in a hip-hip-hooray and a many happy returns on the day for this little book. 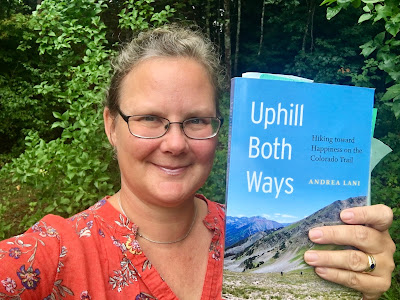 If you want to celebrate with me in person, I have two events happening this month:
Saturday, September 10th, 10 a.m., at Lithgow Library in Augusta, with Jennifer Dupree, author of The Miraculous Flight of Owen Leach. 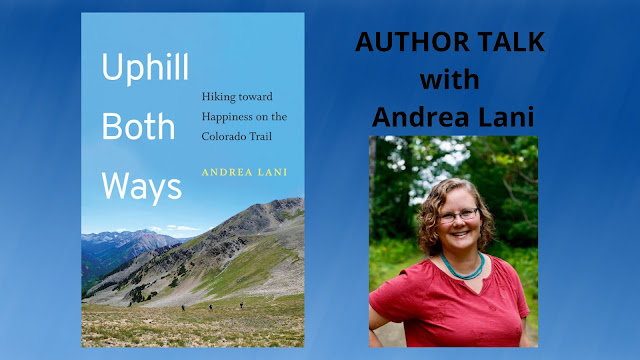 I also expect a couple of podcast episodes to drop this month, and I'll keep you posted on those.
Earlier this week, I received my first royalty statement (and check!) for the book. It's sold nearly 500 copies of paper books and more than 20 electronic. I read somewhere that most books sell fewer than 250 copies in the first year, so that's good news, I think. I'd like to double that number for the second six months. Here are some ways you can help make that happen:
Posted by Andrea at 7:32 AM No comments: