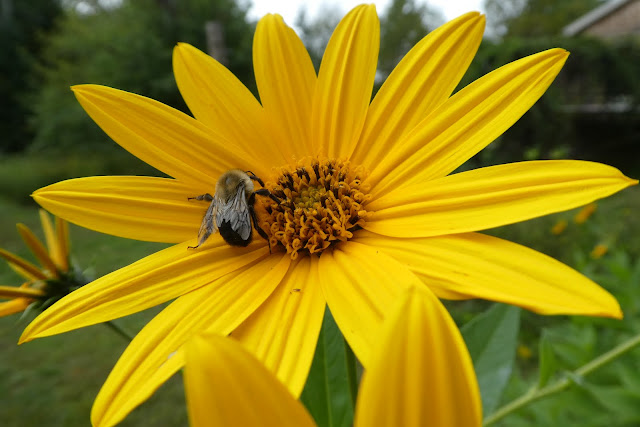 After a very long hiatus, I sent out a new newsletter yesterday. If you didn't get it in your inbox, you can see it here (I think some email services may be blocking it, because I didn't even get my copy). If you don't already have a subscription, you can subscribe here. If you've already subscribed but didn't receive your copy, check your spam folder and "promotions" tab. And if you try to subscribe, but it doesn't work, send me a message using the blog contact form at right and I'll sign you up manually!
Posted by Andrea at 6:54 AM No comments:

Email ThisBlogThis!Share to TwitterShare to FacebookShare to Pinterest
Labels: newsletter 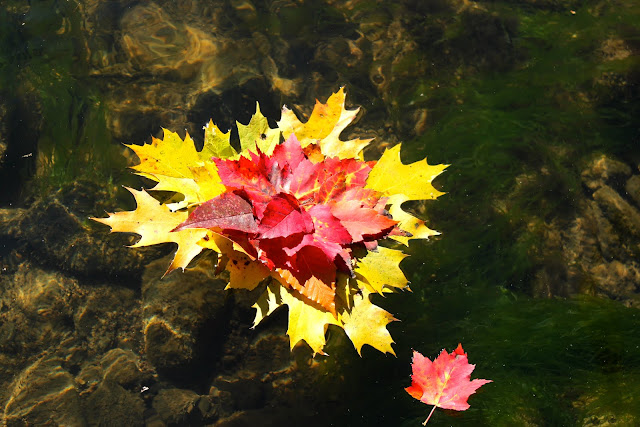 I'll be teaching a three-day nature journaling workshop at Little Lyford Lodge in Maine's beautiful wild woods near Greenville on October 5-7 for the Appalachian Mountain Club. If you've ever wanted to fully immerse yourself in observing, drawing, writing about, and just genearlly soaking up the natural world, this is the weekend for you, and I'd love to have you join me.

More information, including a workshop schedule, and registration here.
Posted by Andrea at 5:35 AM No comments: 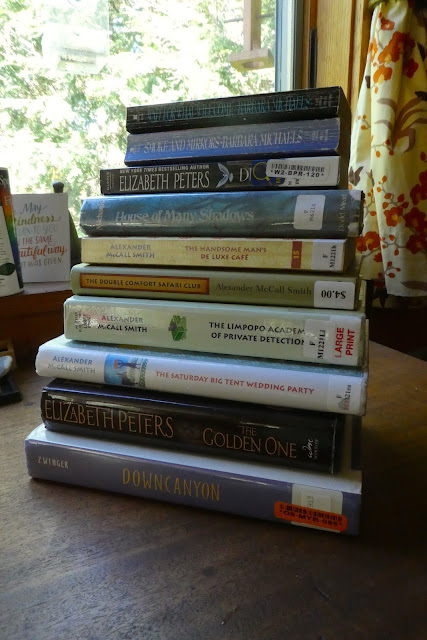 I'm a little embarrassed by August's book stack. I mean, it's so tall, it necessitated a portrait-oriented photo. And two books didn't even make it to the photo shoot. AND they're almost all beach books. But it was August, and what is August for, if not to read beach books at the beach (and in the tent, and on the hammock, and from the deck?).

Nonfiction. I'll start with the one serious book in the stack: Downcanyon, by Ann Zwinger. This, like Wind in Rock, which I talked about in June's list, is on dock for my next naturalists' book club meeting. I've read a lot by Zwinger in the last few years, and I think Downcanyon is her most beautiful writing. It's a year-round view of the Grand Canyon. She made trips there in all seasons, some by raft, others by research vessel, others on foot. How terrific of a life would that be? And the writing is just lovely, with the right balance of history and natural history with just a touch of the personal. (My book club wanted a book that had more nature than personal narrative, and all of Zwinger's books fit that bill. Though she doesn't completely excise the "i" or "me" from "memoir," the writing is first and foremost about what she observes and researches.) Zwinger, an art historian by education and illustrator of all her own books, has a truly artistic eye for the landscape, and a vocabulary to go with it, and paints vivid word pictures of all there is to see in the grandest of canyons.

Fiction. Oh dear. Did I really read that many books? I think I devoured three on our 5-day camping trip alone. Four are from Alexander McCall Smith's The Ladies' No. 1 Detective Agency series. I've read these off-and-on over the years, but had fallen behind recently. (How does that man write so many books? He's published 60-odd books in the last 20 years, since the first Ladies' No. 1 book came out. If only I could have a fraction of that creativity, imagination, energy, and je ne sais quoi.) Anyway, I picked up a couple volumes at the library booksale earlier this summer, and after I read them, I picked up a couple more at the library. They're nice, quiet reads, full of gentle wisdom and mild humor, and they make you feel like all is right in the world, as long as Precious Ramotswe is on the case.

I also read five more Elizabeth Peters/Barbara Michaels books. I'm not even going to list them here. I didn't even get one in the photo (it was buried on my nightstand and I'd forgotten about it until I dusted some time later). I'm starting to fear for my mental health. But, I am happy to report, I'm slowing down on the obsession. I've mostly exhausted the supply from used book purveyors in a two-hour radius of my home, and I'd say I was starting to exhaust my capacity for modern gothic, except that I also read this: 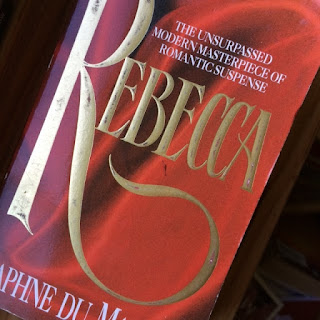 Rebecca, by Daphne DuMaurier. I remember as a kid seeing this book on my mother's bookshelves, and probably on the shelves of other people's mothers. I'd always assumed it was an up-scale romance. Boy was I wrong. It's described on the on the front cover as "romantic suspense," but I wouldn't consider it terribly romantic (almost anti-romantic). However it is suspensful, from the very first sentence (which I can't quote exactly, since I gave my copy to a friend, but which goes something like, "Last night I dreamed I was back at Manderley…"). You know something terrible is going to happen. And that it has something to do with the mysterious, late wife of Mr. de Winter. And when you find out what does happen, you are forced, against your own good sense and moral compass, to root for the perpetrator to get away with it. It's a book that messes with your head. And it's a book of lush, lingering passages of description, and a narrator whose fertile imagination fills the pages with daydreams about what might have happened, what is going to happen, what may be happening right now, elsewhere. It's a mesmerising page-turner if I ever read one.


Read-Aloud. E, Z, and I are still working our way through Elizabeth Peters's Amelia Peabody series, last month reading The Golden One. Not much more to say about these books, which I'm reading for at least the fourth time (so they must be good), except that it's pretty darn nice when your eighth-graders still want you to read to them (even if part of their motivation may be to get out of reading to themselves).
Posted by Andrea at 7:15 AM No comments:

The very first thing I did the first time I came to Maine was go on a five-day sea kayaking trip. I went on another a year later and took kayaks out for shorter adventures during my two years in college on the coast. I bought a used ("tupperware") boat many long years ago, but only had it out on the ocean once or twice before I had kids and my kayak became a dust- and spider-collecter. I've gone out sea kayaking maybe twice since we had kids (one of those trips is chronicled here). And I didn't know how much I missed paddling, that salty film on my skin, even lugging heavy boats over mudflats. 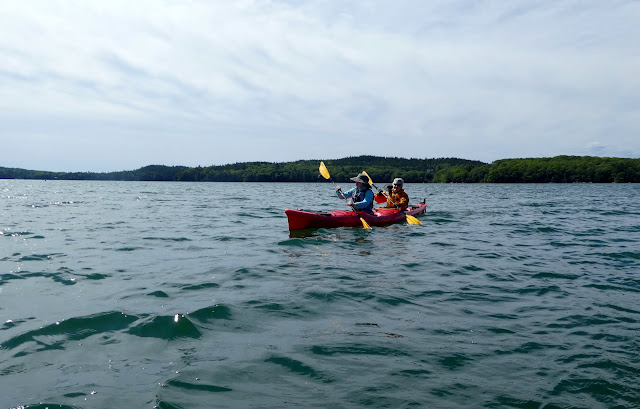 Then I had the great good fortune to have been invited to teach a nature journaling workshop for Northstar Adventures and I spent last Saturday paddling with a small group of people in beautiful Penobscot Bay, from Castine Harbor to a pair of islands in Brooksville. 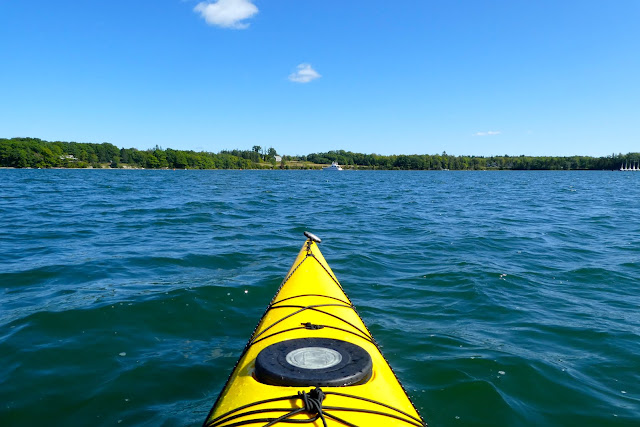 There we explored the shore, did a variety of writing and drawing exercises, and ate a delicious lunch (some of our group even took a swim in the cold water). 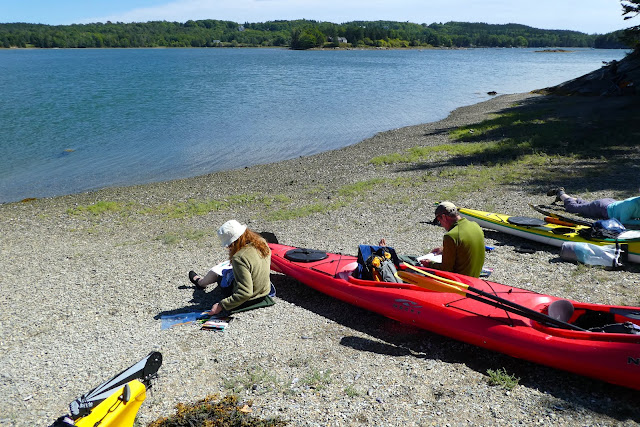 It was a pretty divine day and I was so happy to be back out on salt water (and wondering why the hell we live in Maine but inland). With each workshop, freelance gig, and piece of writing sold, I feel one tiny step closer to my career goals (which I once articulated as, "Go canoeing and write about it.") Yet, as we speak, I'm sending out resumes, because the demands of three teenage kids (all of whom have stomachs, feet, and teeth, three expensive body parts), a house whose appliances and fixtures are all exactly 16 years old and therefore all meeting their demise at once, and two 20+-year-old cars mean that the necessity for "real job" is becoming unavoidable. Which means that going canoeing and writing about it will once again become a weekend/evening/lunchbreak/interstitial pursuit. I won't say I'm not sad about that.

But in the meantime, if you want to join me for a THREE DAY!!! nature journaling workshop, I'll be teaching at Little Lyford Lodge in the Greenville area for the Appalachian Mountain Club. See here for details.
Posted by Andrea at 7:13 AM No comments:

I thought summer wouldn't go by so fast this year, since we didn't take a three- (or eight-) week road (or hiking) trip in the middle of it, but, if anything, I think it went faster. After the first day of "Hey Mom, hey Mom, hey Mom," I knew I had to sign E and Z up for a LOT of camps, which I did, which was nice for me (and probably for them, too, but they won't admit it), but it also resulted in a lot of the same kind of rushing around to get places on time that characterizes the rest of the year and is, I believe, a huge contributor to making time fly by. But, this summer was not ALL rushing around. Since my last, 4th-of-July update, we took a weekend trip to Vermont (for a funeral and some college tours, but also a bit of sight-seeing and hanging out in swimming pools; I have no photo evidence of that trip, however).

We also went to the beach. 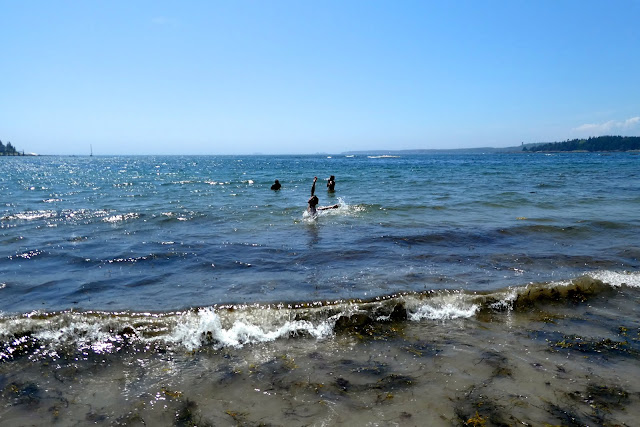 And I, without kids, did some bird-watching. 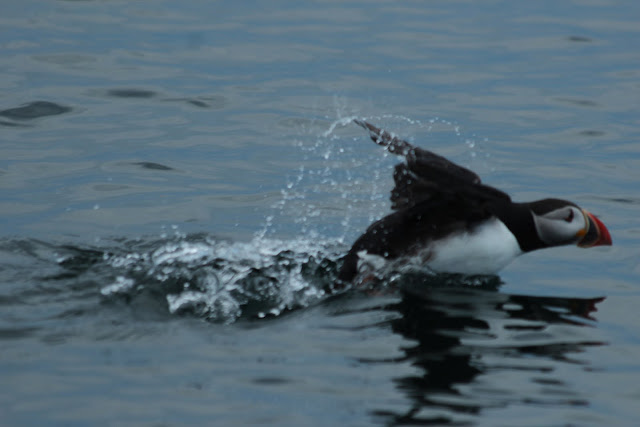 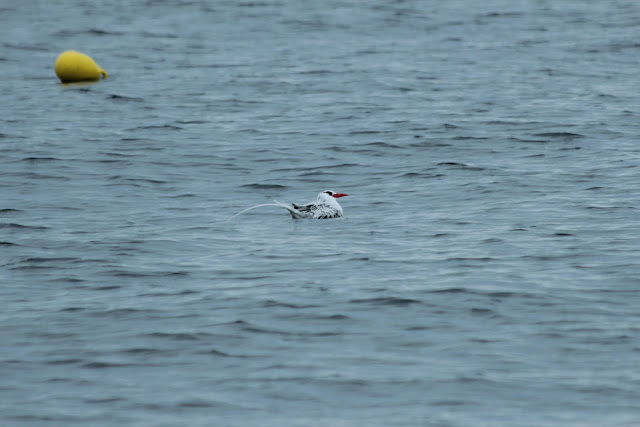 And some bonus seals. 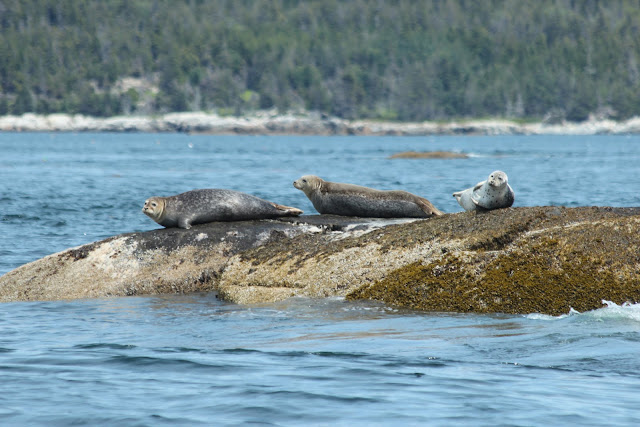 We went to the beach again. 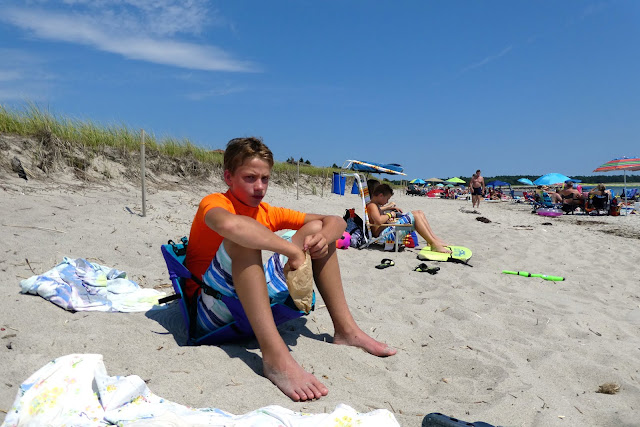 And we went on a 5-day camping trip. 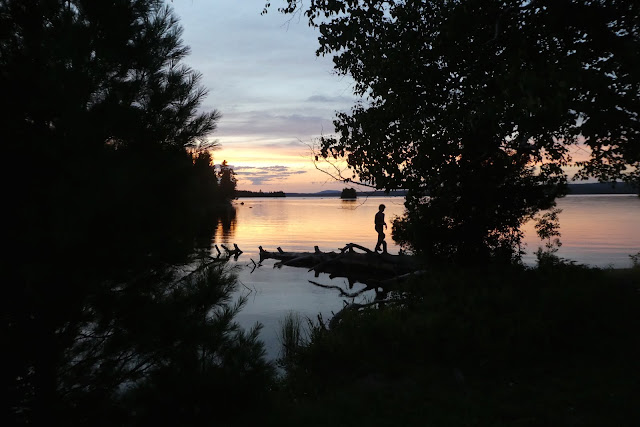 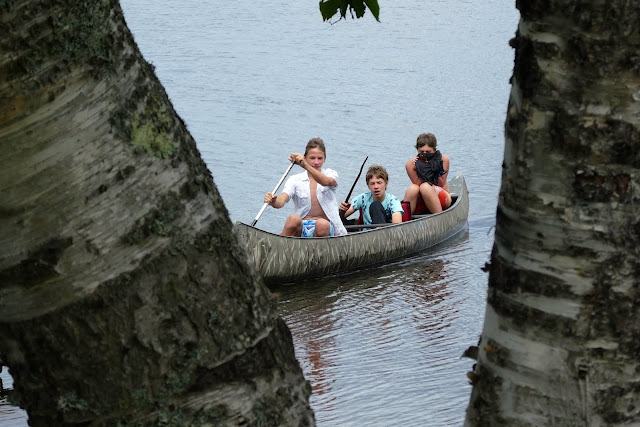 While there, we climbed a small mountain. 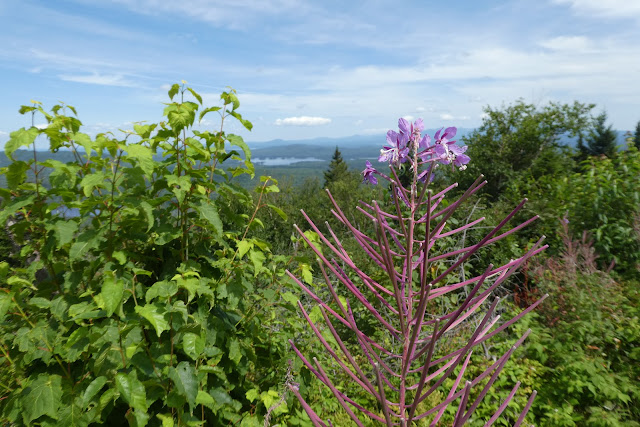 Then we went to the beach again. 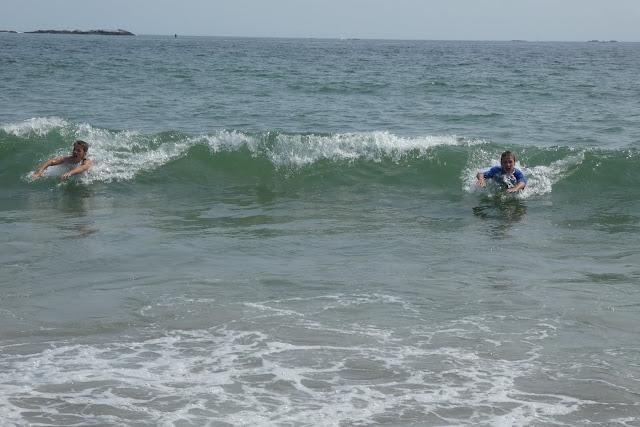 And we went hiking again. 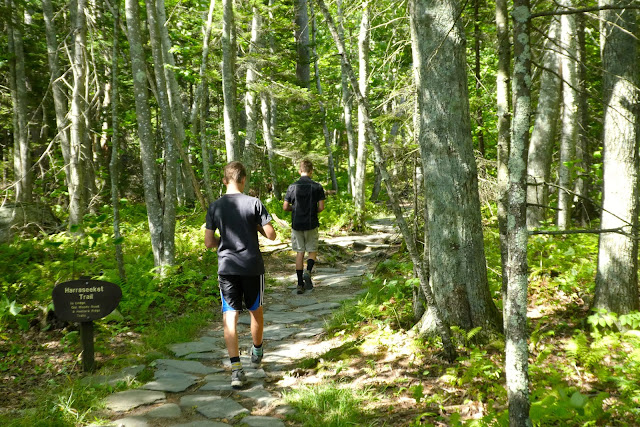 And, finally, we celebrated the nominal (though not calendrical and, this year, not even weather-wise) last day of summer by taking a gorgeous boat ride among harbors and islands and coves. 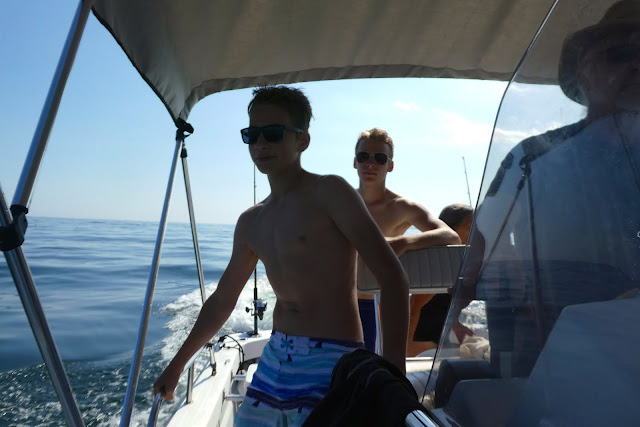 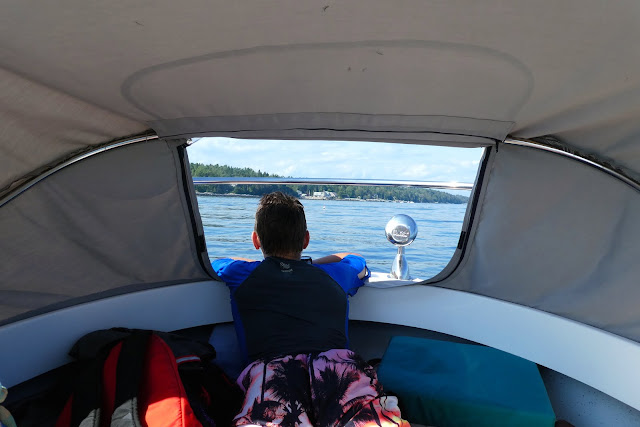 This summer may have gone by too fast, and it may not have been marked by an epic vacation, but it was still pretty darn nice.