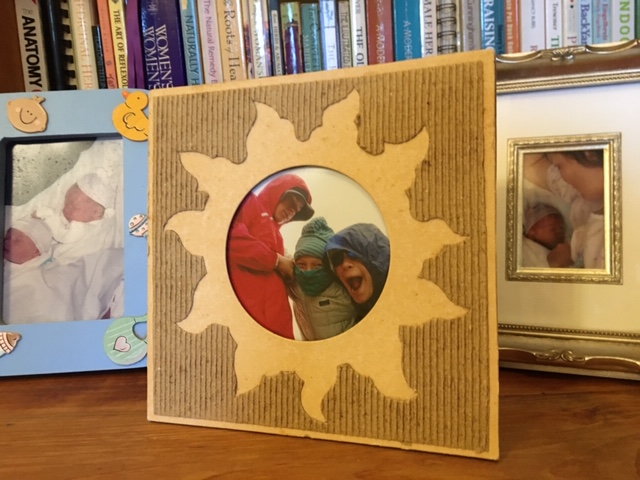 Summer is coming to a close in much the way it began—full speed ahead. While the beginning was marked by, among other things, graduations times three, the ending is speeding toward the first day of school times three. E and Z start high school the same day we drop M off for college. I've never been so relieved that he chose a school 45 minutes from home. It would be one thing to miss your kids' first day of eighth grade or sophomore year, but the first day of freshman year requires some support.

I've also gotten it into my head to spend these last few weeks of summer tearing our house apart, decluttering, rearranging, touching up. This is partly because we have guests coming to stay in a few weeks, partly because it's been a long time since I cleaned the house from top to bottom and soon I'll be back to work and won't have time, and partly to make sure M doesn't go off to college, leaving his belongings cluttering up the rest of the house.

I suspect there might be another reason. After I found out I was pregnant with twins, on a Friday in early January, in one final burst of energy before succumbing to the exhaustion caused by being inhabited by two fetus-parasites, I spent that entire weekend dismantling Christmas, cleaning, and rearranging furniture in an unconscious effort to avoid confronting the reality of the situation. Perhaps I'm cleaning the house to avoid thinking about my baby launching off into the world (even if it is only 45 minutes from home).

I'm truly excited for this next stage of life for him, but last week, when we were driving to the big-box store to do a little dorm shopping, I had a vision of his three-year-old self reaching up to stuff his gigantic lunch box into the top of his preschool cubby, and my stomach dropped. Is this really the same kid. Has so much time really gone by?

Among the dust and cobwebs and junk, housecleaning has yielded a few Easter eggs—spots where the kids wrote on the walls (and doors and floors) long past the age when such behavior is reasonable, books I forgot I had, an envelope of photos from the Colorado Trail and a cute picture frame that wasn't being used for anything else.


I've also been practicing letting go—of toys and books the kids have outgrown, of items gifted or handed down from relatives that I've never used but have kept out of a sense of obligation. I'm not going full Marie Kondo—I love my books and dishes too much to be a minimalist—but as much as I'm tempted to write a book called "Happily Messy," I'm finding that what organization gurus say is true: a clean, well-organized space is more comfortable and relaxing. So while my living room and bedroom serve as staging areas for stuff that needs to find a new home, I find a bookcase that has been dusted and sorted or a picture in a frame on a shelf, and gaze at it for a few minutes to find my inner calm.

This post went out last week to subscribers of my newsletter, along with some bonus material. You can subscribe here.
Posted by Andrea at 10:32 AM 2 comments:

A Trip to the Capital

I went on my first trip to Washington, DC when I was a senior in high school. It was my first time on a plane, my first time east of metro Denver, my first visit to a major city (surely places like Seattle, Portland, and Salt Lake didn't count?). We stayed in a hotel and rode around on tour buses with students from three other states, hitting the highlights: the Capitol, the monuments and memorials (except the Washington Monument, which was closed for maintenance), the Natural History and Air and Space Museums. We were there during the time of the first Gulf War, so the White House was closed to tours, but we had lively discussions about free speech during a time of war (you can guess which side I was on). Everything was so new, so exciting, so different, that I bought about 200 postcards and took a similar number of photos (in the days of 35 mm film). 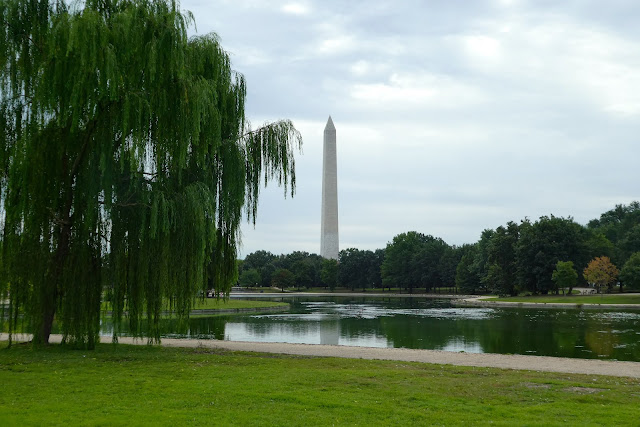 I've been back a few times for work, each time taking in a little more of the city: an Art Nouveau exhibit at one of the Smithsonians, Pakistani food in Georgetown. Once I was passing the White House during my lunch break just as they were about to close off the tour line. I hestitated, considering skipping the afternoon round of meetings, but my sense of duty took over and I went back to a long, boring meeting at EPA headquarters, about what I don't even remember, and have been kicking myself ever since. 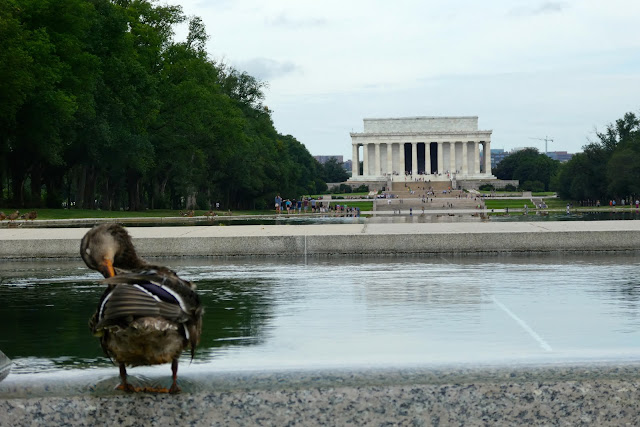 We'd planned to take the kids to visit their nation's capital for years, but never got around to it. Then this summer came and I realized it was almost too late—one kid was about to fledge into the world and who knows if he'd ever want to go on a vacation with us again. Coincidentally, C's stepbrother, who lives in DC, made a casual comment like "you should come see us sometime," and we took him up on it (be careful with those casual invites). 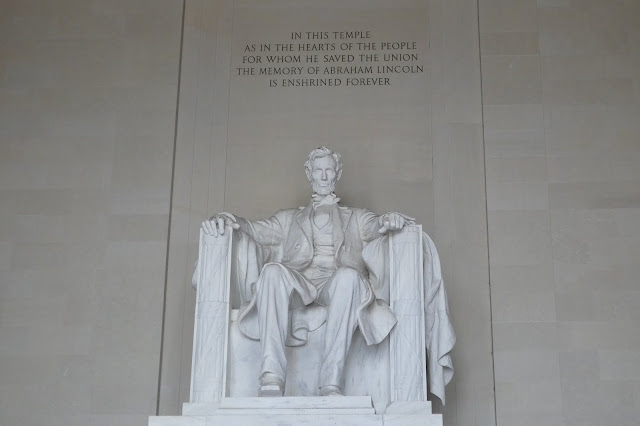 We had an amazing time. We hit the highlights: the Capitol, the monuments and memorials, including the new FDR and MLK memorials (George Washington still closed for maintenance; I'm beginning to think it's a hologram), the Natural History and Air and Space Museums, the National Archives. We did not bother looking into White House tours, but had a moment of mourning while looking at the white columns from the ellipse. We also fit in some nature (Constitution Gardens, Botanic Gardens, and National Arboretum), spent a weekend in Baltimore with a pirate cruise, a view from the observation deck, a visit to the other Washington Monument, and food from Little Italy. We ate empanadas at a street food event and injira in an Ethiopian restaurant. 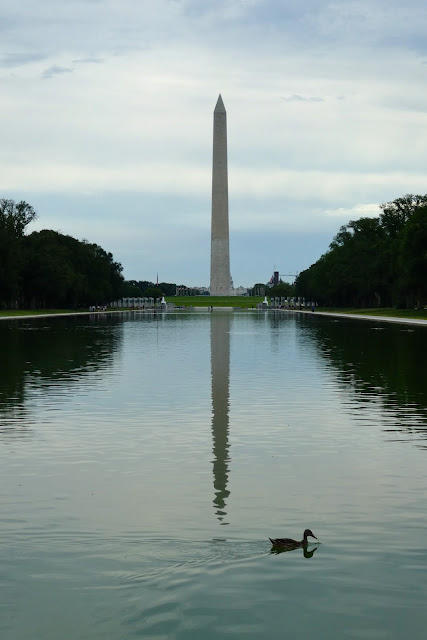 Most impressive, educational, and moving were the five-plus hours we spent in the Museum of African American History and Culture. It was a lot to take in—sobering, uplifting, and really, really unsettling. Humanity has such a range—from brutal and barbaric to magnificent—it's hard to wrap your brain around. While I was looking at a display that included a book by Toni Morrisson, a woman turned to me and said, "Do you know who Toni Morrisson is? She died yesterday." I thought of Beloved and how much that book affected me. 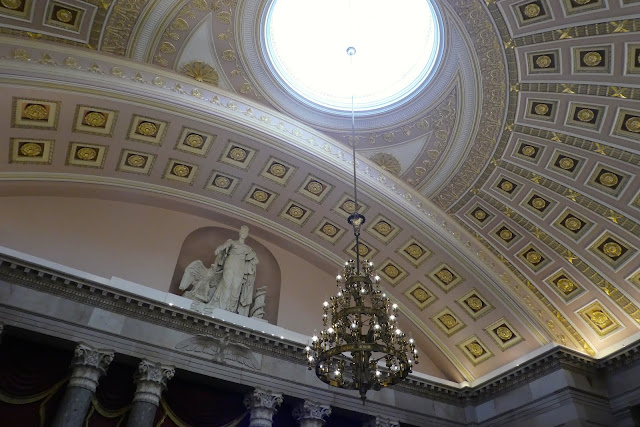 The kids were the perfect age for a vacation this rigorous and educational—they took in a lot, barely complained, and, most importantly, I didn't have to worry about them falling under a subway. They've also studied enough American history to understand the significance of what they were looking at. 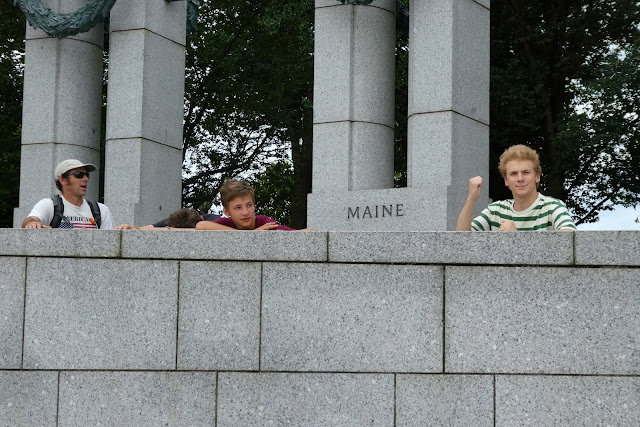 We stayed pretty much ignorant of current events during our trip, preferring to look at our country as if it were frozen in amber, and yet news of two mass shootings worked its way into our bubble. I wonder how long before we have a memorial, a museum, devoted to the victims of the mass shootings that have become woven into the fabric of this troubled nation. What year will be on the exhibit that depicts the day our "leaders" take action to end to gun violence?

This post went out last week to subscribers of my newsletter, along with some bonus material. You can subscribe here.
Posted by Andrea at 6:55 AM 2 comments: 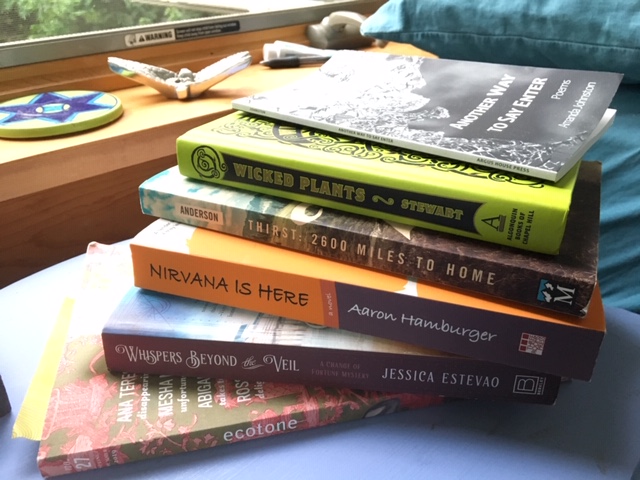 Usually my stack of reading is at least partially made up of books written decades (or sometimes centuries) ago—partly because I like buying used books and partly because I've been on a program to catch up with reading all the books I *should* have read by now. July was a bit of an exception, with three titles published in the last year and the others a decade or less old (which to me is new).

Poetry
I started my mornings with a handful of poems from Another Way to Say Enter, a collection by my friend Amanda Johnston. Amanda's poems are smart and sassy, they play with language and form, they are by turns humorous and heart-wrenching, and they never fail to strike a nerve.

Nature Writing
For our fall selection, my naturalist book club chose The Drunken Botanist by Amy Stewart, but not finding that title at the local bookstore, I picked up Wicked Plants instead. (I'm more interested in poison than alcohol anyway.) It's a bit slow-going, because it's not written in a continuous narrative, but rather in short (2-4 pages) passages about individual plants. However, it's an intriguing look into the more dangerous members of the plant kingdom. Also, I kind of love that Amy Stewart both writes about the natural world AND writes mystery novels. (I haven't read the Kopp sisters series yet, but I plan to.) And I just found out she paints, too. So basically she's living my best life.

Nonfiction
I read Thirst by Heather Anderson both because I'm writing my own hiking narrative (still) and because I love reading adventure memoirs. The book tells the story of Anderson's fastest known time hike of the Pacific Crest Trail. Though I'm more likely to score a slowest known time on any hike I do, I still found it a page-turning read and it gave me insight into why someone would want to hike 40+ miles per day and an understanding that such an endeavor is not necessarily (in Anderson's case anyway) a stunt.

Fiction
I really enjoyed reading my friend Aaron Hamburger's latest novel, Nirvana is Here, a tale about a gay, Jewish high school student finding his identity, coming to terms with his sexuality, and coping with sexual assault in the early 90s Nirvana era. Ari, the narrator, is so engaging and his desire to find his place in the world is so relatable that rooting for him all the way, and dying to find out what would happen—another page-turner!

I also devoured Whispers Beyond the Veil by Jessica Estevao, about a young woman who grew up as part of a traveling medicine around the turn of the 20th century. She runs away from the show after a tragic incident, in which she was inadvertently complicit, seeking out an aunt in Old Orchard Beach Maine, where she establishes herself as a spiritualist medium, but where her past comes back to haunt her. I've almost finished rereading the entire Elizabeth Peters/Barbara Michaels oeuvre and I'm looking for a replacement. Estevao *might* fit the bill—I liked the characters, setting, and storyline, although there could have been a little more spine-tingling-ness to the supernatural element. I'm excited to read more by Estevao.

Journal
I'm terrible at keeping up with reading the magazines and literary journals I'm subscribed to. I thought by keeping one—this month it's been Ecotone—on the nightstand I might have a better chance of reading it all the way through. I'm making slow progress because I'd almost always prefer picking up a novel or book-length narrative. Although when I do pick it up, the short stories, essays, and poems are always first-rate and worth reading.

What's on your nightstand?
Posted by Andrea at 11:17 AM 4 comments: