One Week in Fairyland 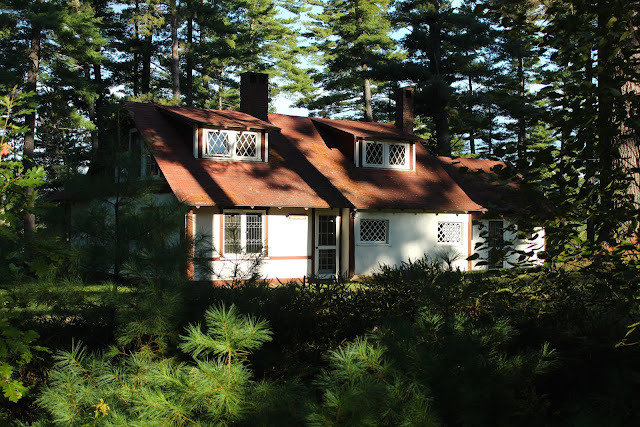 Earlier this month, I had the great good fortune of spending a whole entire week away from home at an artist colony on a lake in Western Maine. 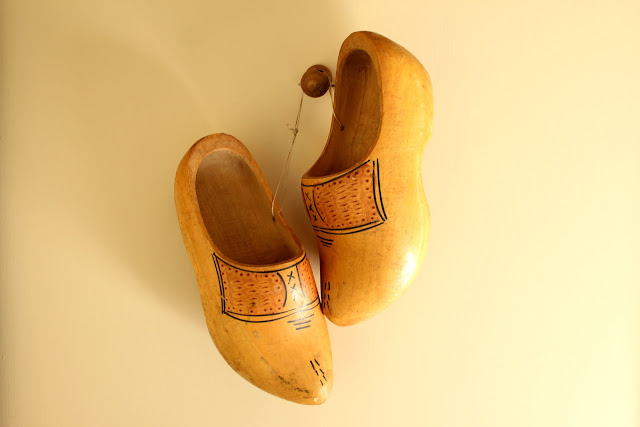 I had the most charming little cottage all to myself. 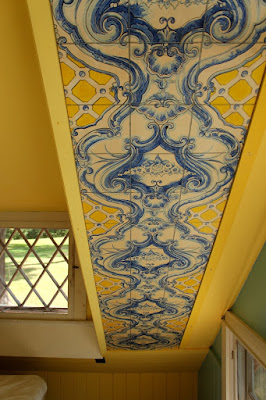 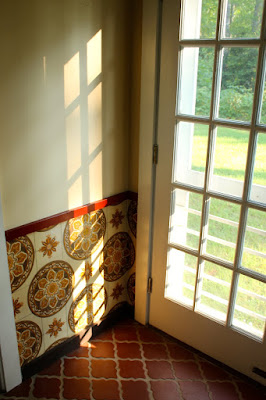 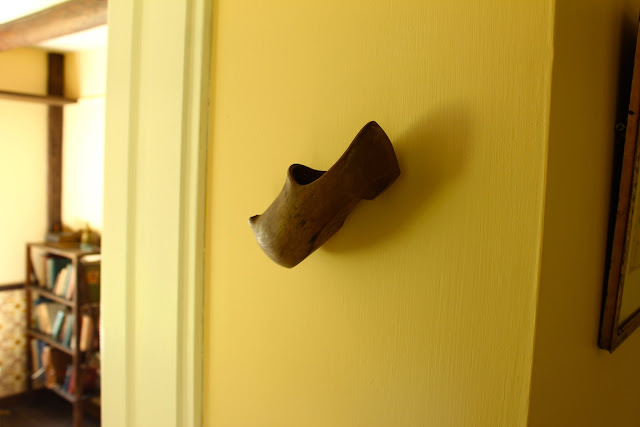 I shared the property with four other artists (including our hostess), each of whom had her own cottage, spaced far enough apart from each other that we only saw each other when we wanted to. 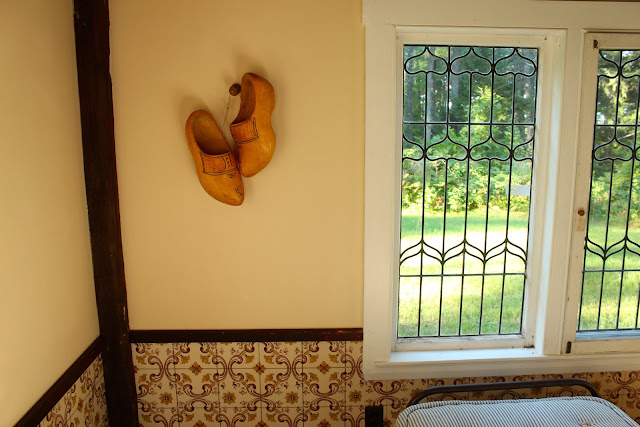 Each cottage was sweet and unique, and I'm quite sure each of us believed she had the very best one (but in my case it was true). 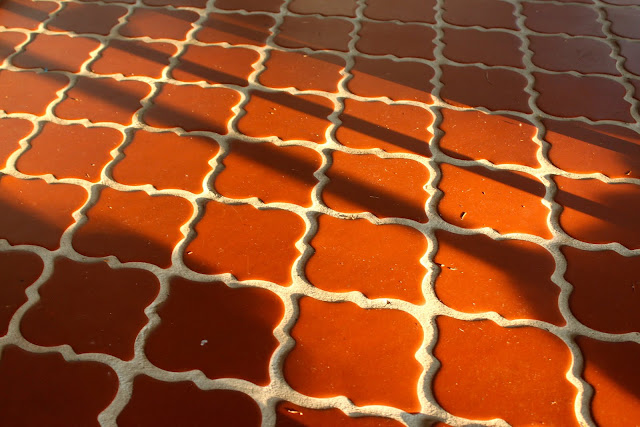 Mine was named Viking Court, and I'm pretty sure The Three Bears moved back in after I swept it out and went on my way. 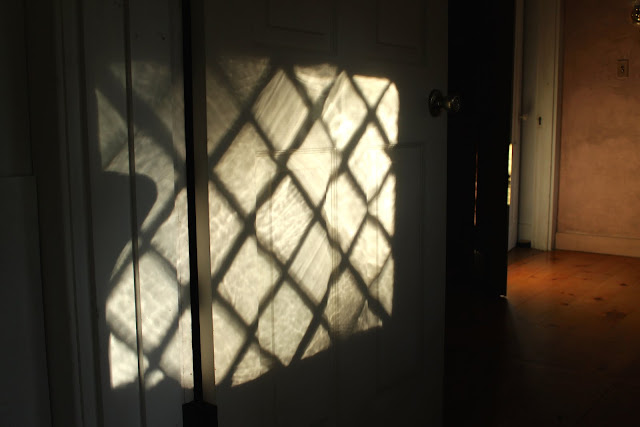 Inside it had the most amazing array of patterns—tile and wallpaper and linoleum and window panes. I couldn't stop taking pictures of the intersections of light and pattern. 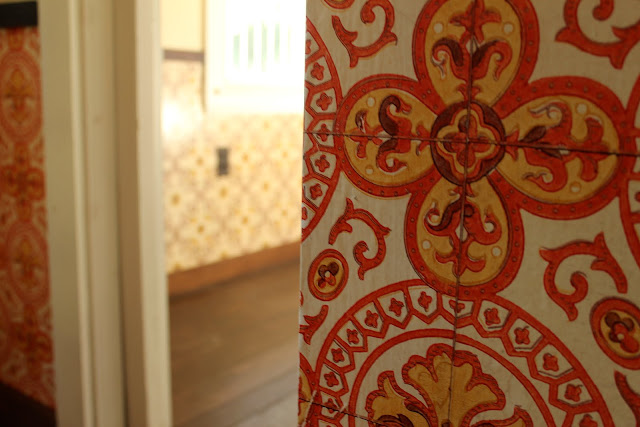 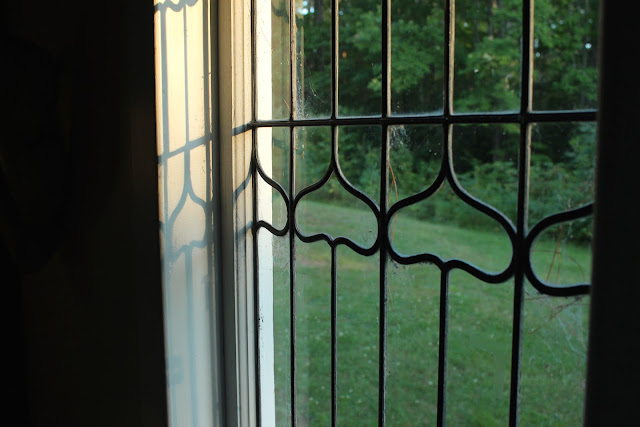 Even the giant spider webs under the eaves made beautiful patterns. 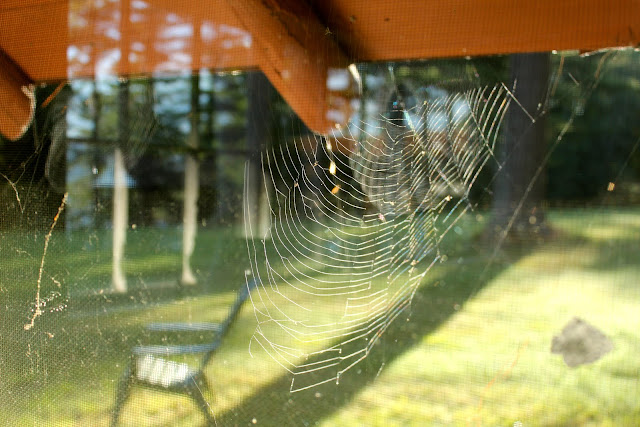 I also painted wildflowers and mushrooms and visited the big chestnut tree and went on a tramp with a friend who led a group of land trust docents and swam in the lake every day. I was extra-lucky to have been awarded a week of beautiful sunny weather sandwiched between two rainy weeks. 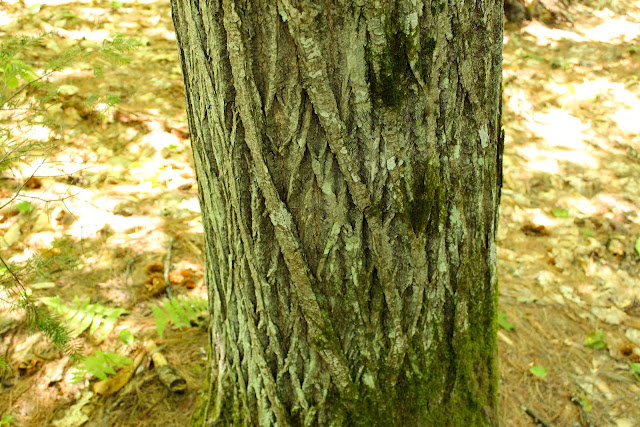 I got some work done, too—a full revision of my entire manuscript (handwritten changes on a very thick printout). A lot of work remains to be done (I filled seven pages with notes of things to research), but I feel good about what I accomplished and ready to move on to the next step. 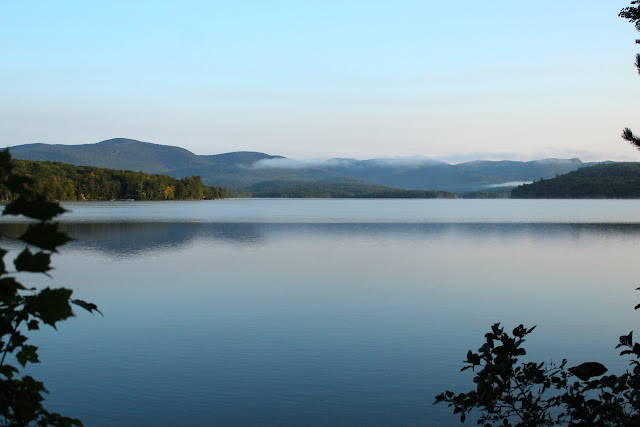 Every day I had a moment where I thought, "E and Z's bus will be here soon…" or "I have to go pick up M from cross country…" or "Is there a soccer game today…" or "It's time to start dinner…" and then I realized…no. I don't have to do anything or go anywhere. I'm not responsible for anyone. 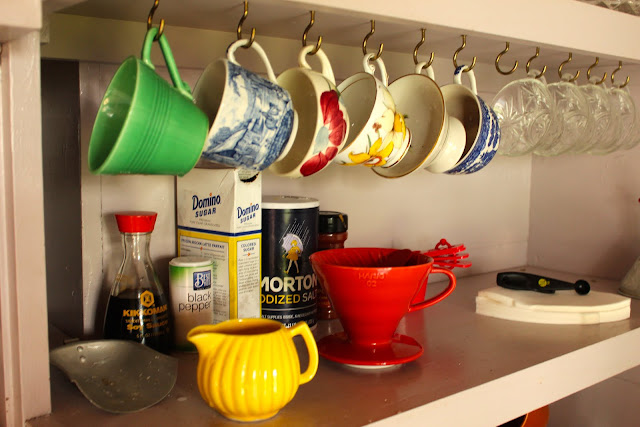 Two weeks have gone by since I left and I'm having trouble believing I ever really was there. 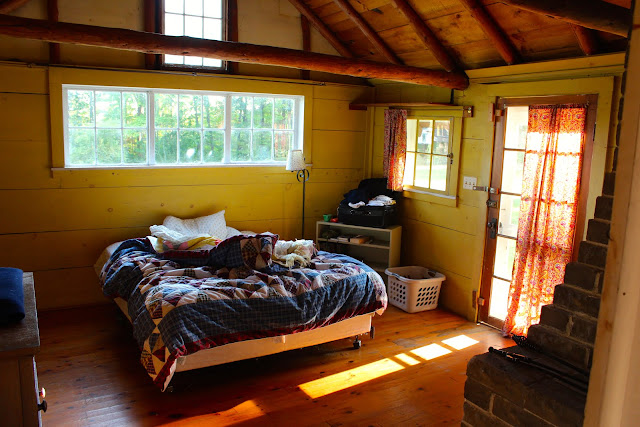 I hope the Three Bears are happy to have it back.
Posted by Andrea at 9:39 AM No comments:

Having a single post to cover all I read in 2016 was a bit overwhelming—both to write and, I'm sure, to read. So I've decided instead to do a monthly recap of books I've read, and share a little about each book. For past months, see: 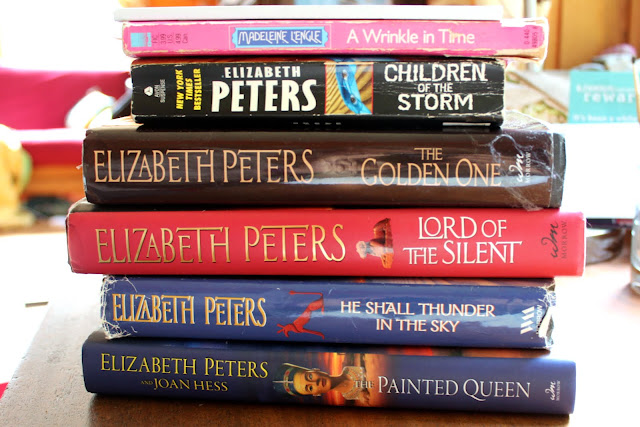 I was going to say I didn't read much last month, but I guess that pile isn't too shabby. I read very little on our three-week road trip. I brought plenty of books with me and bought even more along the way (national parks have the best book stores), but I didn't find time to read more than a few paragraphs. But it appears that I made up for lost time when I got home.

Read-Aloud. I started reading A Wrinkle in Time to the kids in the tent at night on our return trip and finished up after we got home (with only E listening at the end; he's my best audience). I was surprised to find nothing familiar about this book, even though I've always assumed I'd read it at some point in the past. I was also surprised by the religious element. I'd thought the L'Engle books were the humanist antidote to the Narnia books, but that must be something else? While we were driving, I had E and Z each read aloud from books I'd brought along for them (gifts they'd received over the last year but hadn't yet read) and was appalled by the atrocious writing and just generally dumb premise in both of them (one by a bestselling adult author) so I was pleased that the writing in Wrinkle was decent and the story carried along at a good clip, but my reaction overall to the book was, "Huh?" I just found it kinda weird. Maybe because I'm not usually a sic-fi reader I haven't learned to suspend my disbelief? I don't know, but at least now I can say I've read it.

Poetry. After we got home, I got back in my read a poem or two each morning habit, and read the short collection, Mothering Through, by Catharine Murray, which I had picked up earlier this summer on the alumni book table at my MFA reunion. I'm not a great judge of poetry, so I won't speak to the quality of these poems, but other than the subject matter (the author's young son dying of cancer), I will say they weren't terribly memorable.

Fiction. And it would appear I was still in summer reading mode this month, continuing with the Elizabeth Peters/Amelia Peabody marathon that's been going on all summer. The boys and I even listened to audiobooks of two of the books (which I reread earlier this summer) on our drive out to Colorado. I suspected they would enjoy the ones where Amelia's son, Ramses, is young (and always stirring up trouble) and I was pleased to find I was correct. I finished the Painted Queen, which is the posthumously published (and written by another author) final book in the series, and I was still disappointed in it, for all the reasons I went into last month. The disappointment was tempered by the fact that six books follow The Painted Queen, if the series is read in chronological (rather than publication) order. I read the next four and I'm halfway through the fifth of these, which means I'll get back to more Serious reading later this month.
Posted by Andrea at 9:32 AM No comments: 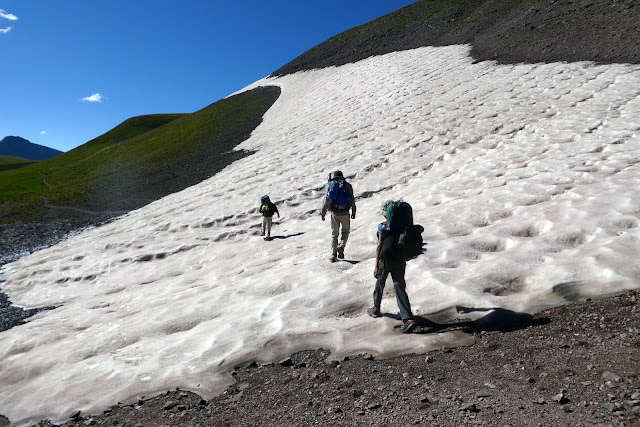 The last (for now) of the short pieces I've been writing over the last year about our Colorado Trail hike last summer has just been published in TrailGroove Magazine, Issue #35. My piece, Thru-Hiking en Famille is less of a how-to than a how-we-did, but if you're looking looking for tips on getting your family out on the trail, or are just curious about the nitty gritty details of our trek, or if you just want to see more pictures of Colorado's scenery, please check it out!
Posted by Andrea at 11:14 AM No comments:

While I was away on our cross-country road trip, this book was released:

In which my essay, "Individuality, Mutuality, and a Game of Twister" appears.
You can read an excerpt of my piece here.
If you have twins, triplets, or more, or if you just like horror stories, consider purchasing a copy:

Posted by Andrea at 8:00 AM No comments: 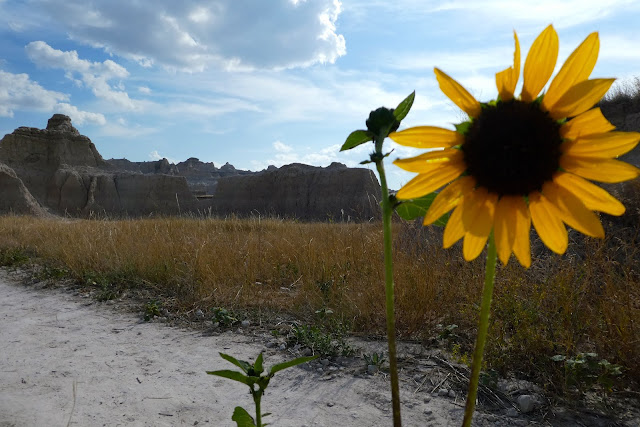 My September Common Ground newsletter went out today. If you don't already have a subscription, you can check it out here and subscribe here. If you've already subscribed but didn't receive your copy, check your spam folder and "promotions" tab.
Posted by Andrea at 4:34 PM No comments: