I'm pleased to share that my essay "Five Hundred Miles" appears in the 2022 issue of Deep Wild: Writing from the Backcountry. 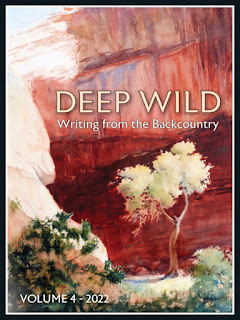 My 15-year-old son Milo and I are hiking along the backbone of a ridge. The land drops away on both sides to deep, green valleys. Beyond the valleys, jagged peaks rise up, red and gray dusted with green. Farther in the distance, more mountains stretch hazy and blue to the edge of the sky.
We climb up sharply, heading toward a rocky knob—the high point mentioned in the guidebook, I hope. I lift one foot after the other, repeating a mantra I found in a book on walking meditation: I have arrived. I have arrived. Looking down, I notice the track of a mountain bike between rocks.
“What a stupid place to ride a bike,” I say.
“What a stupid place to do anything,” Milo replies.
It tells a little bit of our Colorado Trail story, although it's not a direct excerpt from Uphill Both Ways (though you might recognize a phrase here or there. . . I'm a strong believer in recycling).
I'm notoriously bad about keeping up with reading the literary journals and anthologies that come my way, even when my own writing is included. But I've read the two previous issues of Deep Wild and have started in on this one, and the writing is really good. If you love reading about nature and wild places, you'll love this journal. You can order your copy here.
And if you enjoy my essay, you'll definitely love my book, which you can order from one of the links listed here.
Posted by Andrea at 7:41 AM No comments: 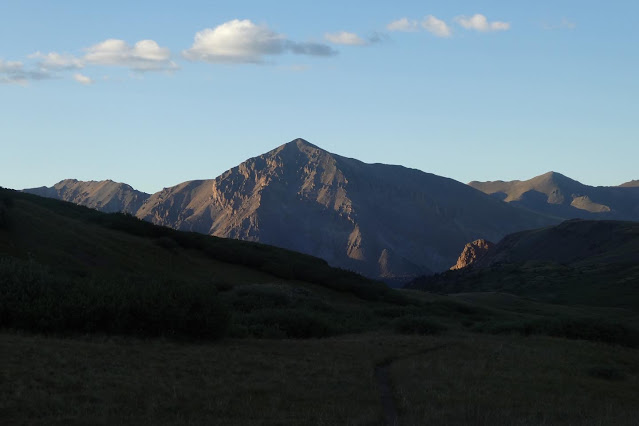 Earlier this week I had the opportunity to give a presentation and lead a workshop at the low-residency MFA program I graduated from eight (!!) years ago. It was so good to be in a milieu of writers for the day, and both my sessions went incredibly well---I felt good while they were happening and I got good immediate feedback from a few students who stuck around (I think I might even have acquired a fan). It made me think I want to do more of it. Not teaching every day, and not in a traditional classroom setting. Certainly not to children or (horrors) teenagers. But adults eager and excited to learn, in a beautiful location, where I don't have to do any of the work to promote the event or recruit the participants, yes please.

So that's on my to-do list, what I'm thinking of as my leveling-up plan. Although it's not so much a plan yet as an aspiration, a desire to raise myself up to the next rung in the writerly career. Some steps along the way include illustrating my second book and writing my third book. Both of these seem, from where I stand now, really, really hard. Beyond my current abilities. But I remind myself that when I was in the early stages of writing Uphill Both Ways that I didn't feel smart enough for what I wanted to do with the book---incorporate natural, cultural, and environmental history in the travel narrative in a way that felt natural and seamless to the reader. All that research, all that managing of different narrative threads seemed like it was going to be too difficult and unwieldy. But just as when you face an impenetrable mountain range you can find a path through, I found my way into the heart of the story I wanted to tell, and I succeeded in writing it the way I envisioned.It just takes putting one foot in front of the other, or in this case, pen and pencil to page. So that's my plan for July and August, daily drawing sessions, and writing or reading/research sessions. I'll also be playing along with the Summer Blueprint & Butt in the Chair Challenge with #AmWriting and Author Accelerator. By the end of August, I'll have a plan for Book #3, and although I have a pretty good (I think) mental picture for how this book will go, having it all on paper should make it that much easier to stick to it. I also want to try to avoid trying to do ALL THE THINGS this summer, as is my wont. Yes, birding, butterflying, dragonflying, hiking, and kayaking. Beach trips. Yoga when I get around to it. Reading through the books stack (which unaccountably keeps growing). Keep on promoting Book #1. That's a lot already, so I'm going to try to avoid adding additional projects to the list. Wish me luck!
A version of this post went out recently to subscribers of my newsletter, along with some bonus material. Subscribe here and receive a free PDF of my illustrated short essay "Eleven Ways to Raise a Wild Child."
Posted by Andrea at 10:18 AM No comments: 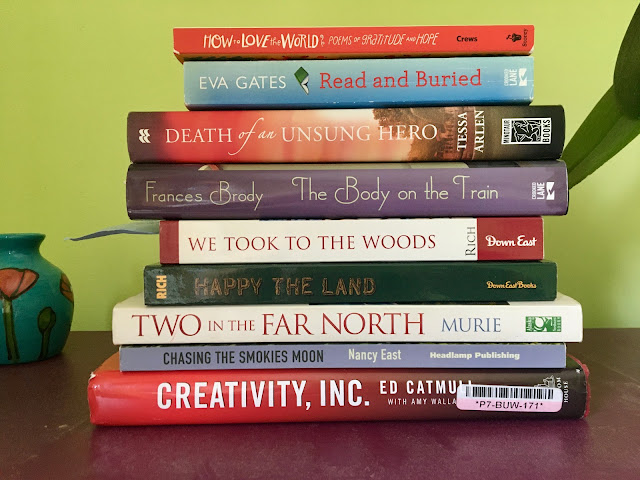 Don't mind the dust; these books have been stacking up for a long time.
As May turned to June and I kept adding books to the stack, I sort of lost track of which I'd read in which month, so I decided to just mash the two months together.
Poetry 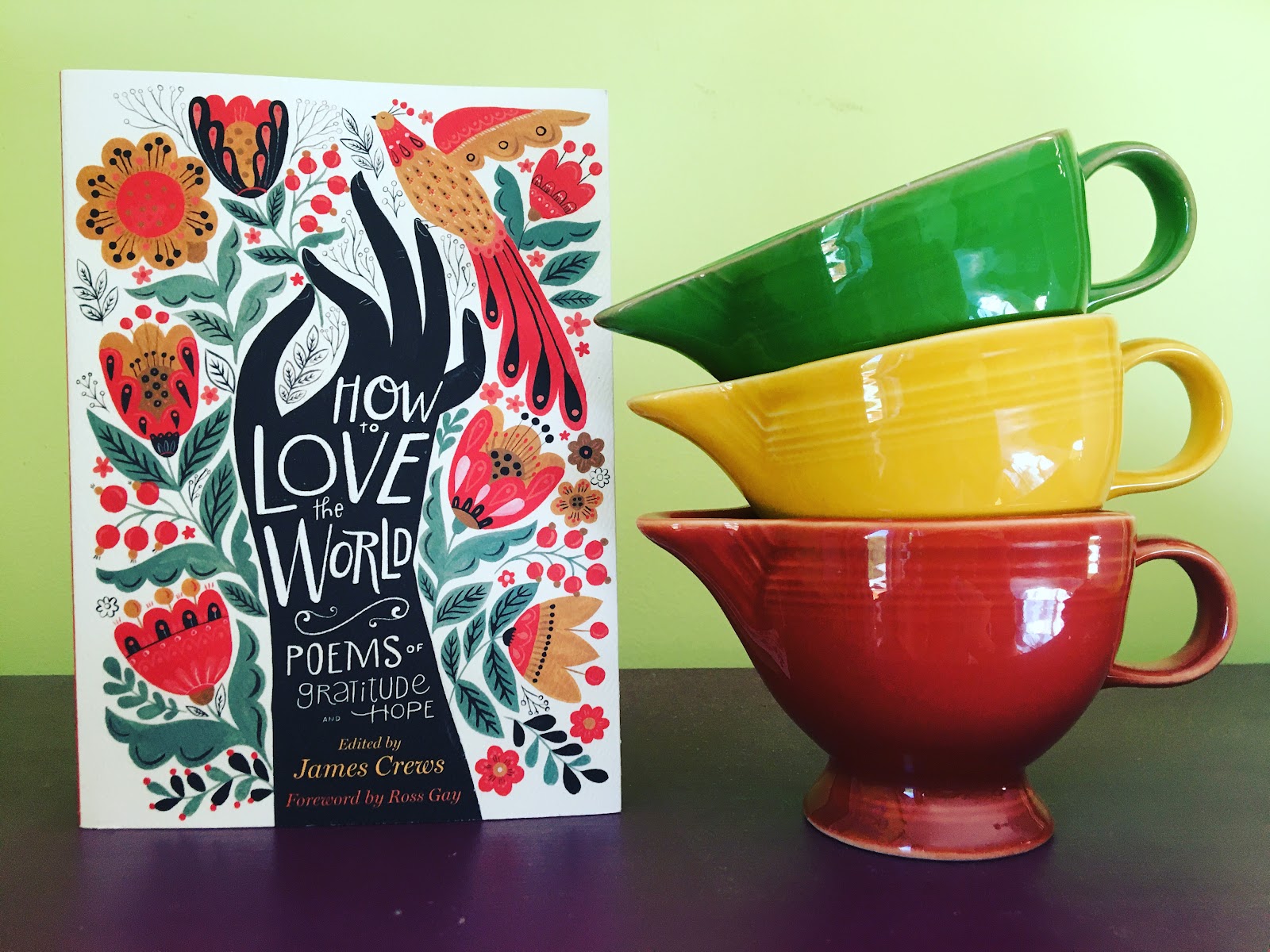 In April I picked up this sweet little anthology: How to Love the World: Poems of Gratitude and Hope, edited by James Crewes. It's a lovely collection from poets both familiar and new to me. And we can all use as much gratitude and hope as we can get these days, no?
Fiction
I've been in the mood for light fiction, and my mom had sent me a stack of mysteries earlier in the year that fit the bill: The Body on the Train by Frances Brody, a historical, traditional mystery with rhubarb and coal mining; Death of an Unsung Hero by Tessa Arlen, also historical and traditional, with World War I PTSD (not what it was called then) patients and false identities, and Read and Buried by Eva Gates, a contemporary cozy with a lighthouse library and a treasure map. All feature amateur sleuths, which I prefer to police procedurals, and I think my favorite of the three was The Body on the Train.
Nonfiction
I've been rereading certain books for a new writing project I'm working on: We Took to the Woods and Happy the Land by Louise Dickinson Rich, about Rich's experiences living in a very remote spot in the Maine woods with her husband and young son (and later daughter) in the 1930s and 40s--a funny, poignant, beautifully drawn, and thoroughly entertaining description of her wild life. On the opposite side of the country, Margaret Murie's Two in the Far North, about traveling in the wilds of Alaska beginning with her journey there at age nine in 1911, followed by her honeymoon with her husband Olaus aboard a variety of boats and then dog sled, a boat trip into the interior with their infant son, and several subsequent trips after their family was grown (I also read Margaret's chapters of Wapiti Wilderness, not pictured, which she wrote in collaboration with Olaus, about their life in Wyoming raising kids in the mountains). Beautiful descriptions of the people and landscape of Alaska and the challenges and joys of making a living in such a remote region before the advent of modern technology.
One of the things that's fun about publishing a book is getting to know other writers in the same genre. Nancy East is one of these. Her book, Chasing the Smokies Moon, tells the story of hiking, with a friend, all of the trails in Great Smoky Mountains National Park (more than 900 miles of them) in under 30 days, for the fastest known time, as a fund raiser for search-and-rescue training. It made me think it would be fun to do something similar in Acadia (although, as you  know if you've read Uphill Both Ways, not for any kind of speed record!). East overcomes a lot of difficulties, including injuries and being separated from her children for a whole month, to reach a goal she set for herself, raising money for search-and-rescue training along the way. She is an inspiration to hikers and mothers alike.
I'm training to be a book coach, and one of the books recommended in the course is Creativity, Inc. by Ed Catmull, the founder of Pixar. Funny story: there is another book of this same title, which was written not by an animation pioneer but rather The Harvard Business Review, and that's the book I accidentally purchased at first. The case study in the book is a company that designs office furniture. Now, I've worked in a lot of offices, and I can say that without exception office furniture is universally ugly, uncomfortable, and dysfunctional, and if there is one iota of creativity that goes into its design, it is in the service of ensuring that the furniture enhances the misery of its users. I was relieved to figure out that I'd bought the wrong book before I got too far into its dusty pages. Once I got the right book, it was entertaining to read about the early days of Pixar and the evolution of that company, and it made me want to go back and watch some of their movies, most of which I never saw, because our kids were always like, "We already watched that at day care. Waah!" I don't often read books about business management (which is what, mainly, this book is about; there's one small section relevant to the work of a book coach), but whenever I do, all I think about is how badly managed almost every place I've ever worked at is. The same was true in this case as well. Do you think actual managers ever read these kinds of books?
Don't forget you can order a copy of my book, Uphill Both Ways: Hiking toward Happiness on the Colorado Trail from any of the vendors listed here.
Posted by Andrea at 10:04 AM No comments: