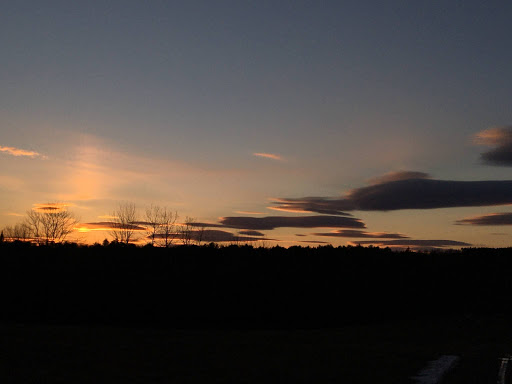 Last month I was scrolling through my online bank records for 2020 while preparing our tax info for the accountant. I started in December and worked backward, and when I reached the early part of the year, before the pandemic and the lockdown, I became unexpectedly, unbelievably sad. Not because I had booked tickets for the vacation of a lifetime that would have to be cancelled or put a deposit on a venue for a major event that would never happen, but quite the opposite. The utter ordinariness of the transactions--a trip to Goodwill or the bookstore, haircuts for the boys, a pair of shoes--seemed so foreign to the way the world is now that I felt a deep, deep grief.

The pandemic did not change my life materially. My nearest and dearest have stayed safe and healthy so far. I would have been off of work for the entire summer and fall anyway. I might say I even thrived on the opportunity to be in the company of my family and to have the time that I would otherwise have spent socializing, ferrying my kids around, or running errands to focus on writing and spending time in nature around my home instead.

Many people are expressing optimism that now that vaccines are making their way into arms at a thrilling pace, we'll soon be able to go about our ordinary business. But this last year has driven home the reality that "ordinary" is relative. That what's ordinary to me is not an experience that is available to many: Black men and women who are brutalized and murdered by police and vigilantes while going about their ordinary business of buying a sandwich, going for a jog, sleeping. Elderly Asians who are attacked in the street by white supremacists. Asian women shot in their places of work, again by angry white supremacists. Women of all races beaten and murdered in their own homes by those closest to them.

The weather this year has also been anything but ordinary: wildfires going into December; tornados in February; blizzards in the Deep South; a town flattened by a derecho. Thirty years of denying and ignoring the science on climate change are coming home to roost. It seems unlikely we'll ever see an ordinary season again.

Early last year, I was working on a short story called "Soccer Moms at the End of the World." It was to be a somewhat comic, near-apocalyptic tale (quite possibly a genre I invented) about people going about their normal business as if a quite obvious catastrophe was not looming. As the coronavirus epidemic swelled toward pandemic, I felt the urgency of writing it and was making progress. Then, after my kids' school shut down, I lost my daily writing time, the half hour between 7:30 a.m. (when I arrived at work after having dropped them at their bus stop at 7:00) and 8:00 (when I had to actually go into the office and work). Then my work closed too, and what could have been a full-time writing schedule instead became a full-time doom-scrolling schedule. And the apocalypse had become all too real--bizarrely slow-moving but incredibly palpable--which made writing about a fictional apocalypse a little weird. Also, I didn't know where that story was going. I didn't know what to do with those moms, blissfully ignoring the burgeoning crisis as they bought snacks, drove their kids to soccer games, and sat on the sidelines chatting about everything but what was most important. I still don't know what to do with them. They have to get up every morning and take care of their families. As do we all.

Posted by Andrea at 7:00 AM No comments:

This isn't much, but I'm all for celebrating small wins this week. Several years ago C gave me an embroidery kit for Christmas (because I asked for it) by Cozy Blue Handmade. It has four patterns--all of the same image of plants and birds but in a different color scheme for each season. They're totally adorable, but the thing is, I don't really like following patterns or instructions (except while knitting). Also, it's harder to embroider while watching TV and the lighting in our house wasn't that great. Which is to say I hadn't gotten very far over three or four or five years since I got them.
This winter, I bought new lamps to make working and reading in the evening easier and more comfortable. And I found that if I'm watching something sort of mindless, embroidery and TV aren't totally incompatible. And so I finished the first of the four seasons: winter cardinals (which, truth be told, was the one I'd made the most progress on in the past, so it really is a small win, but still a win). 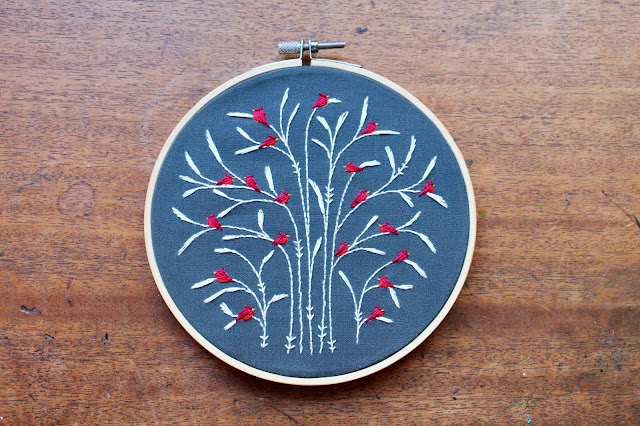 While I had my embroidery box out, I tidied it up, winding all of the floss onto little cards. (I don't have a "before" photo, but picture a packrat's nest.) This was a useful activity for keeping the hands busy during interminable conference calls when knitting might be a little too obvious. 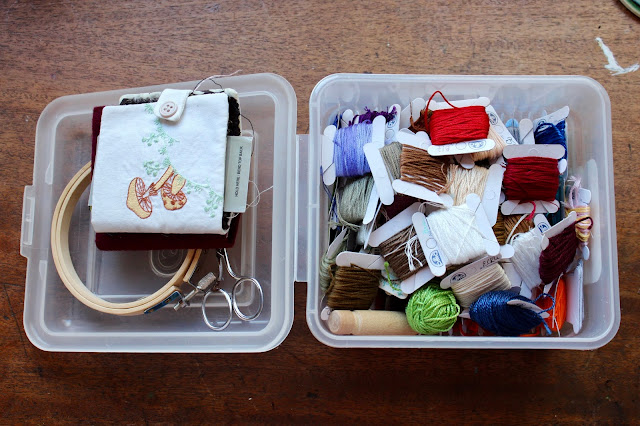 Also in the embroidery box was this little scene I stitched up a few years ago on a weekend trip to the pond. This is more my kind of embroidery. It might not be as professional-looking as the kit, but it was more fun and personal. I have to think of what to do with it, though. 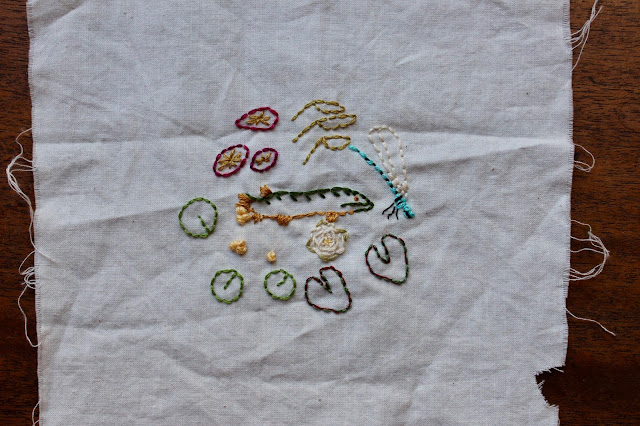 I also found these embroideries from drawings M made when he was very little: a smiling, happy elephant and turtle and a very long, winding snake (which, apparently, was my Waterloo on this project). 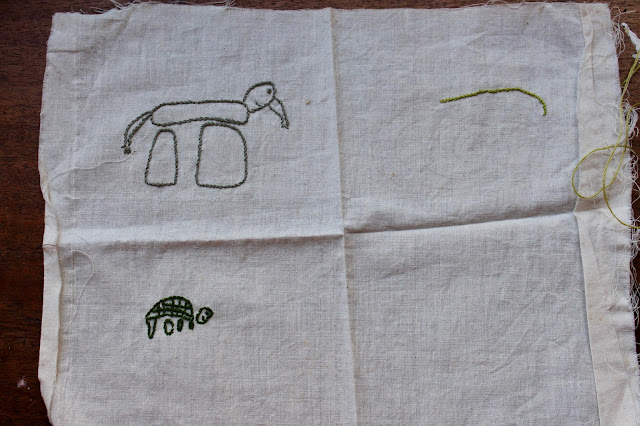 I don't remember what I planned to do with these and I don't know what I should do with them now, if anything. I could dig out my kids' old drawings and do a whole series, put them together in a wall quilt or something. But I'm not sure I could handle it. They are so far from the cute little kids who drew cute little animals (and, if I recall correctly, I had to really dig to find these little animals--M mostly drew robots and space and war scenes).
Posted by Andrea at 7:36 AM No comments:

A monthly post about my progress toward finishing a very large stack of books. Past months' posts:
January 2021
I only managed to finish two books in February, but they're both from my Book Stack and they're both on my list of twelve particular books I want to finish in 2021, so I'll call it a win. 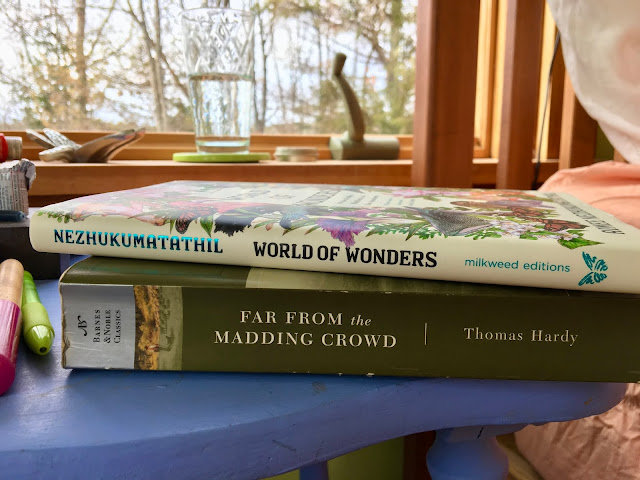 First, for fiction, I read Far From the Madding Crowd by Thomas Hardy. I'd read Tess of the d'Urbervilles way back when (in 2009! How is it possible that 12 years have gone by?) and absolutely loved it. I don't know why, but I never got around to reading any more Thomas Hardy since then. My sister had given me Far from the Madding Crowd sometime between then and now, but I never picked it up--a book that long is just such a commitment, you know?--until last month when I finally compelled myself to dive in. And you know what? I was reminded of what I loved so much about Tess. Hardy's lush descriptions of landscape and people and weather (there's a thunderstorm that goes on for three chapters). He does have a tendency to make unflattering sweeping generalizations about women, though I suspect these are tongue-in-cheek, since they're usually used as counterpoint to what the women characters (usually Bathsheba, heroine of this book) actually are like or what they actually do. I will admit that it got a little bit slow in the middle, and I didn't love it quite as much as I loved Tess, but I was happy that it didn't end tragically (for Bathsheba and the hero, Gabriel Oak, anyway; other characters did come to unhappy ends). Perhaps I'll read Jude the Obscure or The Mayor of Casterbridge before another dozen years go by. 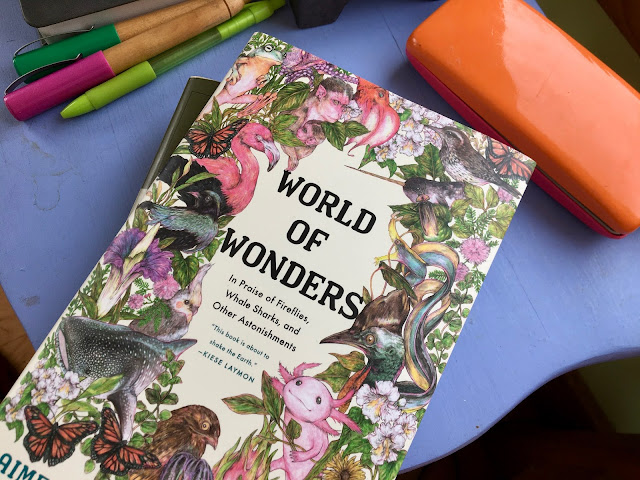 In contrast to that nearly 150-year-old novel, my nonfiction for the month was nearly brand new: World of Wonders by Aimee Nezhukumatathil, subtitled In Praise of Fireflies, Whale Sharks, and Other Astonishments. "Praise" is a fitting description; it's like a series of praise poems written in prose, which is apt, since Nezhukumatathil is poet. I won't write too much about this book here and now, because I'll be reviewing it in Literary Mama in a couple of months, and I'm already excited to read it a second time for the review. Stay tuned!
Posted by Andrea at 12:22 PM 1 comment: