During the month of May, Becky Tuch of Lit Mag News Roundup will be conducting live interviews with editors at literary magazines with a focus on motherhood, and I'll be part of the team representing Literary Mama.

The schedule of interviews is:

For more information about any of these editors and literary magazines or to register for the sessions, click here. Hope to see you on May 23rd!

Posted by Andrea at 7:07 AM No comments:

A monthly post about what I've been reading, with aspirations

but no real hope of reading down a very tall stack of books.

Previous posts from this year: 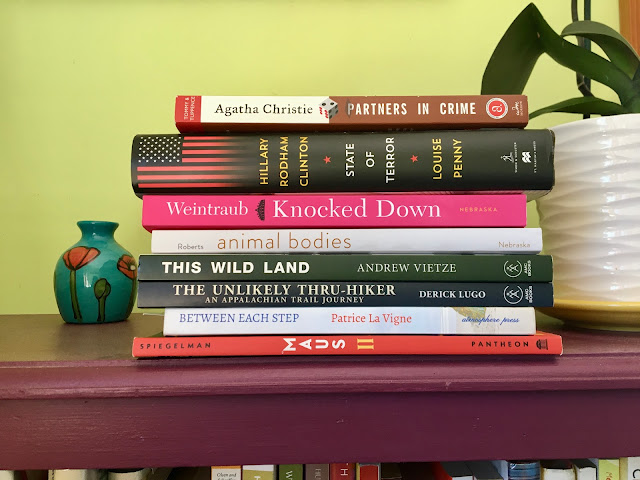 Looks like March was another read-ey month, with eight books finished. Let's get started, working from the bottom of the pile up.
Graphic
I read Maus II, having read Maus I in February. The second is as harrowing as the first. However, I still don't understand why some school board in Tennessee is bent out of shape about it, unless they're afraid of children learning about the logical outcome of fascism. Still, I think both should be required reading.
Nonfiction
In the process of marketing my book, I've made some online connections with other writers of outdoor adventures. One is Patrice LaVigne, author of Between Each Step, her account of hiking the Te Araroa trail from one end of New Zealand to the other. Talk about a difficult journey. Between challenging route finding, dodging ocean waves on the edge of cliffs, and man-eating vegetation, it certainly makes my long-distance hiking trips seem like a piece of cake. I appreciated Patrice's awareness, and inclusion on the page, of different types of birds and vegetation, geological features, and history of the areas they pass through on this hike.
Along this same vein, I read The Unlikely Thru-Hiker by Derick Lugo. The AT has never appealed to me, in part because it's so populated with other hikers, but Lugo's book makes the community made among other hikers seem like the best part. I so enjoyed his positive attitude, and I'm amazed that he'd never hiked or camped a day before setting foot on the Appalachian Trail. Best of all, the cover of the book is totally spectacular. 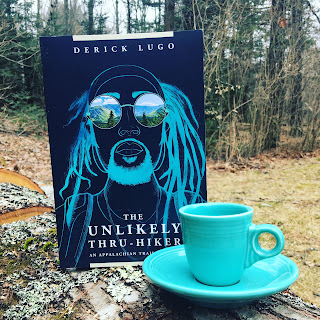 And one more outdoorsy book, This Wild Land by Andrew Vietze, about his experiences as a seasonal Baxter State Park ranger. Vietze shares both the harrowing (rescues and failed rescues) parts of the job and tedious (bathroom cleaning and chainsawing things) with vivid detail and good humor. It made me glad I didn't end up on the ranger path, as I once thought I'd want to be (no thank you to the bathroom cleaning; I get enough of that as a mom, and I'm all set with chainsawing things as well), but it did make me think it would be a good path for one of my kids to go on. Of course I won't be the one to suggest it; that's the surest way to send him in another direction.
Animal Bodies: Death, Desire, and other Difficulties by Suzanne Roberts is a collection of essays on loss (of a close friend, her parents, an others), love, and life. Some are more experimental, lyrical essays and others are more traditional in structure. All are lovely and thought-provoking. It was nice to read it soon after finishing her earlier volume, Bad Tourist, since many of the themes and characters are woven through both, and I always want to know more about a writer when I've been introduced through shorter pieces.
I read Knocked Down by Aileen Weintraub in two days, staying up wa-a-ay past my bedtime both nights. You wouldn't think a book wherein the narrator is stuck in bed through most of it would be that gripping, but it was. Aileen is placed on bed rest early in her pregnancy, and from the pull-out couch in her husband's family's falling-down farmhouse she battles loneliness, financial difficulties, and marital strain, while reflecting on her recently passed father and the loss of a close friend. I had to keep turning pages to find out what harrowing obstacle the universe would throw at her next and how on earth she'd find her way to the other side.
Fiction
I know people have issues with Hillary Clinton, but I don't want to hear them. She has accomplished an astonishing amount while facing hurricane-force headwinds, all with grace and humor. When I heard her and Louise Penny interviewed on NPR about their collaboration, the political thriller State of Terror, they both sounded so charming and fun I knew I had to read the book. It was a fascinating deep dive into geopolitics and White House intrigue. Unfortunately I finished reading this book, in which a nuclear plot is narrowly averted (I don't think that's giving too much away; no one who reads these books would expect the good guys to not triumph) and watched Terminator III, which ends in nuclear annihilation, on the same weekend that Putin began making noises about using nukes in his war on Ukraine. It all hit a little too close to home.
So I turned to something light, Agatha Christie's Partners in Crime, which is a collection of short stories featuring the detective duo Tommy and Tuppence, who are really working undercover as detectives in an effort to avert an international crime plot (I was a little fuzzy on that part). Anyway, the stories are clever and funny and pretty low stakes (I mean, there's the odd murder here and there and the occasional kidnapping, but all in good fun). It was a good palate cleanse.
Don't forget you can order a copy of my book, Uphill Both Ways: Hiking toward Happiness on the Colorado Trail from any of the vendors listed here.
Posted by Andrea at 10:01 AM No comments:

Not long after everything shut down in 2020, I started knitting this endless poncho from yarn I happened to buy, with no particular plan, when I ordered the yarn to finish C's vest. I'd enjoyed knitting, and wearing, the last poncho I'd made, I wanted to make another, and I found this fun pattern on Ravelry. 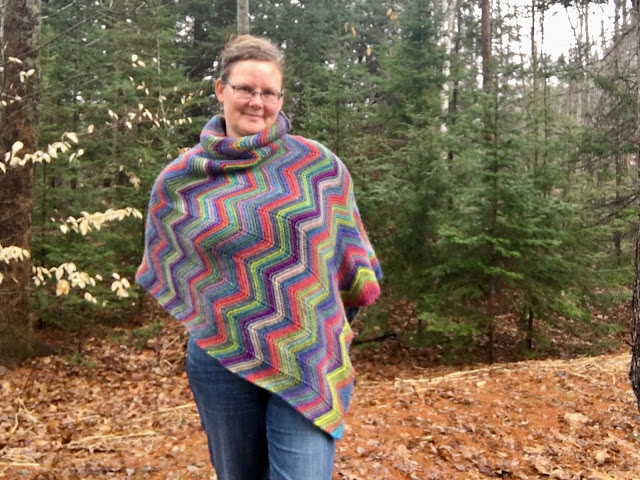 It's about 8 miles (okay, 80 inches, but who's counting) of zigzagging garter stitch, and it started to feel very Like Water for Chocolate-esque after a while. It represents many, many hours of binge-watching TV shows. After about a year of knitting, I took a long break, picking it up a few months later and again stopping when I was stymied about how to finish it. The problem was I could not figure out if the two halves were the same length or not due to the zigzags. (The whole thing is a kind of T shape, with a very short stem that makes up the cowl neck and a very long, fat crosspiece, that gets folded in half and stitched together.) Finally, after talking to a nice lady at a yarn store (wearing a fabulous, floor-length hand-knit dress), I figured out that I could mattress-stitch the seam together, starting from the neck, and work my way to the unfinished end, and either add or subtract rows as needed. (I still ended up adding rows, then ripping them out, because I forgot that the zig shouldn't line up with the zag.) After all that, I just needed to weave in about 16 trillion ends, and voila! The endless pandemic poncho is complete. If only the endless pandemic would wrap up as well. 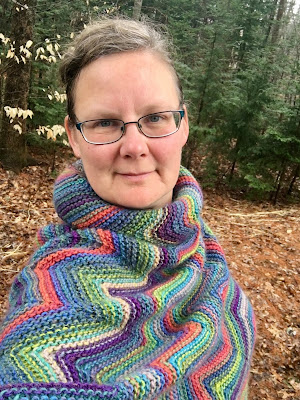 Ravelry notes, cursory as always, are here.
Posted by Andrea at 12:33 PM No comments: