We're heading off for Mount Desert Island and our third birthday party of the year this weekend (the second was another one of M's classmates--we went with a bowling gift card for his gift). This time the birthday boy is the son of our friends, so I had to put a little more thought/effort into a gift. Also he's only turning two, so I'm not sure what he'd do with movie theater thickes. Oh, yeah, and they live three hours away, so picking up a gift card would be a bit of an ordeal.


So last night I made this little springtime fingerpuppet purse (the one on the right), from Martha Stewart Baby, Spring 2002. (I know it's a bit of a stretch to start thinking about spring in February, but last year we were Easter egg hunting in two feet of snow, so springtime here is really more of a state of mind than an actual season). 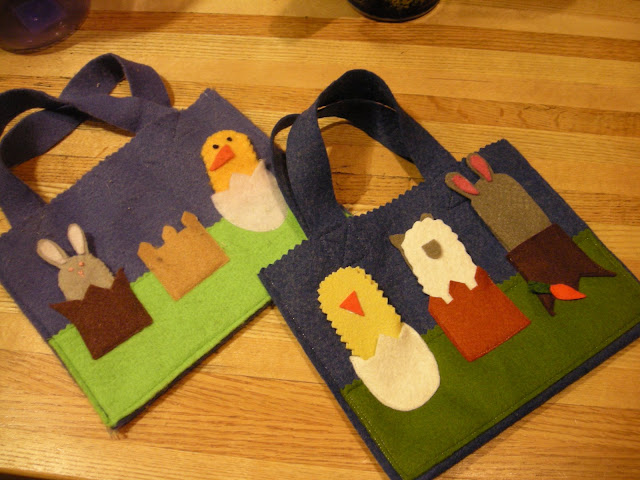 I made the one on the left for M when he was one, and in his purse stage. Not sure how much we've played with the puppets, but ML (mom of the birthday boy) is a teacher and probably a way more fun mom than me.


I had all of the materials on-hand (wool-blend felt that is much nicer to touch and work with than the acrylic stuff that I made M's out of). I started cutting out the pieces while the twins were taking a bath (C and M were off smelting--don't ask) and finished up at about the time the lunar eclipse peaked--about three hours, minus time spent getting kids ready for bed and a little break while I drank a cup of tea and perused the rest of the magazine. I'll sew on the faces and put the puppets together by hand on the drive up to MDI Friday. So maybe about two hours or less of hands-on work. I could have easily spent that much time driving to the toy store (25 min. each way) and obsessing about what toy would be well-liked by mom and kid, useful/used, not too damaging to the environment or to the people who made it, and neither too cheap nor too expensive. I think I'm liking this Buy Nothing Year. Now I just have to obsess about whether it would be tacky to tuck some "vintage" (i.e. used) Beatrix Potter books into the purse.
Posted by Andrea at 6:31 PM

Email ThisBlogThis!Share to TwitterShare to FacebookShare to Pinterest
Labels: Buy Nothing Year