I got a hankerin for eggrolls a couple of weeks ago, and the greasy logs filled with fluorescent pink pork and doused with MSG that pass for eggrolls in the "Chinese" restaurants in these parts were not going to cut it. My mom made eggrolls about once a year when I was a kid, along with battered and fried zucchini (one of the few methods of making this vegetable edible, in my opinion), with this fantastic sweet & sour sauce that I will present to you at the end of this post. As he was stuffing the rolls in his face, C remarked that I hadn't made them before, but I know I have made them at least once--back in our old apartment in Englewood, Colorado...in 1996!!!

In preparation, a week ahead of time, I handed C a jar of mung beans and said, "see if you can sprout these." (Growing sprouts is his big wintertime indoor gardening activity, and our major source of green vegetables). Then I gathered the ingredients and followed the recipe on the back of the Nasoya package (at one point un-mixing the vegetables because I hadn't noticed I was supposed to stir-fry the tofu first), rolled them up and shallow-fried them in a cast iron skillet. 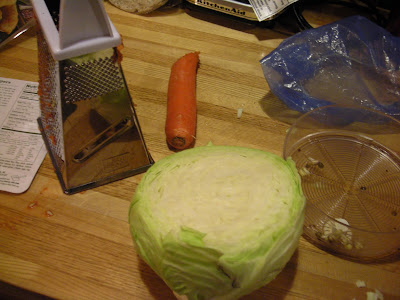 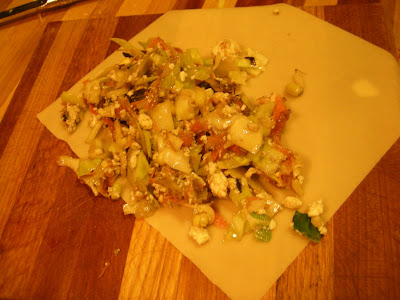 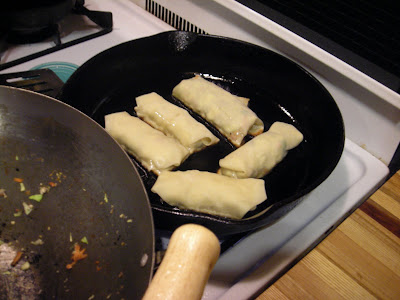 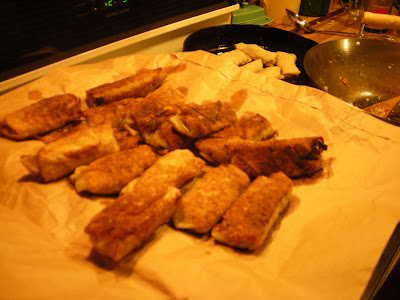 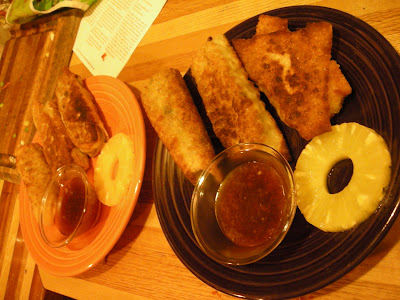 The eggroll recipe is pretty basic and though somewhat time-consuming, not difficult (although if anyone posesses the secret to rolling the eggolls up tight, let me know). My mom's sweet and sour sauce takes only a couple of minutes and blows any pre-made sauce out of the proverbial water. It tastes great in stir-fry too!

In a saucepan, combine:

1/3 c pineapple juice (drained from a can of pineapple chunks or rings, which you can add to stirfry or use as garnish)


Cook and stir over medium heat until thick and bubbly.

I made, I don't know, a mazillion eggrolls. E picked his up, devoured half and then wouldn't touch it. Z drank a small dish of sweet & sour sauce. M spent an hour poking it and asking what is it? what's inside of it? what does it taste like? Finally he nibbled a tiny crumb of the wrapper, plunged in for an infinitessimal bite of the filling, declared he liked it and wouldn't take another bite. So C and I had to eat a mazillion, minus one-half and one crumb. Tell me again why my jeans are snug?
Posted by Andrea at 12:20 PM