This weekend I held a little party to make baby hats for Soulemama's Mama to Mama Caps to Cap-Haitien project. I picked up a bunch of 2XL t-shirts in lollipop colors at Good Will. 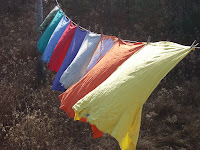 I assembled my materials. 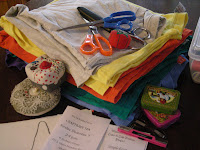 Our predicted snow showers turned out to be an all-day snow, with the temp hovering around freezing. Only one intrepid guest braved the icy roads (and nearly landed in a ditch). I tried not to take the weather personally; we had a very pleasant visit (sans children...we actually finished a sentence or two!) and managed to whip up 25 hats--which is about 25 more than I would have even attempted if I hadn't planned a party, so it all worked out. As collateral benefits, I got to eat 3/4 of a honey cake with lemon icing (I'd share a picture, but it came out blurry) by myself, and my house got cleaned about two-and-a-half weeks earlier than it would have otherwise. 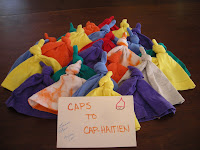 I thought I would feel bad cutting up perfectly good T-shirts, but it was OK (which means I can make some T-shirt skirts next summer!) It was kind of weird to think about these shirts made in sweat shops in Guatemala and Honduras, sold in Wal-Marts and Fashion Bugs, then donated to Good Will, sold again and cut up into hats for babies in Haiti...it was a reminder (like we needed one) of how very messed up our system is. Baby hats aren't going to change this, but if they can make a difference to 25 little heads, then that's a good thing.
Thanks L for braving the weather to make hats with me!
Posted by Andrea at 8:10 AM