The Other Two Chairs

After I recovered the first four of our dining room chairs, I placed the two chairs with old, grimy seats at E and Z's spots, figuring they're the messiest eaters (or at least two of the tree messiest eaters) in the house. But E did not like this at all. He kept rearranging the chairs so that he would have a nice, new, clean, orange seat. And he kept bugging me about getting the other two chairs redone. 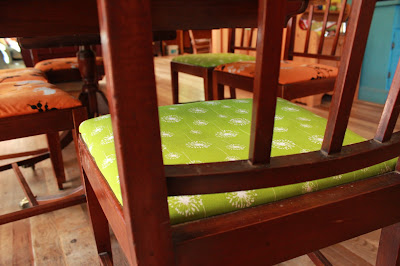 So I finally ordered the fabric––I decided to go with crazy green dandelions, rather than try to find something in the same color family as the first four chairs––and last weekend, when I had about ten spare minutes between other projects and activities and household chores, I ripped off the old, and stapled on the new.

Now E makes sure he has one of the green chairs at his spot. Only the best for that boy.
Posted by Andrea at 2:27 PM