At the beginning of each year (thanks to Lisa Romeo), I make a list of my accomplishments—specifically related to writing, but also including other aspects of life (because there's more to life than words)—from the previous year, before moving on to goals and plans for the coming year.

Before I get started on 2016's list, let's pause for a moment of silence for 2016, which was a year of great loss. C and I each lost a grandmother, one of my uncles died, and a close friend of ours from college died of a brain tumor. I've lost track of the number of famous people who have died in the last year (I'm sure there are lists, but I don't think I want to see them). A certain number are expected each year, I suppose, especially considering the kind of hard living that kind of life often engenders, but the sheer number of deaths last year seems outsized. These are our modern-day gods and immortals, and to watch them fall one after another seems significant. Also, it sucks when creators die while destroyers seem to live forever. Finally, let's bow our heads for the very-likely death-knell that democracy received with the meddling in our elections by Russia and the subsequent appointment to president of someone who not only lost the popular vote by 3 million but who has frightening authoritarian tendencies.
.
.
.
.
.
.
Now, on to the good things that happened in 2016 for me. This is a page from my Bullet Journal written on January 1 last year: 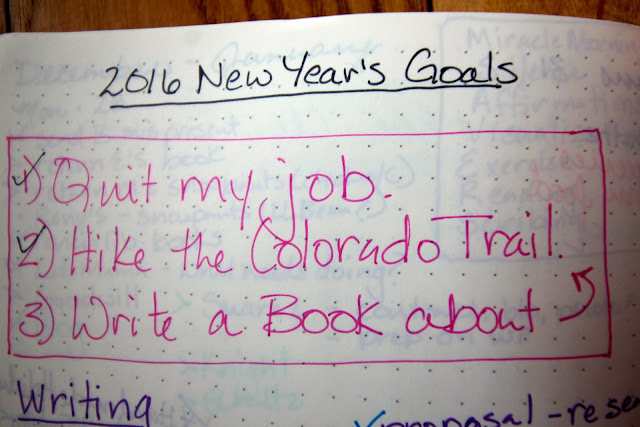 And guess what? I did it! I quit my job! I hiked the Colorado Trail! And I've made some progress on writing a book about it, plus I've been working on some shorter pieces inspired by the hike and have had one published, another accepted, a third submitted, and two more in process. I could stop this post right there and be satisfied, but let's do the numbers.

After a fairly abysmal level of submissions in 2015, I determined to average at least one submission per month in 2016. I did better than that.

Submissions: 45 (including one book proposal)
Rejections: 20
Acceptances: 9
Publications: 8 (plus my Arboretum book), as follows

I also continued editing for Literary Mama, kept up with my nature writing group, taught a nature writing class and five nature journaling workshops, and I wrote 95 posts for this blog, which turned eight years old in November.

Travel: We hiked the Colorado Trail!!! (did I mention that already?)

Nature: I didn't make any great progress learning about any particular realm of our natural world, but I was very attentive to trees and flowers and rocks while hiking the Colorado Trail.

Craft: I made four sleeping quilts plus stuff sacks and beanie hats for our hiking trip. I didn't knit an item per month this year, but I did knit a few things (will have a  wrap-up knitting post soon), and made a few odds and ends.

How about you? What are you patting yourself on the back for this year?
Posted by Andrea at 8:01 AM

Email ThisBlogThis!Share to TwitterShare to FacebookShare to Pinterest
Labels: i did it, New Year, published work, writing