You've heard of the Slow Food movement, yes? Well, I'm a member of the Slow Writing movement. Three years ago, come April, I attended a Psychedelic Furs concert in Portland with a friend. (The poster, which I, er, liberated from a wall downtown has been hanging on the side of a bookcase ever since.) 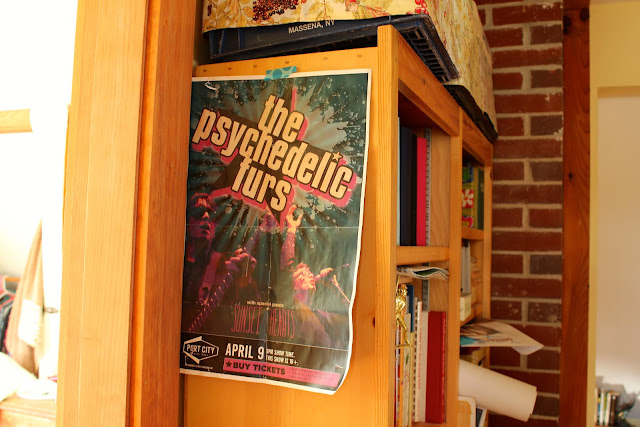 There were several things about my experience at the show told me I had a story there, and so I started writing down my initial memories and impressions right away. After a while, though, I got bored with my writing, and felt it was going nowhere, so I set it aside.

Several months, maybe a year, later, I opened the file again and though, Hmm, maybe there is something here after all. I continued to work on the piece off and on until I finally finished and hit "submit" one month shy of two years after the concert. I'd had a place in mind to which I wanted to submit from the very beginning and I had high hopes of it getting accepted there, but I waited. And waited. And waited. After six months I sent the nudge email and got back a "thanks but no thanks" for my trouble. Over the next few months, I sent it out to seven more places, getting rejection after rejection (but at least on a faster timeline). Finally, after a total of six rejections, The Manifest Station picked it up and it appeared on their site yesterday.

A funny thing happens to writing that's been sitting around a long time—you fall out of love with it. You start to notice nitpicky problems. It no longer resonates. But, not this time around. I'm happy to report I still enjoy this piece and I'm happy to see it finally out in the world. I hope you like it, too.
Posted by Andrea at 11:43 AM