It's taken a long time to get E and Z's room spiffed up for them since M moved into his own room last November. First we had to spackle and repaint the ceiling and walls, which took most of February. Then we had to clean out the closet, into which I had shoved everything but the beds and dressers before we painted. All the furniture, toys, books, and random junk had to come out, get sorted into piles for keep, toss, give away, and store. Then I had to paint the walls. Then I had to put everything back, arranged neatly (notice how I drop the "we"—we all know who exactly did most of this work). 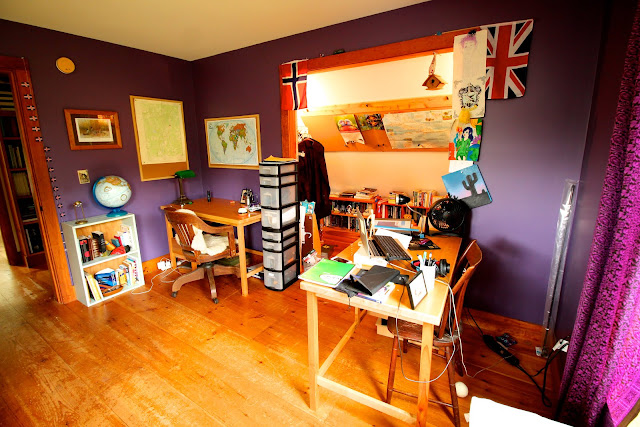 Meanwhile, C was busy in the garage building new desks for the nearly high-schoolers, all from scrap wood (inspired by a butcher block counter that my inlaws were replacing). We each finished our respective jobs right before our trip to D.C. in early August, and since then the room has been arranged, enjoyed, and made messy cozy again. 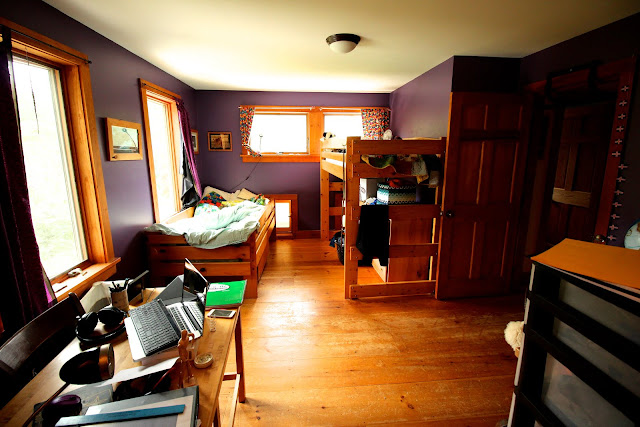 Two small items remain to be done: a switchplate for the closet light swithc (I was going to decoupage one with old maps, but Z, who is really into maps, tells me this would look tacky) and curtains on the small windows (I have a third purple Indian-print panel, which I need to make into two half-panels, but right now my sewing machine is inaccessible due to all the stuff I've "cleaned up" from the rest of the house having accumulated in my bedroom). 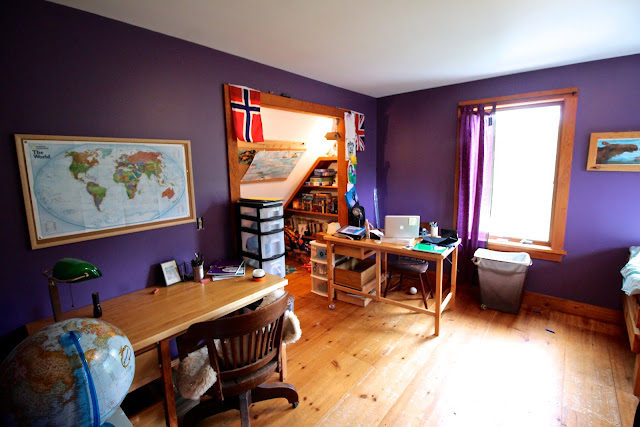 I was hoping that after they saw how tiny M's dorm room is, E and Z would have greater appreciation for the expansiveness (and hominess) of this space, but still it does not seem to be big enough for the two of them, and most study sessions turn into Nerf gun battles. So much for that soothing purple color.
Posted by Andrea at 11:16 AM