A monthly post about my progress toward finishing a very large stack of books. Past months' posts:
January 2021
February 2021 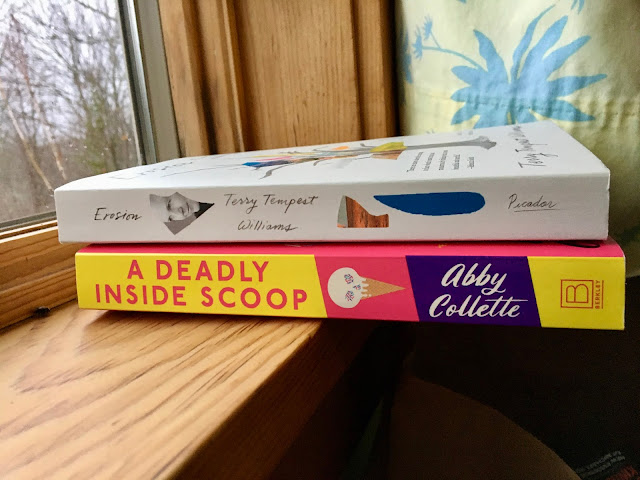 Last month's stack is another mini one. I'm getting cranky about how much work is interfering with my reading time (I've decided to stop blaming television and point toward the real culprit instead--capitalism).

Nonfiction: Erosion by Terry Tempest Williams. I've been a huge fan of TTW ever since I was assigned to read Refuge in college. Her writing is just so beautiful and searingly truthful. This one so much so that it hurt a little to read--about the realities of climate change and the abuses to wild lands by the fossil fuel industry and the previous administration. There's none of the cheery optimism so many nature writers feel compelled to tack onto the hard realities of we're basically f*cked. So yeah, a hard read, but a necessary one.

Fiction: A Deadly Inside Scoop by Abby Collette. This book, by contrast, was just pure fun--an ice cream shop, a murder (okay, maybe that wasn't fun for the murder victim), and a number of suspects, including the narrator's father...all tied up in a nice bow after a mildly suspenseful scene, in the best cozy style.

What are you reading this month?