My dream has finally been realized and the boys now have bunk beds! 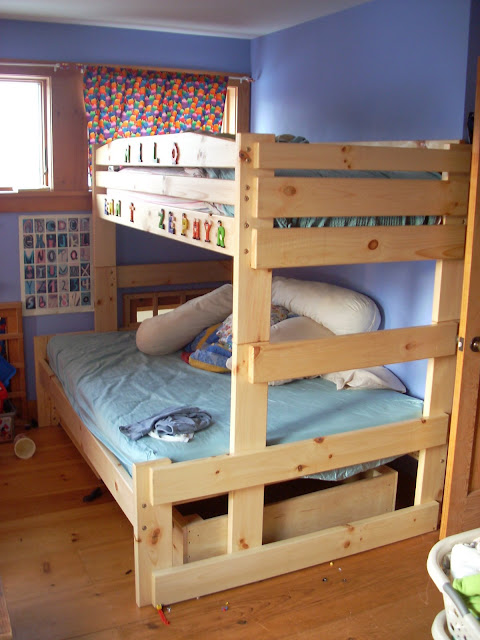 I didn't have to build them myself, after all, but neither did I convince C to build them...instead his dad had a free week back in February and built them for us (I ordered plans online and made him follow them, rather than randomly throwing wood together). The parts sat in our playhouse for close to a month waiting for C and me to get our act together and get mattresses. I really wanted something organic/environmentally friendly, but at ten times the price of the mattresses at the nearby discount furniture store, I couldn't justify it (now I know just where my limits are!) I did find organic sheets at Target for only $40 (rather than $140 or more), and I finally found organic cotton mattress pads online that cost less than the mattresses (I was on the point of despair and about ready to sew my own!) I was really annoyed, though, when they arrived in zippered vinyl bags. 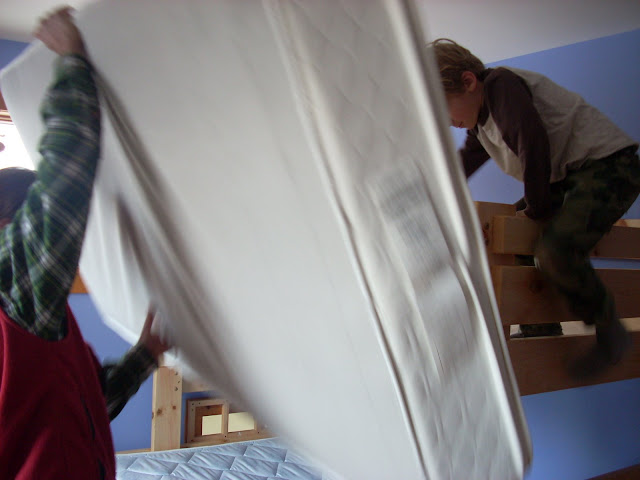 Anyway, back to the beds...the boys were THRILLED! M was a bit nervous about sleeping up top the first night, but I encouraged him to try it, and I think he's liking having his own space now (if only we could figure out a way to keep the brothers off of it).

This is where they slept before--in a puppy pile on this queen-sized mattress on the floor: 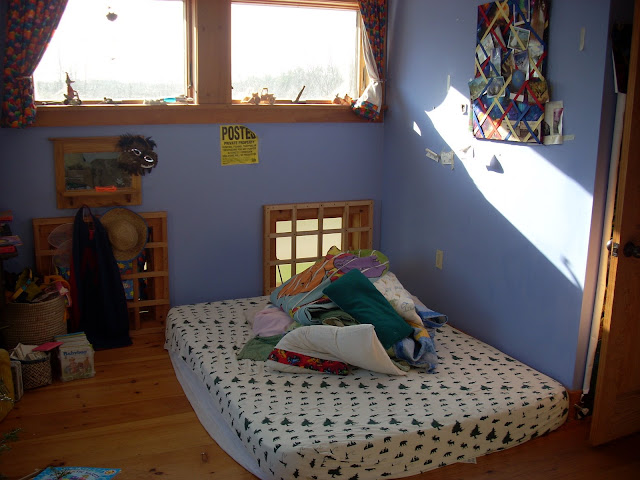 There are two big drawers under the bed. One I filled with extra blankets and sheets; in the other I hope to consolidate the multitudinous bins of Lego's, but haven't quite gotten there yet. 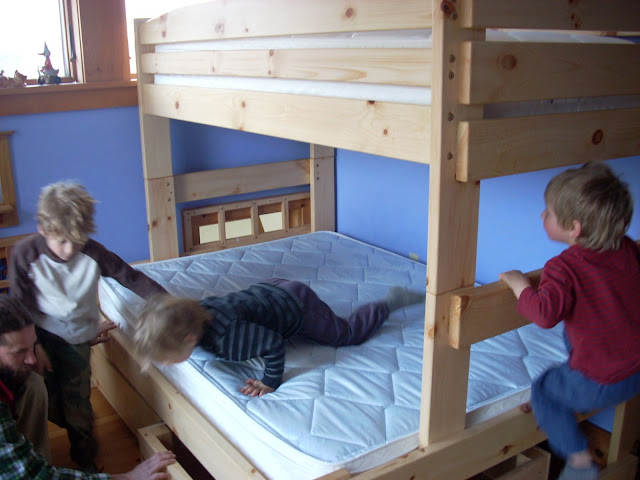 In preparation for the changeover, I tried doing a major clean-out of their room. I filled one big fruit box with books (duplicates, outgrown and generally crappy), another partway with toys and I eliminated one HUGE box of stuffed animals. All of this is waiting in a teetery pile in the basement for my friend's yard sale in June. Still the room seems sooo messy and full of junk...much of it Lego's, but also a lot of other crap that really needs to be sorted and eliminated. It's a bit early for the switchover from winter to summer clothes, but I'm hoping when that happens it will also help. 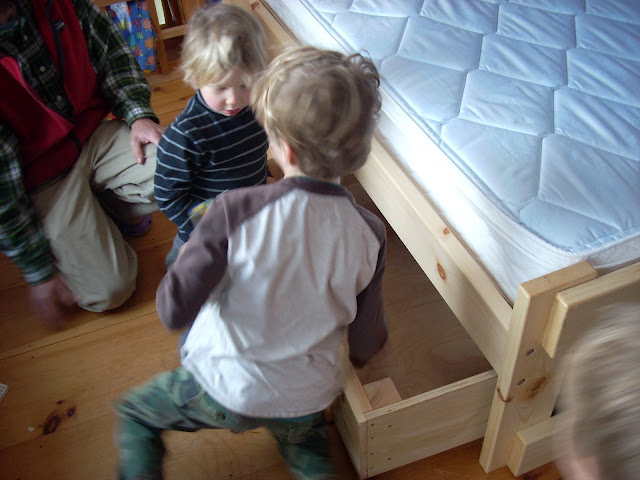 Yesterday I went on a mad-woman spring-cleaning binge in the downstairs part of the house...it was a gloomy rainy day and my choices were to pull the covers over my head and wallow in despair or get moving. I mean serious cleaning--dusting, washing windows, taking down all of the kids' artwork that's been accumulating on the sun room windows (we had stuff dating back to Christmas), sorting through my own books to add to the yard sale pile, rearranging the sun room furniture, folding laundry and organizing the kids' art supplies (happily I ran out of time before I got to the bathroom). I still feel driven by this compulsion that if I could just get my house clean enough--and eliminate enough of the junk and clutter--then everything will be OK. I know I'm not alone in this feeling, since there is an entire magazine and television industry devoted to this concept (not to mention professional organizers and fung shui-ers)...but here's the question: has anyone ever gotten that organized and did it actually make them feel better?
Posted by Andrea at 10:05 AM