I have strange dreams. At the same time vivid and fuzzy. They make no sense. They blend real and imaginary characters. They usually involve some sort of anxiety...being chased, or looking for something, or trying to get out of somewhere. When my babies were little, I was always dropping them in deep black oceans. But once in a rare while, a good idea comes to me in a dream (I have dreamed the plots to movies and novels and once a board game, but they never came back to me in any sensible way during the waking hours).

One night, many, many years ago, I dreamed I was leading a troop of scouts out in the woods, studying nature. Even their uniforms--dark turquoise vests--came to me in the dream. After I woke up, I came up with a name, "EarthScouts," and started up the first troop with my younger brothers, my youngest sister and my niece. C and I took them for a weekend morning or afternoon over the few months we lived nearby and did various environmental education activities. I made the vests and the patches they earned for our various activities--a worm for composting, a skull and crossbones for finding and labeling household chemicals, a recycling symbol for making recycled paper, a water drop for examining water in a nearby drainage channel.
Here are the original Earth Scouts are on a field trip to the zoo: 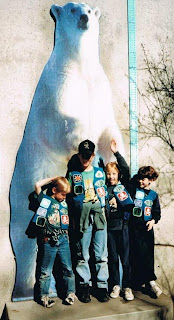 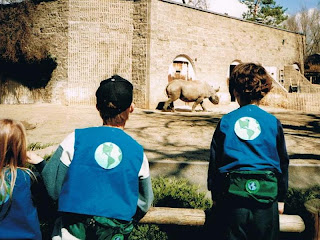 We saw this rhino poop (and a hippo too)...it was very thrilling.
(They are now 18, 19, 20 and 22 years old!)
I hadn't felt inspired to restart EarthScouts with my own children until February, when a package of books C had ordered for me for Christmas finally arrived at our house after globe-trotting since December 17. One of the books, I Love Dirt, is filled with ideas and activities for spending time outdoors with kids. It's a nice book, with neat, simple ideas, but I knew it would end up on a shelf unless I made some effort to actively use it on a regular basis. And so I remembered Earth Scouts--the twins are now old enough to concentrate on a guided activity for a few minutes, and we all need encouragement to get out and get moving on the weekends--we could have a weekly EarthScouts adventure, following the activities in the book. The book has 52 activities--one for each week--arranged by season. I decided to start the first weekend of spring, and make a concerted effort to do every one (in order when practical) every Sunday morning (since we now have baseball on Saturdays--ugh!)
I had enough fabric to make three more vests, and enough felt to recreate the EarthScout patches. I had thought briefly of getting wool felt and making them prettier with embroidery and such, but decided that the more environmentally responsible thing to do would be use the acrylic felt I already had. In fact, I could see this easily turn into an excuse to get more stuff, so my intention is to only use things we have on hand already--the I Love Dirt book, along with a dozen or so kids' field guides from our shelves, several pairs of plastic binoculars, along with various nets, magnifying glasses and bug jars, which I've been trying to gather together in one spot, but they keep migrating around the house. 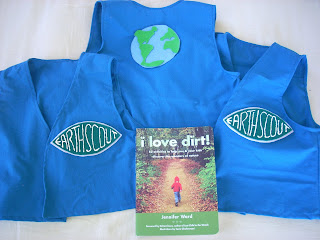 (I just noticed the EarthScouts patches look vaguely like Jesus fish, or the Du Pont logo...no similarity is intended.)

I did, however, also make these field bags, based loosely on these lovely embroidered linen foraging bags...mine are a little more utilitarian, made with blue canvas a friend of mine "rescued" from a load of fabric headed toward a dumpster (for shame!) and lined with blueberries, feathers and owls...just in case we want to carry water bottles or field guides with us, or collect acorns and shells when we're out. Really I just wanted something to put the little Earth patches on. 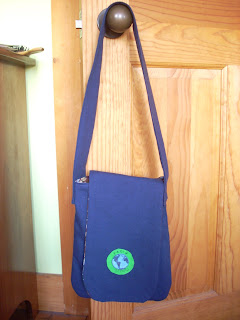 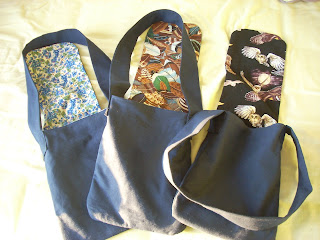 My intention is to focus on just spending time in close contact with nature in our own backyard, rather than learning about big ecological or environmental concepts. For patches, I think I'll do each season, and maybe certain areas of interest, like birds or frogs--not as rewards (I'm not a big fan of reward-based education), but as embellishments, I guess. I also want to invoke magical thinking and imagination, rather than scientific explanations for everything. Right now the idea is for them to breathe fresh air and feel the sun and rain and get dirt under their fingernails and between their toes, so that it becomes a part of them matters to them, later when they learn about those big scary things like climate change, or faraway places like the rainforest.
Posted by Andrea at 6:30 AM