On deck for October's addition for the Complete Whole House Declutter and Reorganize project was the sunroom. This is one of the most underutilized rooms in our house. Long and narrow, cold in winter, it mainly becomes a place for piling clean laundry that comes in from the line, which is off the deck right outside the sunroom door.

When I was thinking about what needed to be done back in September, the room was pretty much empty (other than piles of laundry), so I figured it would be a snap. Then frost threatened and I brought in all the house plants, and E and Z made a "set-up" with all of their little chairs and tables and a bunch of blankets and toys and things and no one bothered to clean it all up for weeks.

So this is the room I faced when my project began two weeks ago: 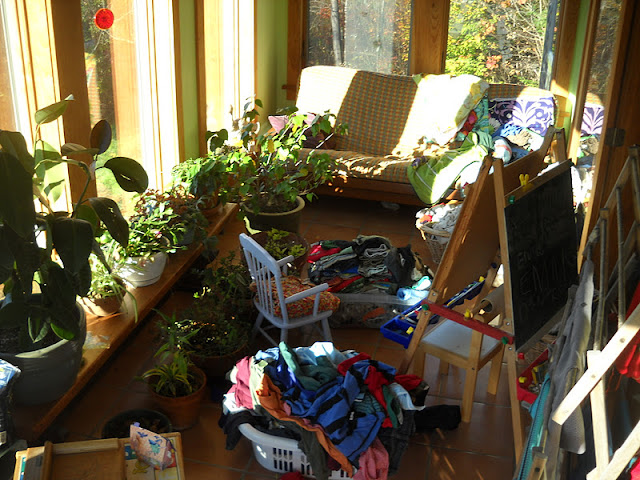 I managed to squeeze cleaning it up, dusting, evicting spiders, washing windows (Z helped--once C's mother swindled him out of $100 dollars for washing the windows in this one room; it's much cheaper to let a six-year-old do it for the thrill of playing with a squirt bottle) and even washing the floor (which still hasn't happened in the kitchen--I know: gross) in the few hours before and after our hike one Sunday.

The futon, which is generally covered in clothes waiting to be folded, was looking kind of dull and tired in this old cover a friend gave me a couple of years ago (when she noted that the even older white one was looking dingy): 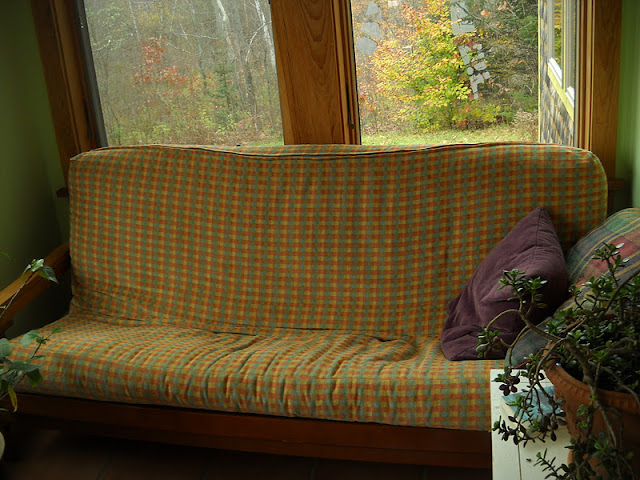 So I made a new one using big squares of decorator-weight fabric, which I sewed together and stitched to the old white futon cover (this was a lot more complicated than it sounds--between my woeful math skills, the logistical problems of maneuvering such large masses of fabric and the time I ended up sewing it on inside out). 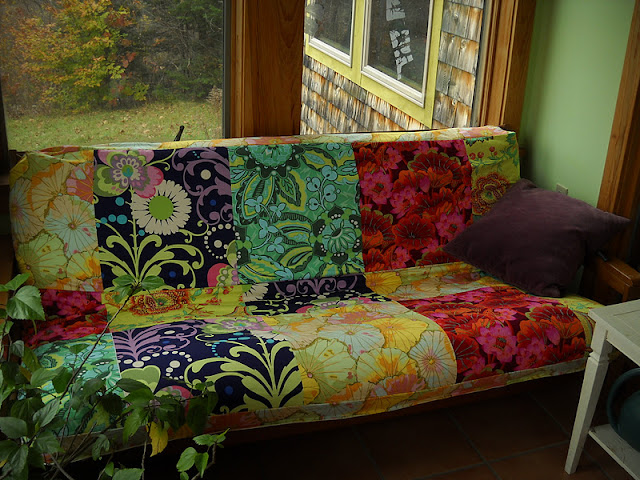 I've always wanted this room to have a bit of the feel of a Victorian conservatory. Part of that look, I think, involves really big floral prints. Of course wicker would be a bit more authentic than futon, but this room also doubles as our guest room, so one must be practical. 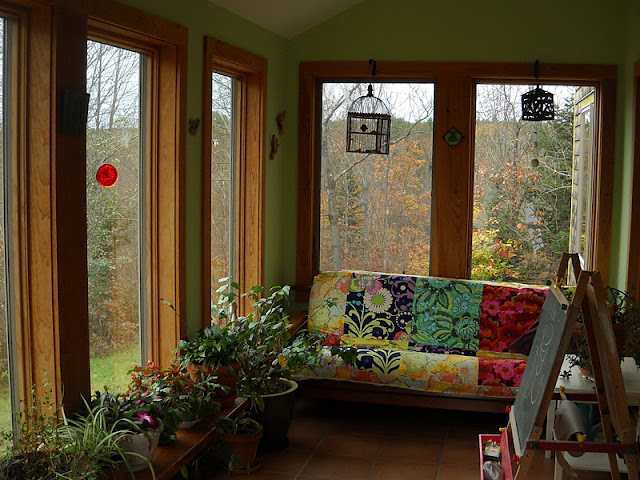 About two hours after I took these photos, all the laundry you see on the right edge of the photo below came in, along with the drying rack full of clothes (snow was on its way), so the room only had this open spacious feel for a brief spell. But I did refrain from putting the laundry on my pretty new futon, which is now my go-to place for lying about reading. Such a cozy room it is. 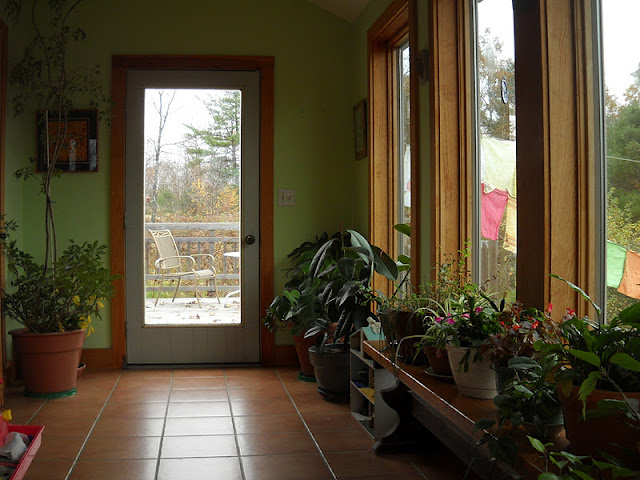 The old bird cage is part of the Victorian conservatory look, but Z and E have been begging for a bird to inhabit it. So I finally made one, with floral plumage and a red breast. It's a bit lumpy due to having been stuffed with fabric scraps rather than wool. And I have to tell you, when I first hung it up, I swear it turned to look out the window longingly. Even though the cage has no bottom so it could escape quite easily, it stays imprisoned in its cage (maybe because it has no eyes to see the bottomless cage--and no wings with which to fly). 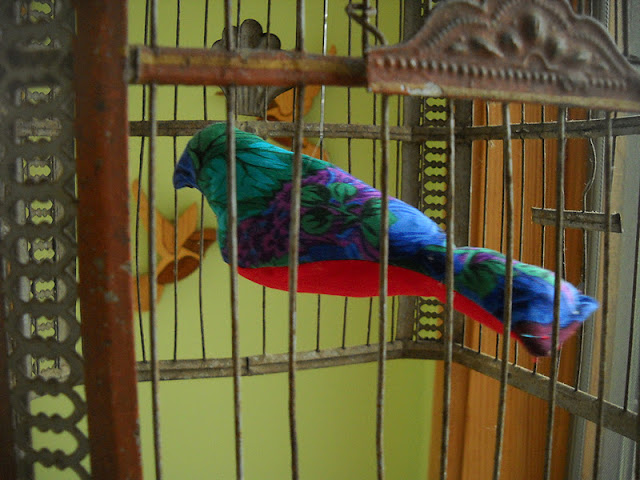 There's still the problem of the coldness in winter, thanks to all those lovely windows. C and I can't agree on how to treat them (he favors window quilts, which I think are hideous, and I would like cellular shades, which can easily open up and out of the way). We visited a friend this weekend who has heavy velvet drapes on her big windows, hanging by spring-loaded rods. This might be our solution (purple, perhaps? or light orange?): during the day we could heap neatly fold them into a laundry basket and at night they would keep it cozy and warm.

I'm quite pleased with the ease with which this room came together (very little clutter to begin with made for an easy decluttering). This month, the mudroom gets it.
Posted by Andrea at 6:29 PM