In the spirit of the Christmas Cookie Countdown (Week One, Two and Three) and the Christmas Book Countdown (Week One, Two and Three) that I did two years ago, this year I decided to unveil a different handmade craft (or two) each week, rather than showing them all off after it's over, and, in the process perhaps provide a bit of inspiration for last-minute crafters. Also, it may spur me on to get things done before the guests are pulling in the driveway.

First up, a pair of fingerless mitts knit for E and Z.


I had a bag of woolens that were waiting to be washed sitting by the downstairs bathroom for, ahem, a long time this summer, and Z kept stealing my fingerless mittens out of it and wearing them around the house, and he asked me to knit him his own pair.

I had two little skeins of mohair yarn that I bought last winter at the Yarn in a Yurt and it seemed like the perfect stuff for this project––blue for Z and rainbow for E. 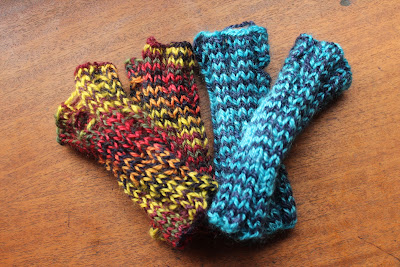 I started the first pair at my grad school residency in July, but I am just not a summer knitter and did not get very far. I was trying to use the "magic loop" method and kept getting frustrated, so I set them aside.

I picked it up again during soccer season and switched to double-pointed needles, but I only had metal in this size and between the slippery yarn and the slippery metal needles and my loose knitting, I kept dropping needles under the bleachers, and got frustrated again (but I did finish one mitten). After that I switched back to the magic loop method and got a rhythm going with moving the yarn along the wire and whipped out the other three during Call the Midwife and Upstairs Downstairs.

The pattern, roughly based on a pattern I found online (can't remember where), is:

The ribbing makes them nice and stretchy, so they will fit a range of hand sizes (I haven't tried them on the twins yet, obviously, but I think they will fit.

What are you making this season?
Posted by Andrea at 4:30 PM