Maybe you've noticed that I have a slight obsession with the weight of the gear we'll be taking on the trail. There's a very good reason for that. When we hiked the trail in 1996, back before the lightweight backpacking revolution (or at least before that revolution became known to the likes of me), I had no idea there was any other way to hike than crushed under a heavy load. Back before the internet was a daily part of our lives, I only had library books as resources for how to pack for a backpacking trip--library books that were at least 10 to 20 years old, even then, with gear photos that included shiny nylon external frame packs and waffle-soled suede hiking boots with red laces, flannel shirts and fishing poles. 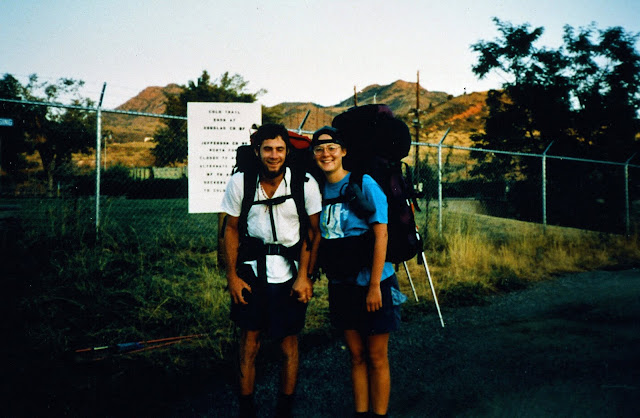 I have no idea how much our packs, which you can see but perhaps not entirely appreciate in this picture, weighed--we didn't even have a bathroom scale on which to weigh them. The packs themselves were internal framed, made of heavy cordura pack cloth, with lots of zippers and buckles and straps. Inside we carried: a four-season tent (which, to be fair, possibly saved our lives when we got buried under a foot-and-a-half of snow in a blizzard our last night on the trail); a stove and bottles of white gas, a two-pot stainless steel cook set; plus an extra stainless steel smaller pot/bow; a water filter; nalgene bottles; a water bag; candle lanterns and extra candles; town clothes; camp sandals; boot grease and a brush; books and field guides and a hard-cover journal; mini binoculars; a sleeping bag that I'd bought at army surplus before I went away to college (it was an improvement over the old flannel coleman bag I'd once had, but still quite heavy) in a compression stuff sack with no fewer than four straps and buckles; a fanny pack for side trips; C had his Thermarest, me a Z-rest, which may be the only lightweight thing I took along (but also not that comfortable). My pack was like Cheryl Strayed's Monster, only I never adjusted to its weight. I hurt the whole hike. Just thinking about that pack (which I think is still in our barn somewhere) makes my hipbones ache. 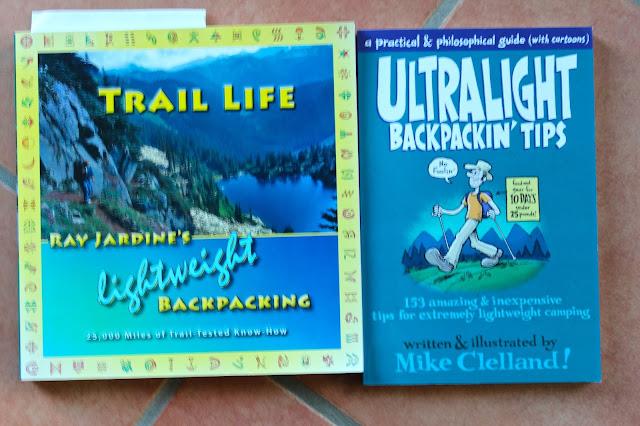 Not long after we finished our CT hike, I learned that there is this thing called lightweight backpacking. C and I watched a video about it and immediately started putting the principles into place (primarily leaving stuff behind) and I've been reading about and researching it all these years, even during our 13-year backpacking hiatus. My primary resource has been Ray Jardine, godfather of lightweight backpacking (and manufacturer of my quilt kits). He can be a bit over-the-top, but his books have a lot of good information and he doesn't sacrifice good nutrition or enjoyment of the wilderness in favor of the pursuit of gear. I also recently picked up the shorter and amusingly illustrated Lightweight Backpackin' Tips. From this book I found the idea for dehydrating toothpaste to make "toothpaste dots." So far mine hasn't dried out too well at room temperature, so I'll stick it in the solar oven this weekend and see what happens. 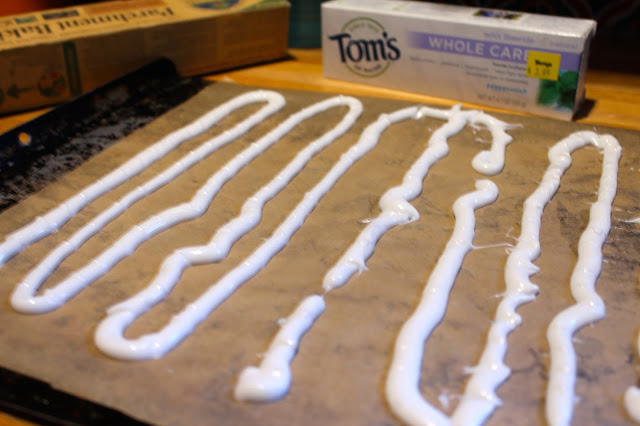 I haven't quite reached the purist level of either Jardine or Clelland. I like stuff sacks. I like having a well-stocked first-aid kit and a pocket knife. I prefer a non-chemical water treatment. I want more than one "luxury"--for me it's my phone (which I wasn't going to take but changed my mind mostly so I can check email in town to see if I've had any writing accepted; I also downloaded books to read to E and Z on it so it can do double duty), my journal (still deciding what drawing implements I'll take) a camera (just got a new one which, compared to my DSLR, is wicked light), and a couple of laminated field guides. We did a dry-run packing our packs this weekend, to see how all the gear fit and how much they weighed. I still haven't finished C and M's sleeping bags, I didn't have my camera yet and somehow forgot to include Z and E's cameras, there are a few small first-aid items I need to get, and I've also decanted soap and sunblock into smaller containers, so these weights aren't the final numbers, but here's how it came out, base pack weight (i.e., without food and water): 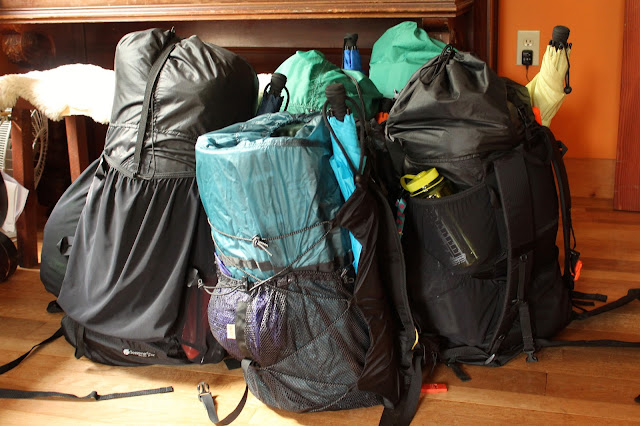 I'm pretty psyched that we came out this low. Not quite the 10-lb holy grail of the lightweight backpacking crowd (and that's for people who carry all their gear--stove, shelter, water treatment--and don't share it around!!), but not bad. With food for five, for up to eight days at a time, C and I are going to have a serious amount of extra weight on top of the base, so any further trimming we can do would be fantastic (I'm sure there are some more tags I can cut off somewhere!!).
Posted by Andrea at 6:43 PM