So I meant to tell you about our latest house project when it first happened, weeks ago. I don't know what happened. But I do know, that I love it nearly a month in. I've been thinking for a while that we needed some kind of storage unit back in the corner of our kitchen, by the refrigerator and a wall of shelves that hold various nonperishable foods. Something to hold fruits and vegetables, which generally get stacked up in baskets on the blue hutch, creating all kinds of clutter. 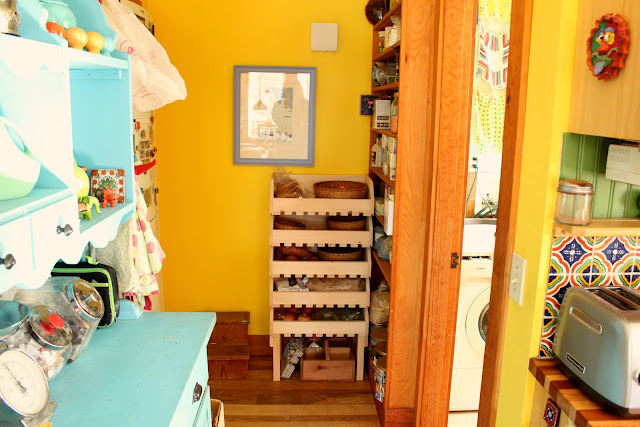 C asked me to draw up a design and I happened to run into a picture of "European Market Crates" which I had cut out of an old William Sonoma catalog ages ago, which seemed to fit the bill perfectly. We made a few modifications, making them wider, but shallower (from to back) and slightly taller. We also raised them up on a base, under which we can slide empty egg cartons, which we return to the farm store, and the caddy of milk jars we take back and forth to the farm where we get our milk. 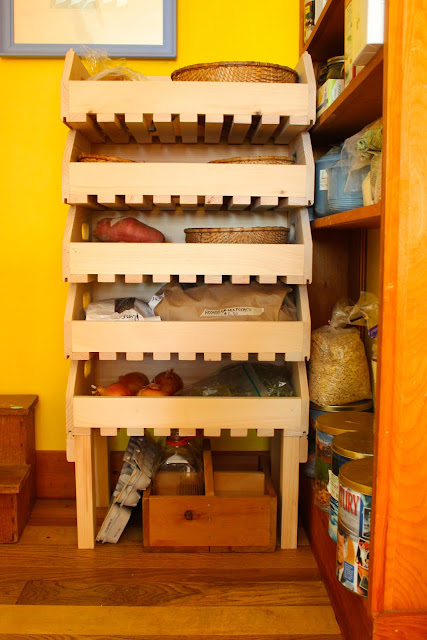 Each crate is separate, with tongue-in-groove sides so they lock together and hand-holes on the sides, so you could pick them up if needed. They also have slatted bottoms for ventilation, which will hopefully help keep produce fresh. Unlike the William and Sonoma crates, which cost $40 15 or so years ago, these were totally free (except one or two days of C's labor). 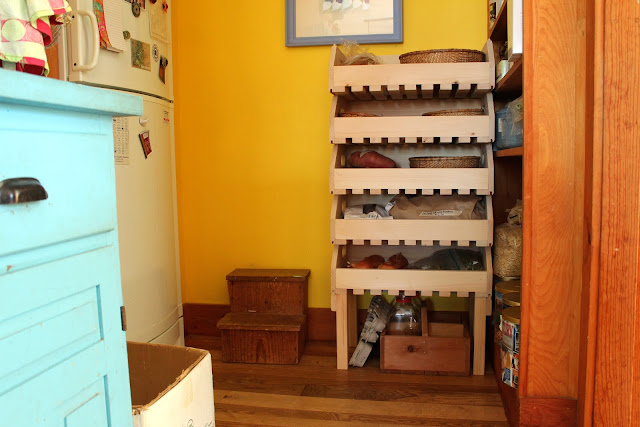 They're going to come in extra-handy during summer harvest season. The only downside so far is that the space between crates is kind of small, so it's hard to get things like bags of potatoes and oranges through. Also, I worry that things could get forgotten about in there and rot, though we haven't had this happen yet. And my hutch is delightfully uncluttered, so that I can use it for other things, like lining up desserts during parties.