On Saturday we headed to the nearby town of Gardiner for a stream cleanup/awareness raising event, put on by the organization Upstream, which was created by my fabulous friend and fellow naturalist Tina Wood to restore fish passage around the three dams that block Cobbossee Stream.

I had originally thought I would go to Boston for the March for Science, but as the time drew nearer, I became less and less enthused about the drive…and even the March itself. Yes, I support the responsible use of science, I oppose hiding, burying, denying, failing to fund, or destroying scientific research. But the idea of a march for science had me feeling a little ambivalent. Because science is not inherently good (or bad), but science can be put to good use, for the betterment of humanity, or it can be abused for financial gain while hurting people and the environment. And that's way too complicated a message for a picket sign. 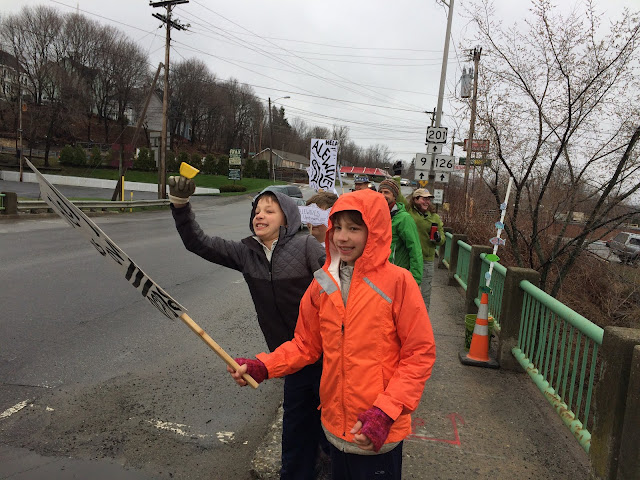 Also, the three hour drive on Earth Day didn't sit well with me. So I was happy to join Upstream and their event, which had a clear focus and end goal for the day—get the trash out of the stretch of stream between Bridge Street and Maine Street—and long-term—get the alewives back to their native breeding grounds in Cobbossee Lake. 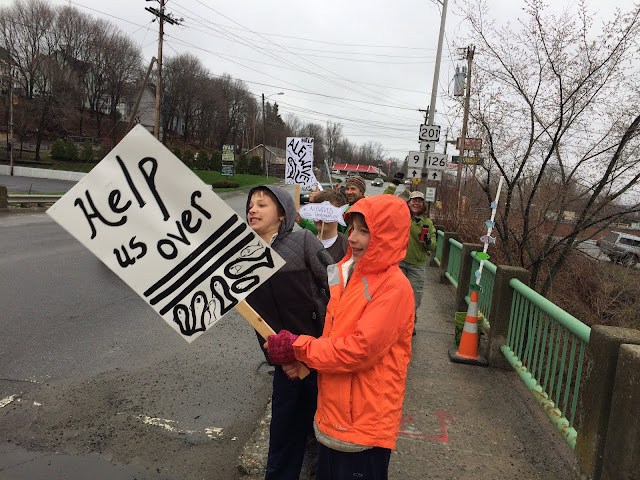 C, E, Z, and I were joined by the boys' best buddy and his parents. We left the kids on the sidewalk to ring cow bells and hold signs with the other marchers while us grownups headed down to the stream banks to fill up several large garbage bags with cigarette butts, Dunkin' Donuts cups and straws, sodden sweatshirts, and random hunks of plastic. The worst we found was four hypodermic needles and this bird's nest, made of strands of vine, fine rootlets, and cigarette pack wrappers. 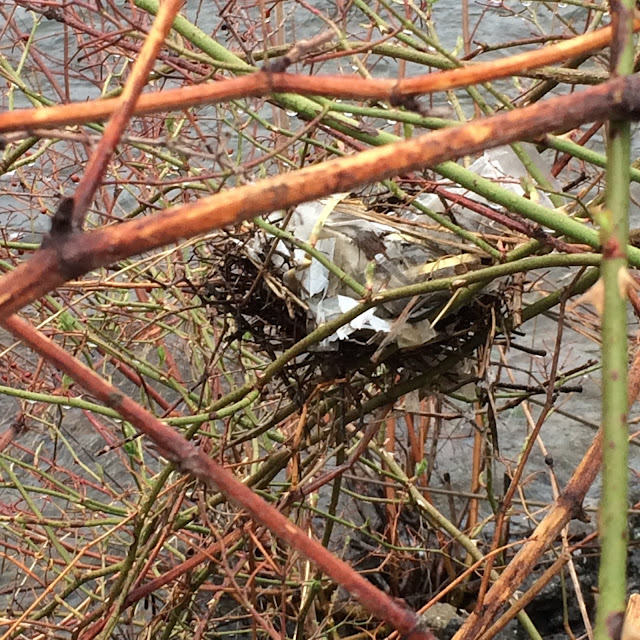 The previous day, I had attended a poetry festival which had included a panel on poetry and climate change. The panelists spoke of nature poetry becoming more elegiac, and one said she had trouble writing a poem of celebration after the large dams were removed from the Penobscot River and fish passage restored. The big question in the room was: where was the hope? As I scrambled up and down banks, invasive multiflora rose brambles clawing at my jacket and my skin, filling my bag with other people's garbage, it occurred to me that hope is in action. In cleaning trash out of one small section of stream. In ringing a cow bell to let passers-by know that people are out there working to bring back the fish. In restoring anadromous fish runs that have been blocked for more than 250 years. 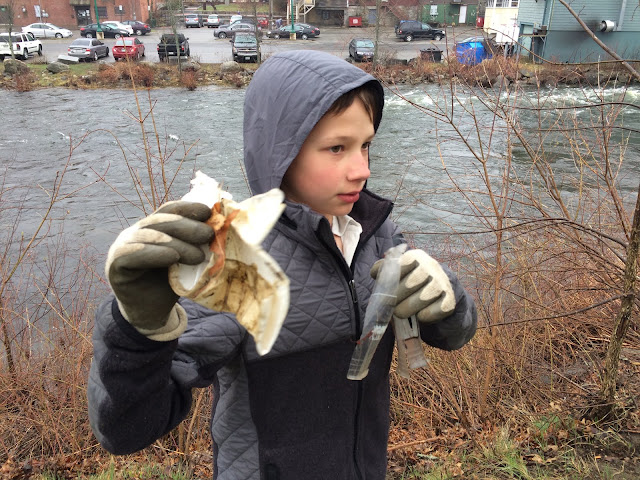 There's a lot to despair about these days, for those of us who care about clean air and water and fish passage and birds not nesting in garbage, who want more love and inclusiveness in our human communities, but nothing good comes of despair (I think in some ways despair brought us to where we are now—the despair of people who have been left behind by the modern world, looking for  an "other" to blame and a quick ride back to imagined "golden days"). The antidote to despair is hope, and hope comes from action. So we must go out and do the work that is important to us, and we must write poems about our work and our hope. We must write poems that celebrate being alive and all of the small victories we achieve, even if it's only cleaning up one small section of stream.
Posted by Andrea at 11:32 AM