We had planned to go camping at Hermit Island for the long weekend, as we've done for the past few years (and as we used to do the weekend prior for many years before that), but when I got home Friday evening with our camping groceries, I found a deficiency in enthusiasm. I was myself slightly reluctant about the prospect, only because the weather didn't bode well (although the weather in May is never what one would call promising). Most of the time, it's my job to encourage reluctant homebodies out of the house, but when my own enthusiasm is less than 200%, I don't have the energy to overcome the inertia of the other four. So we decided to hold off until the following weekend, which at the time looked like it would be warmer and sunnier (it turned out we got a sunny, if not exactly warm, Saturday and Sunday, and a cloudy and cold, but not rainy Monday, and now next weekend's weather looks even less promising). 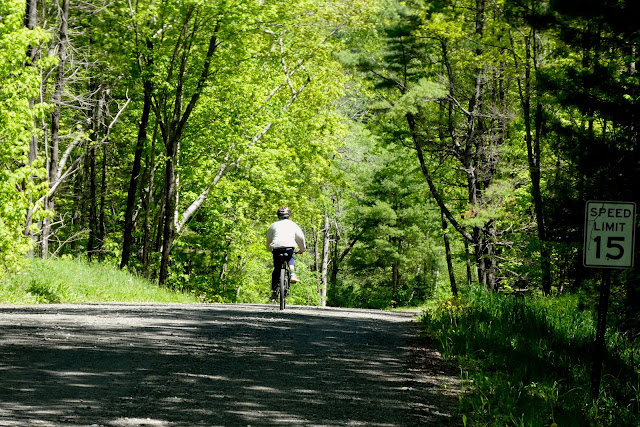 Once we made the decision to bail postpone, I insisted that we wouldn't just sit around home all weekend. So on Saturday, we loaded five bikes into C's work truck and headed to a nearby recreation area. I realized once we got there, that this was the FIRST time we've ever gone biking as a family. There were always too many obstacles to overcome—a baby and then two babies, with no baby seat or trailer, and then too many bikes to fit in the car. C took the boys to the rail trail a few times when they were small, and various configurations of some of us have biked in the local area (though there aren't too many places to bike TO around here, and I'm a big fan of having a destination, especially if I'm going to take my life in my hands on the road). And then last week, I went bird-watching at this preserve with a friend and realized it would be a nice place to bike, then C mentioned taking the bikes camping—in his truck, which had never occurred to me before, and it was a done deal. I still had to overcome a lot of inertia, but we made it. The weather was perfect (cool, no bugs). The roads were steep, but it was downhill on the way back to the car. Lots of trails crossed the road, so C and M could go off-road when they wanted. I even got a good look at this prairie warbler: 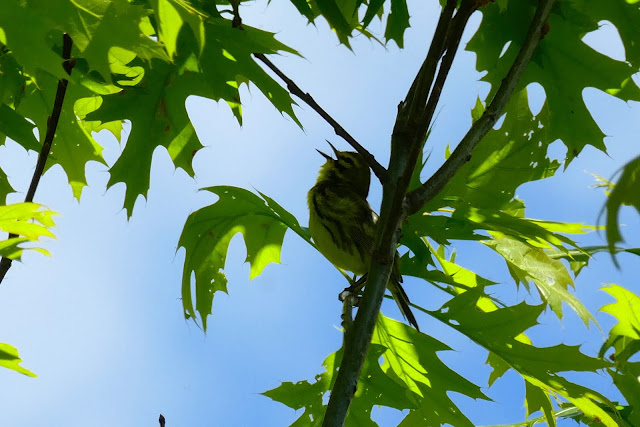 Everyone even had a good time, despite themselves (afterward, E said, "That was fun. Let's never do it again.").